The last week has been a Bad one for the former billionaire’s sockpuppet Milo Hanrahan (AKA Milo Yiannopoulos / Milo Andreas Wagner). After the collapse and implosion of his tour Down Under with fellow right-wing blabbermouth Ann Coulter, tour organisers AE Media (AKA Ben and Dan Spiller) released a tranche of documents which detailed some of their correspondence with the falling star. Among other things, the d0x revealed that Hanrahan/Yiannopoulos/Wagner is $2 million in debt; Milo responded by claiming that he was in fact in $4 million in debt, and that this was a sure sign of his entrepreneurial brilliance.

As an alternative means of fleecing his flock, Milo then started a Patreon account — which was closed within 24 hours. Before it was shutdown, however, at least one amusing exchange did take place: 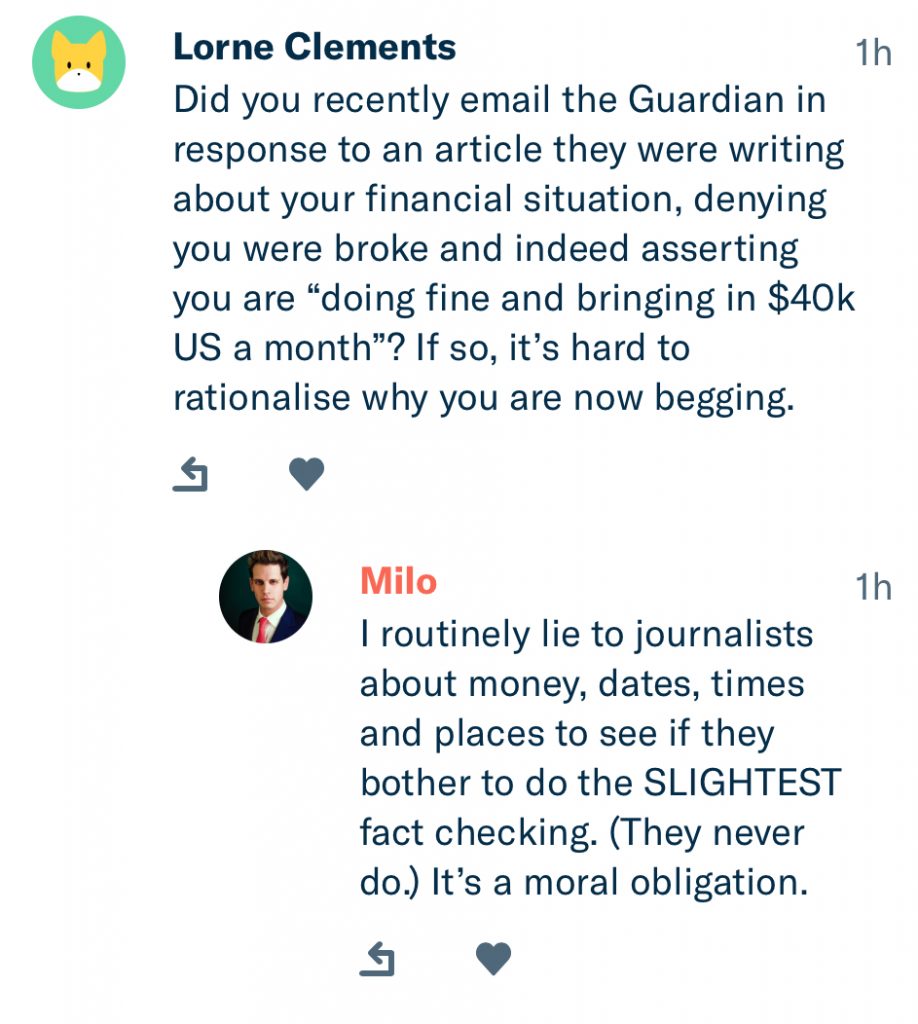 Given his financial situation, the pressure on Milo to return to Australia to milk some more money from his meatheaded Australian followers is rather high: it’s been claimed that over 12,000 tickets were sold for his 2017 tour, generating over $1 million in revenue. And while Milo can rely on Newscorpse to once again function as his PR company should he return, the d0x also reveal that relations with Damien Costas have deteriorated greatly since December 2017 (see below).

Hope Not Hate in the UK has also been trawling through the d0x, and you can read their reports here: Milo Yiannopoulos’ debt crisis (December 2, 2018); “Milo comes first, at all times” says Milo Yiannopoulos (December 3, 2018); Show me the money: detailing Milo’s debt (December 4, 2018). Apart from underlining the fact that the billionaire Mercers poured millions into Milo so that he could produce propaganda on their behalf (see also : Islamophobia Inc, Al Jazeera, May 14, 2018), it too draws attention to the mutual contempt in which Milo and Damien Costas hold each other. Thus:

“I was defrauded by Damien Costas. Neither he nor anyone else that works for him will have anything to do with running any tour of which I am a part. This is not negotiable”.

Evidently he has thought twice about his position, although it is unclear if he still stands by his words about Costas.

Apart from money, there’s also media. On his December 2017 tour, Milo was invited to federal parliament by proprietarian Senator David Leyonhjelm and onto the screens, pages and airwaves of various Newscorpse media properties (among others):

Of particular interest in this context is the close collaboration between Costas and said media properties in managing publicity for the current tour. Hence in October 2018, upon being informed that Yaxley-Lennon might be prevented from coming to Australia because of his legal situation, Costas wrote ‘I will inform Miranda Devine’. A week later, Costas arranged for news of the tour to be featured in The Daily Telegraph: 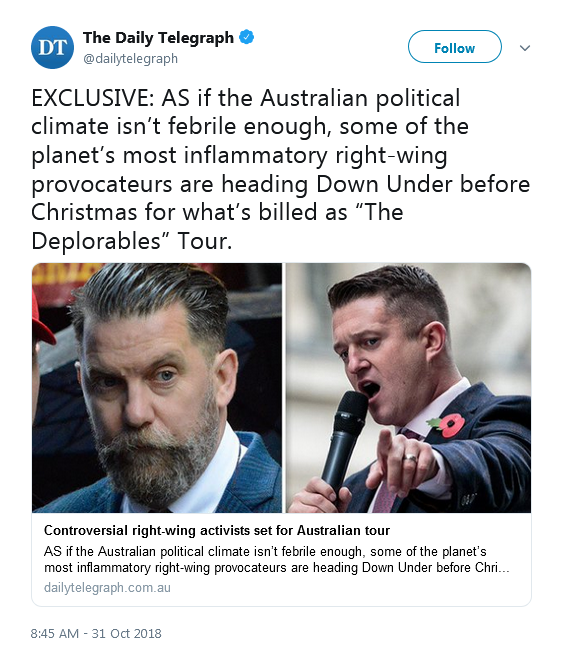 Of course, Andrew Bolt isn’t the only propagandist to fanboy over Milo. When in June he declared that killing journalists was a neat0 idea, for example, neo-Nazi site The Daily Stormer applauded his political acumen:

Oh, Costas also describes the owners of the venues he’s booked for the tour (and to whom he’s paid $170,000 for the privilege) as a bunch of greedy “cunts”:

Speaking of greedy kvnts, Milo suggests in this message that, if the Spillers are having trouble, they should just go to their Mummy & Daddy and ask for another $200,000 to help them organise the tour (and meet Milo’s extravagant lifestyle expenses):

Managing and staffing the tour was another point of contention between the two sides, with Milo wanting to employ his mates, including Will Bracey (tour manager), Anthony Barlow (administration), Jessica Seebauer (administration), Brandon Ellyson (ticketing), Max Markson (venue booking), Caolan Robertson (marketing and promotions), Chadwick Moore (speech-writing) and Tom Packer (technical). Oddly, in correspondence dated October 10, Ben Spiller assures Milo that: ‘After chats with a couple of my project managers I’m confident that as we continue with what we had been planning (warehouses etc) we will be fine, and my guys are already on the Tank businesses payroll. They’re on it. If we do a deal with Penthouse, then we will use one of their project managers.’ (This obviously did not please Hanrahan, who responded: ‘Are you out of your mind?’.)

As well as revealing his address in Doral, Florida, the d0x also name Milo’s husband, John McKinley-Campbell, a PhD student in social work at Florida International University (note: this infos has been circulating online for some time). Curiously, among the many debts Milo has accrued is one from the Four Seasons Hotel in Hawaii where the pair were married in September last year. In the d0x, Milo complains that he was in such financial straits that he had to return John’s $20,000 wedding-ring to Cartier; they also reveal that he owed over $52,000 to the hotel for the ceremony. On the bright side, the Spillers treated Milo to a holiday in Hawaii in June (to Turtle Bay Resort, not the Four Seasons, obviously), which seems to be when serious planning for the tour commenced. (Of course, being indebted doesn’t mean that one has to reduce one’s expenditure, does it?) 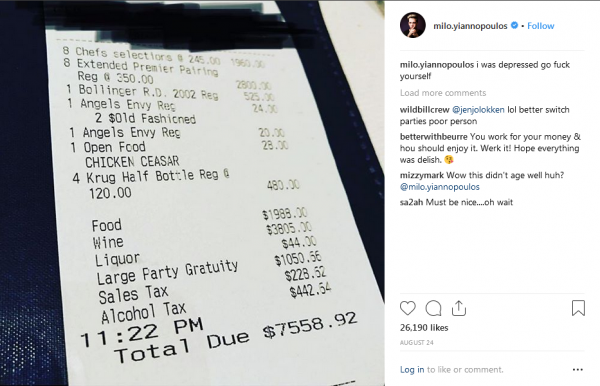 On a final note, Milo uploaded a video to YouTube (Australian tour news!, streamed live on November 28, 2018) to provide his side of the story. In addition to describing the Spillers in very unflattering terms (and without a word against his BFF Costas), Milo also manages to provide a screenshot of his WhatsApp. Included among his correspondents in the group is Evgeny Lebedev, son of the Russian oligarch Alexander Lebedev and the media mogul who owns the Independent and the London Evening Standard. Lebedev met with Milo in London in November last year. ‘The meeting raises questions as to whether Lebedev is considering business opportunities with Yiannopoulos, who recently was exiled from US-based website Breitbart after an in-depth BuzzFeed News investigation exposing the ties between the British tech journalist, website chairman Steve Bannon, and the political alt-right’ (The Russian Owner Of The Independent And The Evening Standard Met Milo Yiannopoulos In London, Mark Di Stefano, Buzzfeed, November 23, 2017).

Finally, as far the other two racists Costas is (still) promoting as touring Australia in February 2019 are concerned, the former chief Piss Boy has also been experiencing some troubles of late. After having been denied a visa to enter the country, at the beginning of December McInnes joined Blaze Media, a new propaganda outlet that merges Glenn Beck’s TheBlaze and Mark Levin’s CRTV. About a week later, he was unceremoniously dumped. And more recently, YouTube has also kicked McInnes to the curb. Still:

The organiser of Gavin McInnes’ scuppered Australian tour is calling on police to investigate immigration authorities for allegedly informing media the right-wing commentator’s visa had been denied before the applicants were notified.

Penthouse Magazine publisher Damien Costas said this week he had instructed his legal team to refer the Home Affairs Department to the Australian Federal Police over “what can only be described as a blatant breach of privacy and policy”.

In the meantime, the legal dispute between Costas and publicist Max Markson has come to a head in a Sydney courtroom:

In this case, it’s hard to know who to feel sorry for.

Costas’s company, now named Global Media & Entertainment but earlier known as Filthy Gorgeous Productions, reckons they’d come to an agreement to have the costs of the tour audited.

Too bad they couldn’t get the paperwork right.

And too bad they decided to go with Sydney barrister (and bankrupt) Charles Waterstreet.

The matter was scheduled to be heard by Justice Guy Parker on Friday.

CBD is no stranger to filing right before deadline, but this one’s something else.

At 6.52pm on Thursday, well after the hard working servants of the Supreme Court had departed, Waterstreet emailed Parker’s associate to tell him, well actually, he wouldn’t be showing up.

“It is with my sincerest apologies I inform you I am unable to attend court tomorrow for this matter. I have another matter that I must appear for. I have been unable to secure a solicitor to stand in place for me,” Waterstreet wrote.

But no joy for Costas, who had his move to quash the $63,000 claim thrown out on the spot. 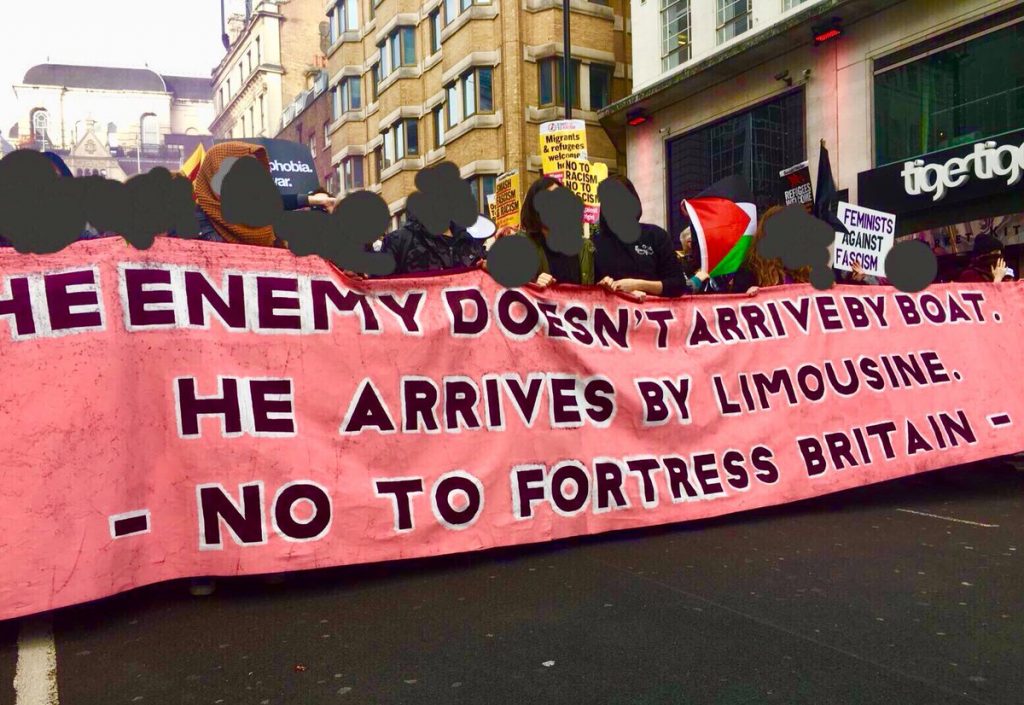 As for Yaxley-Lennon, he and his zombie followers in UKIP held a rally in London on Sunday, instructing Theresa May to hurry up and get Britain outta the EU. Several thousand joined him on the day, but then so did many thousands more turn out in order to #StopTommyRobinson. See : #London: Inspiring day for anti fascists opposing ‘Tommy Robinson’ & UKIP, enough is enough, December 10, 2018 | Anti-racist marchers in London claim victory over far-right protest, Damien Gayle, The Guardian, December 10, 2018 (‘Brexit betrayal’ march led by Tommy Robinson heavily outnumbered by opponents) | Paedophilia, rape and ‘grooming gangs’: Why feminism, not the far right, is the answer, Plan C London, December 5, 2018.

It’s also been revealed recently that Yaxley-Lennon is one of numerous beneficiaries of the corporate propaganda supply-chain:

The British far-right activist Tommy Robinson is receiving financial, political and moral support from a broad array of non-British groups and individuals, including US thinktanks, rightwing Australians and Russian trolls, a Guardian investigation has discovered.

Robinson, an anti-Islam campaigner who is leading a “Brexit betrayal” march in London on Sunday, has received funding from a US tech billionaire and a thinktank based in Philadelphia.

Two other US thinktanks, part-funded by some of the biggest names in rightwing funding, have published a succession of articles in support of Robinson, who has become a cause célèbre among the American far right since he was jailed in May for two months …