In the Name of the Fatherland, and of the Reich, and of the Holy Spirit of Capitalism, Amen

Polish state authorities obviously take this shit more seriously than do the Australian. EJP reports that ‘Hundreds of neo-Nazi CDs seized in Poland’: “WARSAW (EJP) — Customs officers in Poland have intercepted a parcel containing hundreds of neo-Nazi CDs on its way from the United States to Germany. Officers in Wroclaw opened the package to find 300 CDS with neo-Nazi lyrics and illustrations, after they were posted on by a Polish resident, named only as Bartosz J, in the south-western town of Opole… Bartosz J. faces two years in prison for propagating Nazi material.”

Australian Employer Too Exploitative Even For the OWS!

Speaking of exploitation, Michael Bachelard writing in today’s issue of The Age reports that the Hawthorn printing firm Aprint (255 Burwood Rd, 9819 9100) has been penalised $93,000 for taking ‘unfair advantage’ of workers imported from China (under the widely-abused regime of ‘457 skilled worker temporary migration visas’. For more, see the AMWU site).

And in preparation for the upcoming Victorian state election (Saturday, November 25), the Victorian ALP brains trust that delivered a seat in the upper house last federal election to Steve Fielding of the Christian far right Family First is debating whether to do so again.

According to the Victorian Greens:

In the 2004 Federal election, the ALP, Democrats and Liberals for Forests preferenced conservative Christian Family First Senate candidate Steve Fielding ahead of Greens candidate David Risstrom. The Greens got 243,580 primary votes, and Family First got only 53,032 primary votes. However, Steve Fielding was elected to the Senate on preferences, predominantly those from the ALP. He went on to provide the Howard government with the crucial vote it needed to introduce regressive Voluntary Student Unionism legislation. This legislation was opposed by Greens, Democrats and the ALP.

And more recently, Steve put Australia’s richest families first with his support for further media monopolisation. However, not everyone is appreciative of Steve’s efforts on behalf of the rich and powerful, it seems, as according to The Age, “hackers” struck the party’s site today, and when I checked I got this message:

The person (or persons) responsible for this outrageous attack has (or have) obviously forgotten that Hacking Far Right Christian Websites Makes Baby Jesus Cry.

More generally, Fielding and Family First, as well as other Christian fundamentalists such as the Exclusive Brethren, enjoy playing the role of Christian soldiers, not only for Jesus H. Christ, but his ally here on Earth: big business. Both forces seek to drive a wedge between the ALP and the Greens; Family First and big business quite openly, the Exclusive Brethren through more covert operations. Both also seem to greatly fear the mildly reformist political program of the Greens, although only slightly more, it seems, than does the ALP. For an incisive analysis of the religious right’s recently elevated role in state and national politics, see Amanda Lohrey, Voting for Jesus, QE #24, June 2006. 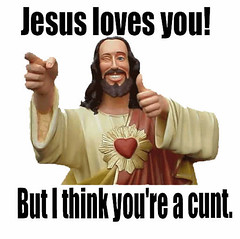 I live in Melbourne, Australia. I like anarchy. I don't like nazis. I enjoy eating pizza and drinking beer. I barrack for the greatest football team on Earth: Collingwood Magpies. The 2023 premiership's a cakewalk for the good old Collingwood.
View all posts by @ndy →
This entry was posted in Anti-fascism, Music, State / Politics. Bookmark the permalink.