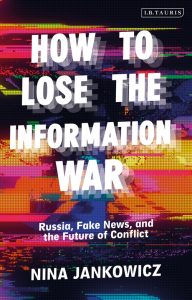 On this week’s episode of Yeah Nah, we talk to Nina Jankowicz [Twitter], the disinformation fellow at the Woodrow Wilson Centre for Scholars and the author of a new book out this week, How To Lose The Information War (I.B. Tauris, 2020):

Since the start of the Trump era, the United States and the Western world has finally begun to wake up to the threat of online warfare and the attacks from Russia. The question no one seems to be able to answer is: what can the West do about it?

Central and Eastern European states, however, have been aware of the threat for years. Nina Jankowicz has advised these governments on the front lines of the information war. The lessons she learnt from that fight, and from her attempts to get US congress to act, make for essential reading.

I live in Melbourne, Australia. I like anarchy. I don't like nazis. I enjoy eating pizza and drinking beer. I barrack for the greatest football team on Earth: Collingwood Magpies. The 2021 premiership's a cakewalk for the good old Collingwood.
View all posts by @ndy →
This entry was posted in Anti-fascism, History, Media, State / Politics, That's Capitalism!, War on Terror and tagged 3CR, How To Lose The Information War, Nina Jankowicz, Yeah Nah Pasaran. Bookmark the permalink.