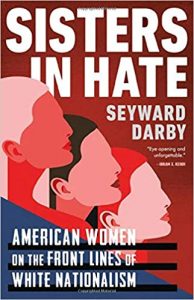 On this week’s episode of Yeah Nah, we talk to Seyward Darby [Twitter], a writer and editor who’s just recently had published Sisters in Hate: American Women on the Front Lines of White Nationalism (Little, Brown & Co., 2020):

Journalist Seyward Darby’s “masterfully reported and incisive” (Nell Irvin Painter) exposé pulls back the curtain on modern racial and political extremism in America telling the “eye-opening and unforgettable” (Ibram X. Kendi) account of three women immersed in the white nationalist movement.After the election of Donald J. Trump, journalist Seyward Darby went looking for the women of the so-called “alt-right” — really just white nationalism with a new label. The mainstream media depicted the alt-right as a bastion of angry white men, but was it? As women headlined resistance to the Trump administration’s bigotry and sexism, most notably at the Women’s Marches, Darby wanted to know why others were joining a movement espousing racism and anti-feminism. Who were these women, and what did their activism reveal about America’s past, present, and future?

The three case studies in the book are of Corinna Olsen, Ayla ‘Wife With A Purpose’ Stewart and Lana Lokteff. You can read reviews of Seyward’s book (it’s highly-recommended) via her website, but as an aside: in the chapter on Olsen, reference is made to the shooting of Luke Querner in Portland in March 2010, an incident which I’d forgotten until prompted; late last year, Wife With A Purpose seems to have abandoned her propaganda; local nazi Blair Cottrell was a guest on Lokteff’s show (deleted from Facebook and YouTube, but still supported by Twitter) back in September 2017.

*Please note that the podcats version of this episode contains a slightly longer discussion with Seyward.*

I live in Melbourne, Australia. I like anarchy. I don't like nazis. I enjoy eating pizza and drinking beer. I barrack for the greatest football team on Earth: Collingwood Magpies. The 2021 premiership's a cakewalk for the good old Collingwood.
View all posts by @ndy →
This entry was posted in Anti-fascism, History, Media, Sex & Sexuality, State / Politics, That's Capitalism!, War on Terror and tagged 3CR, Ayla Stewart, Corinna Olsen, Lana Lokteff, Seyward Darby, Sisters in Hate, Sisters in Hate: American Women on the Front Lines of White Nationalism, Wife With A Purpose, Yeah Nah Pasaran. Bookmark the permalink.