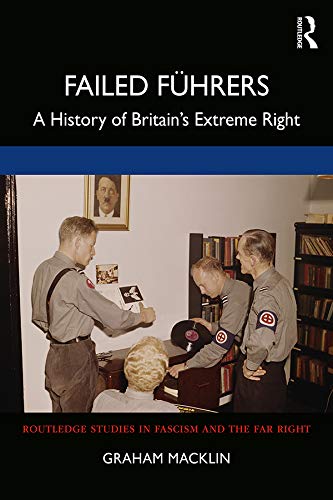 On this week’s episode of Yeah Nah, we talk to Graham Macklin [Twitter]. Graham is an historian at the Center for Research on Extremism (C-REX): The Extreme Right, Hate Crime, and Political Violence at the University of Oslo. He also co-edits Routledge’s Fascism & Far Right Book Series and the journals Patterns of Prejudice and Fascism: Journal of Comparative Fascist Studies.

provides a comprehensive history of the ideas and ideologues associated with the racial fascist tradition in Britain. It charts the evolution of the British extreme right from its post-war genesis after 1918 to its present-day incarnations, and details the ideological and strategic evolution of British fascism through the prism of its principal leaders and the movements with which they were associated.

Taking a collective biographical approach, the book focuses on the political careers of six principal ideologues and leaders, Arnold Leese (1878–1956); Sir Oswald Mosley (1896–1980); A.K. Chesterton (1899–1973); Colin Jordan (1923–2009); John Tyndall (1934–2005); and Nick Griffin (1959–), in order to study the evolution of the racial ideology of British fascism, from overtly biological conceptions of ‘white supremacy’ through ‘racial nationalism’ and latterly to ‘cultural’ arguments regarding ‘ethno-nationalism’.

Drawing on extensive archival research and often obscure primary texts and propaganda as well as the official records of the British government and its security services, this is the definitive historical account of Britain’s extreme right and will be essential reading for all students and scholars of race relations, extremism and fascism.

Oh yeah. YUGE shout-out to Alexander Rud Mills (AKA ‘Tasman Forth’: 1885–1964), the local fella who not only interviewed Adolf Hitler in 1932 but also introduced Odinism to Britain’s leading Nazi camel doctor — and founder of the Imperial Fascist League — Arnold Leese:

This increasing attempt to historicise Nazism and emphasise its ‘British’ roots was also reflected in Leese’s growing interest in racialised paganism. He had cultivated such ideas through contact with Melbourne solicitor Alexander Rud Mills, an early evangelist for a racialised variant of Odinism, the spiritual backbone of a revitalised ‘British race’.

I live in Melbourne, Australia. I like anarchy. I don't like nazis. I enjoy eating pizza and drinking beer. I barrack for the greatest football team on Earth: Collingwood Magpies. The 2021 premiership's a cakewalk for the good old Collingwood.
View all posts by @ndy →
This entry was posted in Anti-fascism, Broken Windows, Death, History, State / Politics, That's Capitalism!, War on Terror and tagged 3CR, Failed Führers, Failed Führers: A History of Britain's Extreme Right, Graham D. Macklin, Graham Macklin, Yeah Nah Pasaran. Bookmark the permalink.