Following hot on the heels of public revelations regarding the operations of ‘The Base’ in Australia, the ‘National Socialist Network’ has been experiencing some legal difficulties of late. Hence:

The raids in Adelaide were preceded by searches of the Melbourne residence of NSN fuehrer Tom Sewell, which followed an alleged assault upon a Channel 9 security guard in March. Word on the virtual street is that further raids on the Queensland branch of the NSN, and presumably elsewhere, may also be taking place …

Precisely why authorities have chosen this particular moment to conduct the raids is of course unknown, though I suspect that, apart from anything else, recent NSN propaganda making ~jks~ about raping Jewish women may have something to do with it. In any case, police action has placed additional pressure upon Sewell to remain staunch, and thus revealed one of the faultlines that’s run through this iteration of the neo-Nazi milieu since it (re-)emerged in 2015 as the ‘United Patriots Front’ (UPF).

In 2015, the UPF was able to position itself as the energetic vanguard of ‘Reclaim Australia’, a smol Islamophobic, xenophobic and proto-fascist movement which attracted the enthusiastic participation of several thousand Ordinary Mum & Dad™ bigots, but which otherwise reflected fairly mainstream reactionary politics (of the sort Sky News Australia routinely celebrates). At that time it was widely understood by its neo-Nazi leadership that it was unwise for the UPF to reveal its power lvl, though Andy Fleming argued Don’t get sucked in by the hijinks of far-right activists: active neo-Nazis are welcome and hold leadership positions in a movement gaining in appeal. Six years later, following the collapse of the UPF (2015–2017), the rise and fall of its successor organisation ‘The Lads Society’ and, more recently, the emergence of the NSN, such pretences have largely been cast aside, the masks removed, and the worship of Adolf Hitler openly resumed.

This fact is, perhaps, one of the keys to the success of the NSN, and certainly explains its appeal to the international neo-Nazi movement, who thrill to the prospect of something similar to, say, the ‘Nordic Resistance Movement’ developing Down Under. At the same time, the NSN is subject to criticism by persons otherwise derided as ‘optics cucks’, ie, those who are too weak or timid to openly proclaim their neo-Nazism. In the context of the UPF, it’s therefore ironic that former UPF leader Blair Cottrell — who went to jail after angrily claiming to have been an IRL cuck — is now being vigorously denounced by his former sidekick, Tom Sewell, for yet again allowing himself to be cucked by (((media))) and (((politics))), and thus failing to express solidarity with his fellow neo-Nazis. 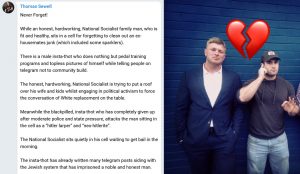 I live in Melbourne, Australia. I like anarchy. I don't like nazis. I enjoy eating pizza and drinking beer. I barrack for the greatest football team on Earth: Collingwood Magpies. The 2021 premiership's a cakewalk for the good old Collingwood.
View all posts by @ndy →
This entry was posted in Anti-fascism, Media, State / Politics, War on Terror and tagged Blair Cottrell, Lads Society, National Socialist Network, neo-Nazi, neo-Nazism, The Lads Society, Thomas Sewell, Tom Sewell, United Patriots Front. Bookmark the permalink.