3CR’s annual radiothon ends this week, but you can still help us help community radio by donating via Give Now. Many heartfelt thanks to all who’ve donated to YNP! and to all the other neat0 programs. 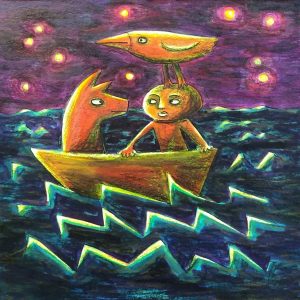 Above : ‘At The Mercy Of This Journey’ via Stephanie McMillan

On this week’s episode of Yeah Nah Pasaran! on 3CR we talk to Heron Greenesmith [Twitter]. Heron is currently monitoring anti-LGBTQI rhetoric as a Senior Research Analyst at Political Research Associates and teaching Queerness and the Law as an adjunct Professor at Boston University School of Law. We spoke to Heron about recent, increasingly violent campaigns against transgender people in the United States, the role of the Christian right in supporting those campaigns, dis- and mis-information, Roe v Wade and more.

I live in Melbourne, Australia. I like anarchy. I don't like nazis. I enjoy eating pizza and drinking beer. I barrack for the greatest football team on Earth: Collingwood Magpies. The 2023 premiership's a cakewalk for the good old Collingwood.
View all posts by @ndy →
This entry was posted in Anti-fascism, History, Sex & Sexuality, State / Politics, That's Capitalism! and tagged 3CR, Heron Greenesmith, Yeah Nah Pasaran. Bookmark the permalink.