***Thank you to every body who contributed to the 3CR Radiothon*** 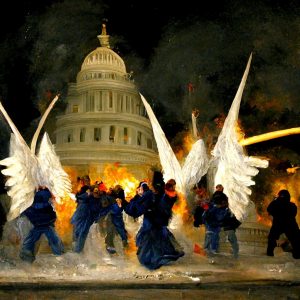 On this week’s episode of Yeah Nah Pasaran! on 3CR we talk to Katherine Stewart [Twitter]. Katherine is a journalist and the author of The Power Worshippers: Inside the Dangerous Rise of Religious Nationalism (Bloomsbury, 2020):

For too long the Religious Right has masqueraded as a social movement preoccupied with a number of cultural issues, such as abortion and same-sex marriage. In her deeply reported investigation, Katherine Stewart reveals a disturbing truth: this is a political movement that seeks to gain power and to impose its vision on all of society. America’s religious nationalists aren’t just fighting a culture war, they are waging a political war on the norms and institutions of American democracy.

Katherine also recently penned ‘Christian Nationalists Are Excited About What Comes Next’ for The New York Times (July 5, 2022): The shape of the Christian nationalist movement in the post-Roe future is coming into view, and it should terrify anyone concerned for the future of constitutional democracy.

I live in Melbourne, Australia. I like anarchy. I don't like nazis. I enjoy eating pizza and drinking beer. I barrack for the greatest football team on Earth: Collingwood Magpies. The 2021 premiership's a cakewalk for the good old Collingwood.
View all posts by @ndy →
This entry was posted in !nataS, Anti-fascism, Death, History, Media, Sex & Sexuality, State / Politics, Television, That's Capitalism!, War on Terror and tagged 3CR, Katherine Stewart, The Power Worshippers, The Power Worshippers: Inside the Dangerous Rise of Religious Nationalism, Yeah Nah Pasaran. Bookmark the permalink.