On a vaguely related note… in 1991, Bob Mould toured Melbourne (as an acoustic solo act), and I was so impressed, I bought a tour poster. And I dunno why, but soon after I put it up on my bedroom wall, Mum saw it, and she asked me: ‘Andrew, is that man gay?’ 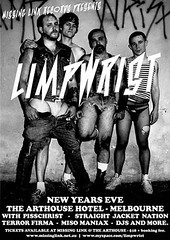 I live in Melbourne, Australia. I like anarchy. I don't like nazis. I enjoy eating pizza and drinking beer. I barrack for the greatest football team on Earth: Collingwood Magpies. The 2023 premiership's a cakewalk for the good old Collingwood.
View all posts by @ndy →
This entry was posted in Music. Bookmark the permalink.