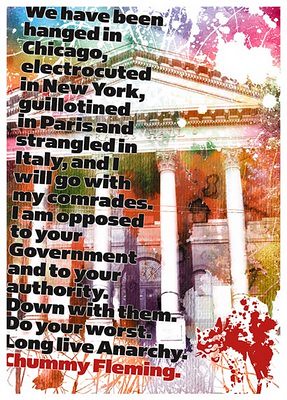 Most of the time, in a wowserish city in which most amusements closed on Sundays, the Yarra Bank simply provided a form of free entertainment. For those interested in ideas, though, the forum offered what Labor Prime Minister John Curtin (himself no slouch on the stump) rightly described as Melbourne’s ‘university of the working class’.

At Anarchist U, it’s all about structure
Bert Archer
The Globe & Mail
January 6, 2007

As the kids go back to school and the rest of us try to figure out how to make ourselves better people in the new year, thoughts often turn to taking some kind of course… A quick Google jog tells us we could learn [lots of stuff what costs $; especially if, like me, you have to fly to Canada first].

Or we could study Latin American Politics for free at Anarchist U.

About 60 people signed up for the three courses offered by Anarchist Free University this term (the other two are Questioning Masculinity and Politics of Addiction). But the mere fact that it’s entering its fourth year without an address or a registrar, and with total operating expenses of about $50 a year (most of which is the fee for hosting its website), is something of a milestone.

[It also evokes Michel Onfray‘s Université populaire de Caen, (2002); which in turn echoes the experience of the popular universities of the late nineteenth and early twentieth centuries.]

Much of the original plan — an orientation picnic, an end-of-term party, even a discussion of handing out certificates — has fallen away in the years since its creation in the summer of 2004.

However, the school’s basic principle, which Alan O’Connor describes as giving “people the intellectual and social experience of university for those who either couldn’t afford to go or didn’t want to go,” is what current organizer Erik Stewart, a.k.a. “Possum,” figures has kept the school going.

“It offers community,” Mr. Stewart says. “It’s a tight-knit group in some ways. Everyone’s welcome, but people usually end up being part of the community, running courses, or running the school in general.”

Since it uses only volunteer labour and donated spaces and often gets even its photocopying free (from donors like the Ontario Public Interest Research Group), there is no need for funding and therefore no worries about funding running out. Another recent experiment in free education, the Free School in Kensington Market, collapsed when a two-year donation of a storefront space expired.

What may ultimately be the secret of Anarchist U’s modest success is that, despite its name, it has a degree of structure not often found in these sorts of community-based alternative education models.

“We’re not an anarchist university in the way that The Marxist Institute [now defunct?] teaches Marxism; we were not trying to teach anarchism,” says Dr. O’Connor, a Trent University professor who left Anarchist U shortly after its birth to write a book on punk record labels. “We were organized on anarchist principles” — consensus decision-making, decentralized organizing and a non-hierarchical structure in classes and meetings, according to the school’s website.

[O’Connor is also the author of an interesting article, ‘Punk Subculture in Mexico and the Anti-globalization Movement: A Report from the Front’, New Political Science, Vol.25, No.1, 2003. In a textbook example of the problems associated with the commodification of knowledge, however, to gain access to the online version you must either be an enrolled student at a University or, as an individual citizen, pay $ to informa… Of course, if you wrote Alan directly, he’d probably email you a copy! Preferably while listening to Los Crudos… even if they’re on fucking myspace… and not Mexican… Y la juventud es una amenaza / porque atraves de sus venas corre la sange de rebellion.]

“Our classes have a fair amount of structured content,” Mr. Stewart says. “This tends to give a higher quality of experience in that it forces the facilitator to seriously consider precisely what they’re teaching, it gives people at an Anarchist U meeting the chance to review and make suggestions, and it allows people coming to the class to know what they are going to learn.”

Accompanying that structure is the dismantling of the traditional relationship between teacher and student.

“There’s less of an idea that one person is an expert and other people are there to have their empty heads filled with the boundless knowledge of one expert,” says Jason Dippel, who has taken seven courses with Anarchist U (including the The Psychedelic Century and Radical Perspectives on Media[?]), and this term is teaching Questioning Masculinity at Bike Pirates, a communal bicycle-repair space on Bathurst Street.

His course features texts by people like transsexual theorist Kate Bornstein and Brown University gender scholar Anne Fausto-Sterling that would not look out of place on a graduate school curriculum. Mr. Dippel himself has a BA in history and is a volunteer with the Ontario Coalition Against Poverty. His last job was as a dishwasher.

Andrew Pinto, who will be teaching the course on Latin America starting Wednesday in a Cabbagetown community centre, shares Mr. Dippel’s passion for education and left-leaning political awareness. He is a recent U of T medical school graduate whose knowledge of his subject is entirely extracurricular, though his co-teacher, [K]ris Orantes, is from Guatemala.

“The main thing that attracted me to it was the idea of free education,” Dr. Pinto says, adding that most of his fellow med-school students graduated with as much as $100,000 in debt.

“We’ve lost the idea of education being accessible.”

Anarchy is Order. Government is Chaos.

Anarchist movements — whether in Canada or Cataluña, the twenty-first century or the nineteenth — have always placed a great deal of emphasis on education. Kai Malloy writes that:

Between the 1820s and the end of the 1900s hundreds of men and women on both the North American and European continents, as well as parts of Asia, developed an amazing set of pedagogical theories and ideas that can be called “libertarian” in their form and content… Among the contributors to such endeavors have been many famous figures from the radical and artistic world, including Robert Owen, Henry David Thoreau, Ralph Waldo Emerson, Bronson Alcott, Josiah Warren, Benjamin Tucker, Rudolf Rocker, Voltairine de Cleyre, Emma Goldman, Alexander Berkman, Margaret Sanger, Carlo Tresca, Walt Whitman, Eugene O’Neill, Upton Sinclair, Robert Minor, Robert Henri, George Bellows, Man Ray, Rockwell Kent. Their object during times of war and peace, social unrest and stability, government repression and pardon, and economic depression and progress, has been to create not only new types of schools, but also new cultural forms, new lives, and ultimately, a new social order.

— ‘Toward a Historical Perspective of Libertarian and Anarchist Education in the United States’, Harbinger, Vol.2, No.1

A tall order, yes, but as Ken Knabb has observed:

What is needed, I believe, is a worldwide participatory-democracy revolution that would abolish both capitalism and the state. This is admittedly a big order, but I’m afraid that nothing less can get to the root of our problems. It may seem absurd to talk about revolution; but all the alternatives assume the continuation of the present system, which is even more absurd.

Unfortunately, in Australia, many of the institutions established by the working class in the late nineteenth century in order to provide workers with an independent education have been reabsorbed by the state: either directly, or through the determined efforts of ‘social democrats’ to bring autonomous expressions of radical working class culture under the control of the ALP (the party). Still:

The difficulties which confronted working-class readers made the discovery of that ‘truly worthwhile book’ all the more rewarding. Chummy Fleming, a Melbourne bootmaker, is a vivid example [and a deadset anarchist… to boot!]. His father an Irish weaver, his mother a factory hand, Fleming had a scant and indifferent schooling. At the age of 10 he was sent to work in a boot factory; there a 14-hour day left little time for reading. Only when he was ‘laid up with sickness’, ‘broken by confinement and toil’, did Fleming begin to wonder at the world around him. ‘It was like a flash of light’, he remembered, ‘one summer’s morning’ when he began his reading. [William] Lane used the same image to describe his ‘discovery’ of Byron and Shelley.

These and a few other radical books . . . [kept me] in touch with the growing progressive thought that was emerging from the long dark night of ignorance and despair. Thus did I, like many others, find the light and embark upon a life long [sic] crusade against the capitalist exploiter.

For the working-class autodidact, books were [and remain] much more than a source of ‘joy and enlightenment’. With romantic poets, dead for over half a century, Lane developed an intensely personal relationship. ‘Throughout my life’, he declared, ‘Shelley has been with me, not only as a great revolutionary . . . but as a dearest friend and comrade.’ In books were ‘a source of inspiration that has never deserted me’. Through reading, Lane ‘felt comradeship with all the great ones of the earth’ . . .

— Bruce Scates, “Knowledge is Power”: Radical Literary Culture and the Experience of Reading, paper presented to the Second History of the Book in Australia (HOBA) Conference, State Library of NSW, 10-11 August 1996

I live in Melbourne, Australia. I like anarchy. I don't like nazis. I enjoy eating pizza and drinking beer. I barrack for the greatest football team on Earth: Collingwood Magpies. The 2021 premiership's a cakewalk for the good old Collingwood.
View all posts by @ndy →
This entry was posted in Anarchism, History, Student movement. Bookmark the permalink.

3 Responses to Anarchist U!