What are you, Deaf or something?

On Leftwrites, Jeff Sparrow has drawn my attention to an article by Lennard J. Davis, ‘Deafness and the Riddle of Identity’ (The Chronicle Review, January 12, 2007). It raises a number of interesting questions (see below) in relation to notions of identity, community, and (dis)ability; questions made all the more poignant by the recent production of a film, Welcome 2 My Deaf World, (nominated for an AFI Award in 2006 for Best Documentary) which chronicles the lives and experiences of two local deaf youths. (The film had its world premiere at ACMI in February 2006 — G’day James and Jen! — and screened on SBS in September; read Larissa Dubecki’s review.)

Bethany Rose and Scott Masterson are schoolmates, a pair of energetic and charming teenagers who share three things – adolescence, school, and deafness. We (the hearing) might see deafness as a disability to be cured. But to Bethany and Scott, their deaf world is a rich culture of human possibility, with its own language, rules, challenges and inspirations. Welcome 2 My Deaf World follows Bethany and Scott through the last few months of their schooling at the Victorian College for the Deaf (VCD), Australia’s first school [1860] for deaf kids, and now the only school that teaches in sign language from Prep to Year 12. With dreams of creative, sporting and academic success, both teenagers appear eager to move beyond their sheltered lives and enter the wider world. This documentary follows two teenagers on the edge of change, but it is also a story about what it means to be deaf in contemporary Australia. It is an exploration of a culture with its own language and history.

In reflecting on the making of the film (Paul Kalina, Listening in on the lives of deaf teens, The Age, September 7, 2006) the director, Helen Gaynor, says:

…she had never met a deaf person before making the documentary. The experience has prompted her to reassess how members of any mainstream group try, and often fail, to understand those who don’t belong to that group.

“I was shocked at how ignorant I was, and still am, about so-called disabilities. I was shocked at how little I knew about people who are considered disabled by mainstream Melburnians. I think what we can learn is that you need to tread very carefully when you’re interacting with people who come from a background that’s different from your own in terms of assuming that you understand their experience of the world.”

Deafness and the Riddle of Identity

Davis commences his essay by referring to recent (successful) student demonstrations at Gallaudet University — a ‘liberal’ arts university for the deaf and hard of hearing in Washington — regarding the unpopular choice of Jane K. Fernandes as President. As a result of their efforts — which culminated in the shutdown of the University, and which Davis writes “evoked in many people’s minds the student revolution of the 60s” — Fernandes was eventually given the arse (while students who participated in the protests face disciplinary actions on the part of University authorities, natch).

One of the issues Davis identifies in relation to the protest is the question of what actually constitutes a ‘deaf identity’; while Fernandes was criticised for a range of alleged failures, not being ‘deaf enough’ was, arguably, one of them.* As such:

…it might be useful to examine what deaf identity might be and how that identity fits in with current notions of other identities based on race, gender, sexual orientation, and so on. Even with all the recent hoopla about deaf issues, most people probably aren’t paying a lot of attention to what goes on within the deaf community. But the discussions there can point the way to a new and better understanding of identity in our postmodern world.

Davis then proceeds to explain the manner in which the deaf — based on a) the establishment of sign as a “genuine language” in the late 1950s and early 60s, and b) the adoption by some deaf of an activist model of community life (drawing on the legacy of the US civil rights movement) — came to constitute a distinct community (and culture). As a result of these and related developments:

The definition of the deaf as a colonized, ethnic, linguistic minority has in turn been widely accepted in deaf circles and taught for more than a decade in deaf-studies programs and at institutions like Gallaudet and the National Technical Institute for the Deaf.

He further argues that it was this conception, and its related practices — as embodied in institutions such as Gallaudet — that deaf students were defending. And while the existence of such a community brings advantages, it also brings problems: this “minority model of deaf identity is too crude, too rigid, too limiting”; it requires policing, and can lend itself to exclusionary politics and practices. Thus:

If deaf people are defined as only those who are native users of ASL [or its equivalents], you have to define all nonusers of ASL as “other”. That excludes, or at least marginalizes, deaf people who are orally trained… [those who] have cochlear implants; or never had the chance to learn sign language… [and other ‘others’, which in the end] brings us back to some notion of deafness as a biological impairment.

So much for the ‘linguistic model’ (language-centred conception) of deaf identity; but the ‘ethnic model’ (kinship) too, has problems: “In this ethnic-group model, just as in the linguistic model, there is an in-group and an out-group”, and a hierarchy of deafness is established. “Those most ‘in’ are deaf-on-deaf people, that very small percentage (perhaps only 5 percent of all those born deaf) who come from a deaf family, that is, whose parents were born deaf.” The existence of modern, digital communications technology also complicates matters, effacing the divide between the deaf and the non-deaf;** so too, the absence or presence of stereotypical modes of behaviour associated with ‘being deaf’, and the incommensurability of the notion of being deaf as constituting an ethnic group in the absence of an ethnos:

…an ethnos, a people, is the idea of an extended kinship system. People within an ethnic group are related not only by language, history, and culture, but also by a family structure that passes along a genetic inheritance. But the vast majority of deaf people do not come from deaf families.

After noting some of the other, more properly ‘political’ problems with the ethnic model of deaf identity (ones revolving around the law and strategies for securing rights), Davis, appropriately enough, welcomes us to the concept of deaf identity in relation to the existence of a deaf world or culture; however the “problem with [such] terms is that they are too general and too elastic”.

So, where does all this leave us? In conclusion, Davis writes:

I am arguing that defining the deaf or any other social group in terms of ethnicity, minority status, and nationhood (including “deaf world” and “deaf culture”) is outdated, outmoded, imprecise, and strategically risky. We would be better off expanding our current notions of identity by being less Procrustean and more flexible. Rather than trying to force the foot into a glass slipper, why not make a variety of new shoes that actually fit?

In that scenario, for example, people who are “one generation thick” could find commonality. So people with disabilities, deaf people, gay people, and children of deaf adults could say: We represent one potential way out of the dead end of identity politics. We are social groups that are not defined solely by bodily characteristics, genetic qualities, or inherited traits. We are not defined by a single linguistic practice. We need not be defined in advance by an oppressor. We choose to unite ourselves for new purposes. We are not an ethnic or minority group, but something new and different, emerging from the smoke of identity politics and rising like a phoenix of the postmodern age. 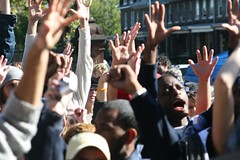 “What we are dealing with on campus is anarchy and terrorism.”

— Jane K. Fernandes in an email to the Gallaudet Board of Trustees, October 2006

In many ways, Davis’ essay is a rehearsal — a valuable one — of several decades of debate regarding the nature of identity; one informed by post-modernist insights, but one taking place on the somewhat unusual stage of contemporary debates in relation to deaf identity and deaf politics. And, in some ways, he ends at the same point at which he starts: inconclusively. Nevertheless, I think that the suggestion that who ‘we’ are is a reflection or a product of the way/s in which “we choose to unite ourselves for new purposes” is a highly productive means by which to examine identity. The political implications of such a perspective are also obviously the subject of much debate, but from my own, broadly anarchist perspective, I think that it points to the centrality of social struggle to the establishment of not only identity — conceived of as being centred on the individual subject — but, moreover, the communities which you-and-I inhabit and, through our individual and collective efforts, attempt to transform according to our perceived needs and desires.

For example, the struggle of students at Gallaudet regarding who is to assume the position of President at their University I find to be an inspirational one, not only because of the degree of political militancy and consciousness it expresses — a factor which hearing students, including those in Australia, could actually learn from, should they choose to open their hearts and minds — but also the manner in which it raises vital questions of democracy and political representation. In that sense, questions regarding who is ‘deaf’ and who is not, who is ‘in’ and who is ‘out’, are ‘political’ not only in the sense that they revolve around ‘identity’ but, moreover, in the sense that they raise questions regarding the political terrain on which they take place: broadly speaking, terrain we might refer to as ‘the commons’:

The commons are the universal heritage of people and all living things. They are everything needed to support healthy life on earth: air, water, food, shelter, health care, energy sources, and our genes. They are what is needed to sustain culture: our multicultural heritages, education, information and the means to disseminate it, essential human services, public spaces, and political space. They are equally the land, its forests, the oceans, and all ecosystems. In sum, the commons are everything that we inherit jointly and freely, and hold in trust for future generations.

And I raise my hands in support.

* Fernandes, according to Davis, learned to sign later in life, and is a user of (American) Pidgin Signed English; a rough equivalent to speaking the English language, but with a thick or heavy accent (think Borat).

** “Further complicating definitions of deafness are all things digital. Deafness ‘disappears’ in cyberspace. While using the Internet or pagers, for example, deaf people do not use language much differently from anyone else. In the blogosphere, we are all bloggers, whether we are deaf or not.”

See also : DEAF IN THE CITY (Joseph Rainmound) on the Gallaudet protest | Deaf Blogs (Australia) | Rants Of A SlakBasterd [!] | Sound and Fury: 2001 US film by Joseph Aronson exploring the controversy surrounding cochlear implants: “Cochlear implants may provide easier access to the hearing world, but what do the devices mean for a person’s sense of identity with deaf culture?”

I live in Melbourne, Australia. I like anarchy. I don't like nazis. I enjoy eating pizza and drinking beer. I barrack for the greatest football team on Earth: Collingwood Magpies. The 2020 premiership's a cakewalk for the good old Collingwood.
View all posts by @ndy →
This entry was posted in Film, State / Politics, Student movement, Television. Bookmark the permalink.

13 Responses to What are you, Deaf or something?