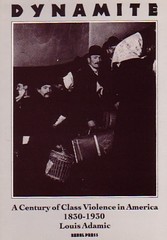 The struggle of the have-nots against the haves in the United States was first referred to as ‘class war’ in New York City by Frances Wright, “that bold blasphemer and voluptuous preacher of licentiousness”, as a conservative writer of that day called her; but at that time, and for some while afterward, the war was merely verbal. The fiery Fanny, with other reformers and uplifters then haranguing the young republic, contented herself with fierce and frequent blasts of eloquence denouncing the social and economic evils of the period.

There were, in the first quarter of the 19th century, a few strikes for higher wages and for the recognition of worker organizations, such as they were. The walkouts usually involved a dozen or a score of people, but they were, without exception, tame, peaceful affairs. So far as any records tell us, not a fist was lifted in any of them; strikers, it appeared, got even with scabs by calling them ‘rats’ and other bad names. Strikes were considered ‘conspiracies’ or ‘malicious enterprises’, coming under the old common law of England against interference with trade which continued in force in the United States after the revolution; and, more often than not, strikers were straight away arrested and fined or jailed and replaced by unorganized workers.

But that was no serious matter to the strikers. The country was young and vast beyond conception, and one could move on and very likely better oneself. The frontier lured the adventurous who found themselves at odds with the new industrialism in the east. In the west, land was to be had for the asking, at no expense save that of a journey, a few implements, and a beast or two. There was no sense in fighting for a job. And if one wanted excitement, the wilderness was full of Indians still to be killed.

Toward the end of the 1830s, however, immigrants — for the most part Germans, the Irish and the Dutch — began coming to the land of promise in considerable numbers, and thenceforth incidents of working class violence were frequent.

Conditions in Europe at that time were bad, and rising American industrialists who found native workers too independent in regard to wages and working hours sent agents to Ireland and to the Continent to lure the poor to the United States with fantastic tales of mountains of gold and unbounded freedom and opportunities. The Voice of Industry, a leading union and reform paper of that day printed in Massachusetts, editorialized indignantly against the “importation of strikebreakers” and charged the employers with providing themselves “against walkouts by creating a numerous poor and dependent populace… whose abject condition in their own countries made them willing to work 14 and 16 hours a day for what capital sees fit to give them”.

This indignation was justified. The majority of immigrants then, as later, were unskilled or lowly peasants. American employers, with the development of machinery and ever greater specialization of tasks in the shops, could use them advantageously, paying them low wages and working them before sunrise till after dark, to no small detriment of the native mechanics. American workers naturally resented the presence of these low Europeans — ‘dung’, they called them. Some of the trade unions, which were then coming into existence in Pennsylvania, New York and the New England States, eyed them with deeper dislike than the employers who were directly responsible for this class of immigration.

Foreign workers were employed in large numbers in construction gangs upon canals in New Jersey, New York, Maryland, and Pennsylvania at from $5 to $12 a month… They worked, too, at slightly higher wages, on railroads under construction. Often, when some overseer absconded with their money, they lost even these meagre earnings, and in such cases they had no legal redress. The canals and railroads passed through marshy regions, and the workforce often died of malaria and other diseases. But contractors found no difficulty in replacing the sick and the dead, for nearly every ship that arrived from Europe brought in more ‘dung’.

During the second quarter of the 19th century frequent ‘riots’ occurred, as the press called the disturbances. Most of them were spontaneous, unorganized, leaderless strikes for higher wages and better working conditions by these wretched foreign workers who were driven to desperation. The militia was often called out to quell the outbursts; people were killed and property destroyed or damaged.

In most of the riots the Irish predominated. The Germans, the Dutch and other immigrants were comparatively patient sufferers.

In 1836, a gang of Irish dock workers in New York City rioted for higher wages and for their “impudent conduct”, as a local newspaper put it, the police distributed among them “some severe and probably dangerous wounds”.

The Irish also took part in the riot at Allegheny City in the summer of 1814. The Pennsylvania reformers had just succeeded in inducing the legislators of the State to pass an act limiting the working day to 10 hours and forbidding the employment of children under 12 years of age in cotton, woollen, silk, paper and flax mills. This had displeased the up-and-coming manufacturers of Allegheny City very much. They immediately laid off 2000 operatives, who, living from hand to mouth as they did, could not afford to be jobless. Within two weeks most of them starved, or were on the verge of starvation.

One day, in their desperation, several hundred men, women and children tried to return to work on the old 12 hour basis, or upon any terms whatever. Such was their eagerness to get back to their machines and benches that they attempted virtually to break into the mills. The armed guards repulsed them; but before they returned home, a riot occurred at one of the factories in which several people were injured and some property was damaged. About 20 arrests were made; 13 of the rioters — five of them Irish — were convicted and fined, but the majority, unable to pay the fines, went to prison. A few days after the riot a settlement was made on the new 10 hour basis with a 16% reduction in wages.

The high-toned New York Journal of Commerce referred to the riots as “an exotic phenomenon in this country which has been imported with the dregs and scum of the Old World that we so much covet” and the supercillious Pennsylvanian called the rioters “foolish and hot-headed foreigners”.

Such were the extremely mild beginnings of violence in the class struggle in the United States — mild as compared with the violence that flared up with great frequency in the later decades of the 19th and early in the 20th.

Ignorant immigrants were ‘dung’ and ‘dregs and scum’, and were treated accordingly. They spoke with a variety of tongues; there were other important racial differences among them; and even if native union leaders and reformers had had any sympathy with their lot, which they lacked completely, organization among them would have been impossible.

In consequence, hunger and general wretchedness drove them to sporadic impudent conduct, which the fully American citizens of that day were perhaps justified in characterizing as a foreign phenomenon in the sense that only — or largely — immigrants were guilty of it. But the conditions which provoked them to riots were quite American; it was the American industrialists who imported these foreigners and then treated them inhumanly.

I live in Melbourne, Australia. I like anarchy. I don't like nazis. I enjoy eating pizza and drinking beer. I barrack for the greatest football team on Earth: Collingwood Magpies. The 2020 premiership's a cakewalk for the good old Collingwood.
View all posts by @ndy →
This entry was posted in History, State / Politics. Bookmark the permalink.