Blockbuster Video: Wow! What a difference!

[Update : Hoon hunt targets ringleaders, Catherine McAloon, The Age, January 15, 2007: “Police say they are determined to catch 40 to 50 ringleaders of a violent rampage that followed an illegal burn-out meeting in Melbourne’s south-east early on Saturday… Detective Senior Constable Mark Robertson of Dandenong Criminal Investigation Unit (CIU) said the intensity of the violence was unprecedented [sic] in Melbourne. “The streets of Melbourne have just never seen anything quite as extensive as this. We’ve had the G20 issues and obviously the WEF (World Economic Forum) issues three or four [ie, seven] years ago, but as far as suburban violence is concerned, certainly to my knowledge this is the first that we’ve seen anything of this nature,” Detective Robertson said.” Peter Brown (councillor, Keysborough South ward, City of Greater Dandenong) has offered support to Mick Armstrong‘s theory regarding the completely foreign nature of the violence, speculating that the 40 or 50 babies in prams are from the Sudan. Or possibly New Zealand. Or England. Or Germany. Or Sweden. Certainly not Australia. And even then, probably from interstate. Or, at least, the north-western suburbs. Armstrong added that “Middle class students who attend The University of Melbourne should offer no comfort to these crazies. We should do whatever we can to isolate them. They are wreckers. If they grow in Australia it will simply make it harder to build a revolutionary organisation that can participate in mass struggles, draw lessons from past victories and defeats and convince the working class of the way forward to socialism. As well as illegally race cars.”] 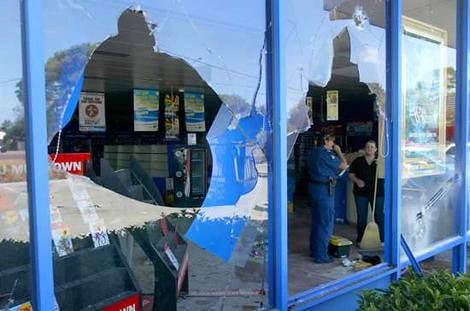 Inspired by the sight of G20 protesters racing cars in the CBD last November, yoof in Noble Park went on a wild rampage Friday night. Police believe that babies in prams acted as ringleaders in the orgy of violence, and Mick Armstrong‘s knee has issued a statement identifying the babies as being foreign in origin, part of an international ‘baby bloc’ that has caused mayhem in cities throughout Europe. Marxist University students — should they be aware of its existence — have been advised to steer well clear of the area, and medical authorities have issued health warnings advising the general public to report immediately to their local police station should they show any signs of the ‘hoon plague’.

Independent investigators have since confirmed the link between local hooligans and the filthy fucking foreigners, believed to have their secret headquarters, naturally enough, somewhere overseas. Other revolutionary socialist parties have speculated that the trigger for Friday night’s violence was the result of the fact that ‘Someone spray-painted graffiti on the basketball court wall in Noble Park [USA] on December 12 [2006]. The scrawlings read “CCUG”, “West Side 4 Life”, “DOPE!” and “Camo Classic Underground”.’ Counter-terrorism experts at the Australian Homeland Security Research Centre have also since confirmed that the likely motivation for the assault on Blockbuster was the company’s notorious decision in 1989 to refuse to stock Martin Scorsese’s award-winning film The Last Temptation of Christ, and have requested further Federal Government funding to explore the link between this decision and the riots in Seattle at the meeting of the World Economic Forum in 1998.

AUTHORITIES will launch a blitz against hoons in Noble Park in response to a night of violence and destruction.

About 50 police were undermanned and outgunned when they were attacked with bottles, rocks and flares in the outer southeastern suburb early [Saturday morning, January 13].

The officers had gone to the corner of Princes Highway and Elonera Rd where they tried to stop drag racers and move on a crowd of more than 1500 — some with babies in prams.

In the ensuing chaos, louts climbed traffic lights, rammed light poles and signposts, burned rubbish bins and went on a rampage that resulted in a video-rental shop being trashed and its products looted.

Chief Insp Graham warned that police would not hesitate to lock away cars.

Victoria Police sent urgent reinforcements, including the dog squad, in a bid to quell the violence about 1am at the local McDonald’s. Management locked staff inside until the mayhem subsided.

Gail Harbour, who has lived in Noble Park for 18 years, said the hoons were doing “doughnuts” in high-powered cars.

“There was smoke everywhere,” she said.

“Everyone was clapping, people standing on a bus shelter, then someone started throwing flares into a passing car and on to the shelter itself.”

Ms Harbour compared the scenes with the recent G20 riots in the CBD.

“There was nothing police could do about it, the police just sat in their cars with their windows up.”

I live in Melbourne, Australia. I like anarchy. I don't like nazis. I enjoy eating pizza and drinking beer. I barrack for the greatest football team on Earth: Collingwood Magpies. The 2020 premiership's a cakewalk for the good old Collingwood.
View all posts by @ndy →
This entry was posted in !nataS, State / Politics. Bookmark the permalink.

4 Responses to Blockbuster Video: Wow! What a difference!