As best I can figure, in Amsterdam on September 22 a rally was held by a Dutch neo-Nazi party called the NVB. It was rudely interrupted by a number of anti-fascists, drawn, I think, from the ranks of local krakers (squatters), Ajax (?) football hooligans, and others. I think the neo-Nazi rally may have had something to do with the proposed construction of a mosque… Note the presence of Fairuza Balk’s Dutch-speaking twin towards the end of the report.

UPDATE : A Dutch-speaking comrade has kindly provided an English translation and some further background to the demo in Amsterdam…

The NVB arranged to have a rally ostensibly in order to protest the construction of a mosque in Amsterdam but, moreover, the temporary removal, for a period during its construction, of a monument to Dutch people killed during WWII. (Ironically, the memorial is dedicated to preserving the memory of those died fighting against Nazism and the German occupation.) Members of the local Muslim community are apparently also unhappy at the presence of a cross in the vicinity of their mosque. In the event, the monument is scheduled to be removed for a period while construction takes place, and restored once it is finished. Local antifa maintain that the NVB rally was really intended to be a media stunt, and as a provocation towards the local, non-White community living in the Baarsjes.

Reporter: ”This is Suriname Square. We are here because the NVB is going to march against the replacement of a war monument so as to allow for the construction of the ‘Western Mosque’.”

W. Beaux, NVB: ”We are going to the spot where the cross is going to be taken away, to place a symbolic cross and to hold a speech.”

Reporter: ”At the same time a counter-demo is to take place, organised by the anti-racist committee ‘NVB Nee!’. Of course, this means trouble and indeed, the situation escalates. Squatters, F-side hooligans and locals attack the right-wing extremists.”

Angry Grrl: ”A boy is beaten up, he has dark skin. I jump in between them and what happens? The Nazis get away but I’m being beaten by the ME [riot police].”

D. Lange, committee NVB Nee!: ”I’m very pleased that their march has been cancelled and that they [the Nazis] were kept from going into ‘the Baarsjes.’* This is great.”

Reporter: “Aren’t you a supporter of non-violent resistance?”

W. Beaux: ”We have to end our demonstration and we’re going to do this in an orderly manner.”

* A multicultural neighbourhood in Amsterdam where the war monument is located (and will be relocated).

Below are the texts of two press releases found on Dutch IndyMedia:

START On Saturday September 22nd the NVB tried to protest in the Baarsjes in Amsterdam, without luck. Around 1.30 p.m. approximately 30 right-extremists who showed up for the march were escorted out of town in a bus by police. The reason was them using their flagpoles as weapons during a short confrontation with anti-fascists. The counter manifestation from NVB Nee! did take place. Last Saturday there was also a manifestation against the nazi demonstration from today. [There are video images of this manifestation in which locals speak out in support of the anti-fascists.] Five anti-fascists were arrested during the confrontation; a noisy demo in front of the police station turned into a sort of victory party at the same time. END

START The extreme right-wing NVB didn’t succeed in marching through Amsterdam today. Even before the 30 neo-Nazis started their march, they were held from marching by dozens of locals and antagonists. The police intervened almost immediately after the NVB protesters used their flagpoles as weapons and the march was prohibited. The extreme right-wing group mostly consisted of members of the highly violent international network Blood&Honour. It was clear to committee NVB Nee! that this group wasn’t planning on having a peaceful march, but wanted to provoke and create disorder in the neighbourhood ‘de Baarsjes’. Blood&Honour has been in the news more often this year because of racist violence and terrorist activities. The committee is very pleased that the march couldn’t take place. END

In the meantime, in Novi Sad, Serbia, members of neo-Nazi organisation Nacionalni Stroj (National Front) got themselves arrested at another rally, possibly for throwing things at some of the thousands (?) who rallied in opposition to them. The exact number of arrests varies from 20 (B92) to 30 (Reuters) to 26 (AP) to 56 (AP). The estimated number at and composition of the anti-fascist rally varies… In lieu of another 1,000 words, here’s a picture: 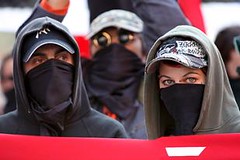