One-Nil by Mouth : Is it ever wrong to hit a bigot?
Steven Wells
Philadelphia Weekly
October 10, 2007

If you didn’t watch the semifinal of the women’s soccer World Cup between hot favorites the U.S. and plucky Third World underdogs Brazil, you don’t know dick about sports. Seriously, take a break now and go type “Marta” into YouTube and then come back.

See what I mean? On at least two occasions the 21-year-old striker Marta tore apart the U.S. defense with moves that seemed to defy physics. (For non-soccer heads, Michael Jordan might serve as a point of comparison. And that’s flattering the big guy.)

Another soccer player you might not have heard of is Eric Cantona, a brilliant French midfielder. Cantona’s defining moment came when he reacted to a fan shouting, “Fuck off back to France, you French motherfucker!” by attempting to drop-kick the swine in the chest and then punch his head off.

The media were outraged. “You would have thought that the pope had been gang-raped by aliens,” wrote [right-wing] libertarian soccer writer Duleep Allirajah [a/k/a Joe White; Duleep is one of the bizarros associated with the RCP/LM/spiked! online].

But when it turned out the abusive fan had attended neo-Nazi rallies and had been convicted of attacking a Sri Lankan-born immigrant with a 3-foot spanner, all right-thinking people applauded Cantona as an anti-racist hero.

“It’s very ironic that it took a white Frenchman to bring home to the nation the issue of racism in football,” said black British soccer player John Barnes.

And then in the 2006 World Cup final, French captain (and footballing genius) Zinedine Zidane, a child of North African immigrants, reacted to what was allegedly racist abuse from an Italian player [Marco Materazzi] by headbutting him. When Zidane arrived home he was met by thousands of fans who greeted him as a hero, chanting, “Zizou, Zizou!”

In light of all the cheeseparing piffle written about the Jena Six by liberal journalists apparently attempting to equate resistance to racism with the racism itself, I have to ask: Is it ever morally wrong to hit a racist?

If Jackie Robinson, during his first game with the Dodgers, had reacted to racist abuse by taking his bat and smacking some bigoted scumbag in the face, would that have made him the moral equivalent of the racist? Would it hell.

The legendary music journalist Lester Bangs once wrote about the casual racism of the mid-’70s New York punk scene. You guys have every right to go around spewing racism, he concluded, but no right to whine when some black guy walks up and smacks you in the mouth. 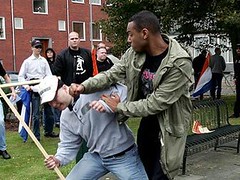 I live in Melbourne, Australia. I like anarchy. I don't like nazis. I enjoy eating pizza and drinking beer. I barrack for the greatest football team on Earth: Collingwood Magpies. The 2020 premiership's a cakewalk for the good old Collingwood.
View all posts by @ndy →
This entry was posted in !nataS, Anti-fascism, Collingwood. Bookmark the permalink.