Yeah, I know what you’re thinking. But No, that’s not Kevin Andrews, and ‘melton blood gang’ is not a new, ‘hip’ term for the Young Liberals — it’s a youth from Melton with a somewhat, ah, unusual interpretation of the area’s “unique and diverse mix of urban and rural lifestyle choices” providing a “vibrant, proud, growing and healthy community offering lifestyle choices”; in this case, being a violent racist psychotic (see Dan Oakes and Dewi Cooke, Community’s anger spills over, The Age, October 11, 2007). But speaking of violent racist psychotics…

Tomorrow, on Saturday October 13, Melbourne — not Melton — will be the location for a gathering of between 1-200 neo-Nazi skinheads, here to commemorate — as they do annually in this multicultural city — the death, in 1993, of the founder of one of the world’s leading international neo-Nazi networks: Blood & Honour. (The name, incidentally, is taken from the Hitler Youth, and their use of the motto “Blut und Ehre”.) Joining them in organising the knees-up are the Southern Cross Hammerskins, the local branch of another international neo-Nazi network, with a possibly even bloodier history than Blood & Honour, and which celebrated its twentieth anniversary last weekend in Portland, Oregon.

Unlike Melbourne, the corporate/state media in Portland managed to report the fact that a large neo-Nazi gathering was to take place in the city, reportage beginning some weeks before the event itself. Further, the corporate/state media also reported on its disruption, and the withdrawal of the use of the location for the celebrations by its owners, a local Elks club. By contrast, and despite some small degree of protest, the hosts of last year’s Ian Stuart Donaldson memorial gig — The Birmingham Hotel in Fitzroy — remains largely unaffected by its role in providing a venue for neo-Nazis; and even despite the fact that a local black woman was assaulted on the night of the gig, racially abused, and forced to call herself — not a ‘black dog’ or a ‘jigaboo’ — but a ‘black cunt’.

As for the gig itself, it will star four bands, and one surprise guest from overseas. The bands are:

1) FORTRESS : Fortress is a local band, for neo-Nazis the world over. Formed c.1991, and rarely performing after 1999, Fortress is easily Australia’s most significant and well-known contribution to the genre of neo-Nazi muzak otherwise known as RAC (’Rock Against Communism’), and the success of its peculiar brand of B-grade metal is largely a result of the efforts of one person: Scott McGuinness. Despite being based in Melbourne, it’s played very few gigs here during its lifetime, and attracted its largest audiences among neo-Nazis overseas, especially in Germany, where it played to crowds of thousands. The main drawcard for the event, tomorrow’s performance is allegedly the band’s last ever. Among the many songs celebrating Hitler, Nazism, white racial supremacy and the Holocaust, the band has written a tender-hearted tribute to Australia’s non-white residents, called ‘Parasites’:

Reject an alien government, don’t recognise their laws
It’s time to close the floodgates, it’s time to shut the door
Repatriate, ship ’em out, send the bastards back
If they don’t fucking like it, it’ll be in body bags

(NB. Rumours that McGuinness is one of the ‘very senior’ people Andrews relies on for advice regarding the inability of Africans to ‘integrate’ into Australian society is unconfirmed at this stage. You can sample some of Skrewdriver’s muzak on YouTube, where a local bonehead, James Newman — likely to be in attendance at Saturday’s event — has used one of their songs as a soundtrack to footage of the Cronulla pogrom in December, 2005. Fortress, on the other hand, sing the praises of dead loser Rudolf Hess here.)

2) QUICK AND THE DEAD : While Fortress may be Australia’s leading neo-Nazi export, Quick and the Dead was certainly the earliest. It’s reformed for this year’s ISD gig, but originally came together in Perth in 1981. Back then (and tomorrow also, presumably) it featured the now almost 50 year-old bass player Murray Holmes, a man who has the dubious distinction of actually having shared a stage, alongside another Aussie, Adam Douglas, with the Skrewydriver himself, Ian Stuart. In its heyday, the band was notorious for gathering together large numbers of racist skinheads — sometimes hundreds — and violently attacking others in Perth. They also helped to conduct violent campaigns against anti-racist activists. You can view an old (kinda funny) tabloid TV documentary on the band on YouTube.

3) BAIL UP! : Bail Up! is another local, Melbourne band, who most recently played a gig in July in Adelaide, also organised by B&H and the SCHS. Previously, it’s played a number of ISD memorial gigs (at The Birmy) as well as at other gigs alongside other bands, including local band Bulldog Spirit. Three years ago, the lead shouter, Damien Ovchynik, got his back in The Age, while attempting — successfully, if only for a brief time — to set a new World Record for the longest single tattooing session:

…Ovchynik, 25, is the ideal candidate to go the distance because he has an impressive threshold for pain – his ability to endure five hours of tattooing on his shinbone is the stuff of legend. Mr Ovchynik, whose body has 60 per cent tatt coverage, says people call him a freak because of his stoicism under the needle. His reward for this weekend’s session: portraits on his arms and legs of dead friends, and a Sydney streetscape. All Mr Ovchynik’s tattoos hold special meaning, so Prime Minister John HoWARd would gush with [white] pride if he knew Mr Ovchynik has the Australian flag on his leg, forever attesting to his allegiance…

Hurr hurr. Note that the tattooist, Greg “Beans” Hines, has his studio in Melton. Finally, here’s a photo of Damien, singing his heart out at the 2005 ISD memorial gig (also held at The Birmy): 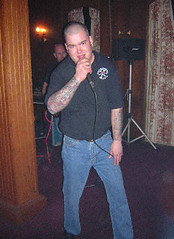 4) PARTS UNKNOWN, WEIGHT UNKNOWN : The organisers of this year’s gig have also promised that a prominent neo-Nazi band from the UK or the US will be playing, but haven’t announced any further details for fear that doing so might jeopardise their ability to play. In 2004, local neo-Nazis arranged for a band from Texas called the Bully Boys to play. A local enthusiast describes their performance as follows:

Next was the band that we had all been waiting to see and we weren’t disappointed!! The Bully Boys!! They played an awesome set, with tunes like Jigrun and Fire Up the Ovens. A few of the lads had gotten hold of some Jew’s yarmulke and took a light to it and handed it to Scott while he was singing Six Million More! Seeing that burn to the tune of that song was brilliant. What a showman!

In 1990, drummer Sean Tarrant was one of several Confederate Hammerskins sentenced to nearly 10 years in prison after pleading guilty to civil rights convictions for involvement in the vandalization of a mosque and a Jewish community center in Dallas, and chasing and assaulting minorities in a park. Their current lead vocalist, Scott, has also spent time in jail on assault charges.

Note that both Blood & Honour and the Hammerskins have a history of racist violence, including murder. And speaking of murder:

Neo-Nazis injured four and killed one person in Moscow on Saturday, according to an October 9, 2007 article in the national daily Komsomolskaya Pravda. The first victims were two Tajiks, whom police found bleeding on the ground and unconscious on Vostrykovsky Proezd. They were suffering from multiple stab wounds. One of the victims — 22 year old Ikhtier Istamzad — told police at the emergency room that seven men had attacked them.

Later that evening, a group of young men stabbed three Azeris in the same part of town; one of the victims died as a result. Police sources told the newspaper that the attack was recorded on video and that they believe the assailants were returning from a rock concert.

In the context of the recent murder of a Sudanese youth, Liep Gony, allegedly by two whitefellas from Adelaide, the racial assault on another Sudanese youth by other whitefellas, as well as the recent upsurge in anti-Semtic incidents in Melbourne, you’d think that a large gathering of neo-Nazi skinheads organised by two of the world’s leading international neo-Nazi networks would merit some further attention outside of this blog.