Free the Urewera 17 (We Can’t Be Beaten) 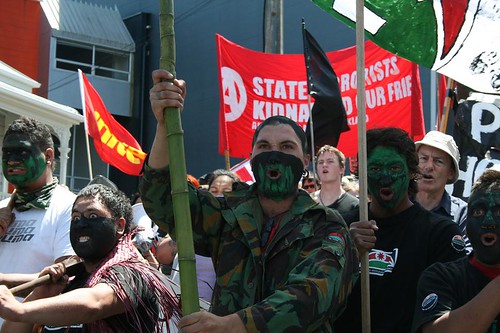 Above : Photo by John Squirrel of folks protesting in Auckland on the Global Day of Action, October 27, 2007. By the looks of ’em, they’re Not. Happy. Helen. (In the background is an @ banner reading ‘State terrorists kidnapped our friends’.)

Evidence about the operation leading up to this month’s police raids is now in the hands of the Solicitor-General for a decision on whether charges can proceed under the Terrorism Suppression Act. Seventeen people were arrested on October 15 following raids in Auckland, Wellington, Palmerston North, Hamilton, Christchurch, Whakatane and Ruatoki, 20km south of Whakatane. The raids were the culmination of a year-long investigation into weapons training camps alleged to have been held in the Urewera country and netted a haul of weapons. Among those arrested was Maori activist Tame Iti. Police deputy commissioner Rob Pope said police had reviewed the evidence collected over the course of the investigation. It has today been referred to the Solicitor-General for consideration whether consent will be given to charges under the Terrorism Suppression Act…

Some facts about the Terrorism Suppression Act 2002:

The law makes it a criminal offence to take part in, finance or recruit for a terrorist organisation or terrorist act;
Planning a terrorist act, or making a “credible threat”, is also illegal even if it is not carried out;
Unlike other countries the law does not give police additional powers of arrest or detainment;
The Attorney-General must give the green light to any prosecutions under the Act, but Michael Cullen has delegated this responsibility to Solicitor-General David Collins;
Under the Act groups can be listed as a designated terrorist entity, but so far no local groups have been designated. Those that have been listed are United Nations designated groups.

The troublemakers associated with Global Peace & Justice Auckland, in a shocking display of hatred for Big Brother, have issued a statement in response to the police referral, claiming it’s ‘politically-motivated’ — that is:

Behind this decision is the deeply political need to justify the huge extra resources and wide legislative powers the police and Security Intelligence Service have been given since 2001. They have to find terrorists. Uncovering criminal activity is not enough for these “wannabe terrorist fighters”.

What the police are now doing is charging political activists under a law which would have made many of the civil disobedience protests from 1981 into “terrorist activities”. Activities such as the 40 people sitting on Rotorua airport runway, the invasion of the pitch in Hamilton and the blocking of the Harbour Bridge could all qualify…

Of the 17, only six (by my count) have had their names publicly released by the courts, the sixth person — Marama Mayrick — having her name and person released on bail today. (The other five are Omar Hamed, Rongomai Bailey, Rawiri Iti, Jamie Lockett and Tame Iti. Bail granted and name suppression lifted for terror suspect, Radio New Zealand, October 29, 2007.)

I live in Melbourne, Australia. I like anarchy. I don't like nazis. I enjoy eating pizza and drinking beer. I barrack for the greatest football team on Earth: Collingwood Magpies. The 2020 premiership's a cakewalk for the good old Collingwood.
View all posts by @ndy →
This entry was posted in State / Politics, War on Terror. Bookmark the permalink.