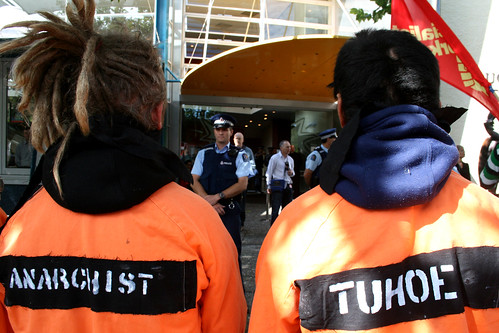 Image stolen. Part of an ace photo set by Simon Oosterman of the protest outside the “bourgeois workers’ party” conference last weekend…

Paul Buchanan has written some interesting words on the Urewera 16 (of which the latest update is below), arguing that “[t]o clarify the debate given continued evidence suppression and putting legal wrangles aside, the question as to whether at least twelve of the Urewera 17 [sic] were involved in a terrorist conspiracy reduces to four fundamental principles: capabilities, preparation, planning and targets in the construction of a terrorist plot. Beyond that, it is a matter of ideology and law,” before proceeding to provide an analysis of these “four fundamental principles” in the context of the case. He concludes that “What is of concern to civil libertarians is that the Terrorism Suppression Act is broad enough to construe terrorist intent even if the four elements of a terrorist conspiracy are virtually non-existent, and even if there is little ideological support for the cause being espoused. That would appear to be the situation of the Urewera [16]” (A Comment On Terrorist Conspiracy, November 5, 2007).

The decision on whether or not to acquiesce to police wishes and proceed with charges of terrorism against the 12 is currently being reviewed by the Solicitor-General. In another examination of the case, Nicky Hager explains the legal basis upon which David Collins will make his decision, and concludes that the most sensible course of action for Police to take is to prosecute the 12 under ‘ordinary’, criminal law rather than the ‘political’ Terrorism Suppression Act (How To Decide Who Is A Terrorist?, November 6, 2007).

Last weekend was the date of the annual New Zealand Labour Party conference, the 91st in its history. Aside from the usual back-slapping and horse-trading, the conference was accompanied by protest. According to Chris Trotter, the protest (which was conducted in a manner most irresponsible), was unfortunately able to distract media attention away from Helen Clark’s announcement regarding future cuts in personal tax rates — one of the dividends of eight years of fiscally-responsible Labour Party rule. “That the news media declined to make Clark’s tax message its lead story, preferring instead to keep the public’s focus on an inconsequential fracas between the far-left and centre-left, must have been extremely vexing to a Prime Minister with good news to tell” (Labour sings a fine tune but is it a swansong?, Independent Financial Review, November 7, 2007).

Not that that’s the oddest thing about Trotter’s article: he actually draws a comparison between the Attorney General’s address, praising the role of ‘social democracy’ in keeping Western Civilization from falling back into the primordial ooze, and Walter Benjamin’s ‘Theses on the Philosophy of History’ (1940).

Which is a bit of a stretch, really.

Nevertheless, this slightly bizarre rhetoric does serve to add an ‘intellectual’ gloss to the otherwise everyday machinations of power which, in the form of the NZ Labour Party — in addition to possible tax cuts — is also responsible for placing a dozen people behind bars. Further, on grounds that appear to be increasingly flimsy, and with regards a group of people who — contra Trotter — really only resemble the Weathermen, Baader-Meinhof / Red Army Faction or Symbionese Liberation Army for those with an overactive imagination. (And what are the Red Brigades Chris? Fegato tagliato?) Strangely, Trotter describes the “60 or 70” protesters at the conference as “anarchists and communists”, ignoring what appears to have been an independent Maori presence; inside the New Zealand Parliament, on the other hand, there was more batshittery when a Maori Party MP, Hone Harawira, was accused by a political opponent of being an ‘anarchist’ on the basis that he opposes the Terrorism Suppression Amendment Bill and expressed concern over recent police actions (Harawira accuses ‘state forces’ of terrorism, New Zealand Herald, November 7, 2007).

Bad enough to be Maori, but fuck me, an anarchist?

The Court Of Appeal has rejected an appeal against the lifting of name suppression for two more of the prisoners arrested in the October 15th raids.

Tuhoe Francis Lambert, 58, and Whiri Andrew Kemara, 38, both of Auckland, had had name suppression lifted by the Auckland District Court on Thursday November 1st, but their lawyers had immediately sought leave to appeal that decision and therefore interim suppression orders were granted until the appeal could be heard.

In total, 6 of the 16 arrestees have bail, with the other 10 remanded in custody at Auckland Central Remand Prison and Auckland Region Women’s Correctional Facility. Of the 16, only 4 still have name suppression. 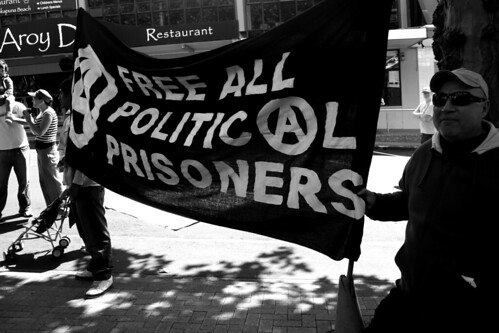 I live in Melbourne, Australia. I like anarchy. I don't like nazis. I enjoy eating pizza and drinking beer. I barrack for the greatest football team on Earth: Collingwood Magpies. The 2023 premiership's a cakewalk for the good old Collingwood.
View all posts by @ndy →
This entry was posted in !nataS, Anarchism, State / Politics, War on Terror. Bookmark the permalink.