Eastbourne couple Geoff and Gwyn Morphew don’t care if the Right-wing [sic] National Front and their mates are good, paying customers – they want them out of the Hutt Park Top 10 Holiday Park permanently.

The Morphews woke up yesterday to find their freshly painted front fence covered in swastikas and swear words, a rare sight in their quiet Lowry Bay neighbourhood.

The black scrawls were a shock, and the couple want to send photographs of them to the nearby Seaview holiday park, which has been the venue for the national “Flag Day” conference of Right-wing groups for the past four years. 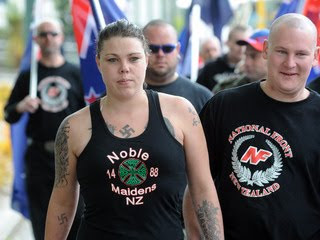 “I’m going to send them some photographs of this and say ‘don’t let them stay there again’,” Mr Morphew said. The couple said they had spoken to neighbours about the vandalism and none of them had heard of such a thing happening in their street before.

They had painted their fence just two months ago but now faced the task of removing black swastikas and obscene words from in front of their house.

On Saturday, about 30 National Front members and associates marched on Wellington to celebrate Flag Day.

Anti-fascist groups who had clashed with the Right-wingers [sic] in past years stayed away to avoid giving them more attention.

A spokesman from the Nationalist Alliance denied any involvement with the vandalism.

Holiday park staff would not comment on whether the Right-wingers [sic] would be welcome in the future.

I live in Melbourne, Australia. I like anarchy. I don't like nazis. I enjoy eating pizza and drinking beer. I barrack for the greatest football team on Earth: Collingwood Magpies. The 2021 premiership's a cakewalk for the good old Collingwood.
View all posts by @ndy →
This entry was posted in Anti-fascism and tagged Dr James Saleam, Hutt Park Top 10 Holiday Park, Kerry Bolton, Kyle Chapman, Nationalist Alliance, New Zealand National Front. Bookmark the permalink.