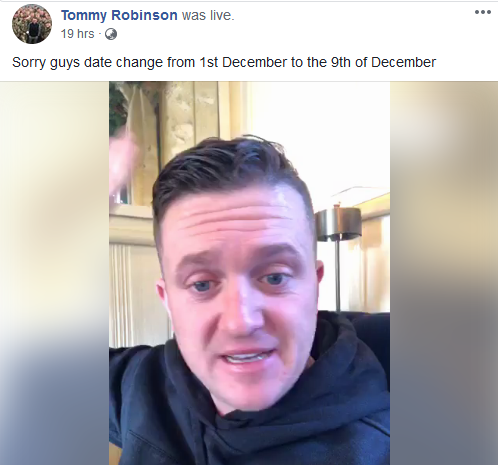 In the meantime, professional Pommy whinger Stephen Yaxley-Lennon has announced that he’ll be attending a pro-Brexit rally in London on December 9, slap-bang in the middle of his tour of The Colonies …

“We will kill you. That’s the Proud Boys in a nutshell.” “Can you call for violence generally? ‘Cause I am. Fighting solves everything. We need more violence from the Trump people. Get a fuckin’ gun. Get ready to blow someone’s fuckin’ head off.” ~ Gavin McInnes 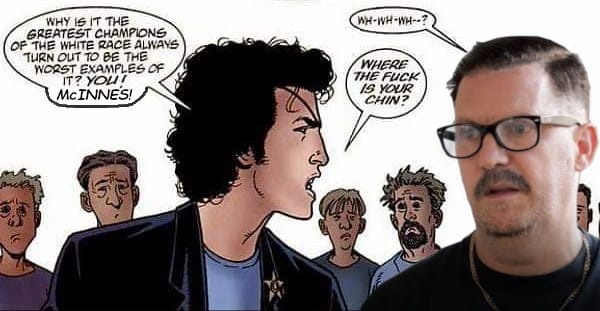 Mouthy little Pommy gobshite Stephen Yaxley-Lennon (AKA Tommy Robinson AKA Andrew McMaster AKA Paul Harris) and Proud Boys founder Gavin ‘Chinless’ McInnes are touring The Colonies next month. The tour kicks off in Adelaide in two weeks time, with the Melbourne leg a week later. While venues will not be announced until 24 hours prior to the two racist meatheads taking to the stage, previous venues are shown (below):

The tour is being organised by Damien Costas under the umbrella of Penthouse Australia.

Costas is a savvy profiteer, having instructed Victoria Police to go fuck themselves when presented with an invoice for services rendered following the MILO tour of December 2017, and presumably his legal battle with publicist Max Markson is going well, even if:

… the “bromance” is over amid wild accusations on both sides and a trail of debt, with Mr Markson claiming Mr Costas owes him $90,000.

On Thursday Mr Markson called Mr Costas a “lying conman”. Mr Costas, the publisher of Penthouse Australia and owning a company alongside one of Australia’s biggest drug dealers, convicted ice importer Sean Dolman, retaliated by calling Mr Markson “a very naughty boy” who “had his finger in the till”.

Note that in April, Queensland businessman Dan Spiller (AKA Future Now Australia AKA AE Media) announced that he’d be bringing McInnes Down Under. That effort immediately collapsed in a heap. Undeterred, a few months later Spiller announced that he’d mos def be bringing paedophile apologist Milo Yiannopoulos and wealthy blabbermouth Ann Coulter to Australia. That too quickly boarded the failboat, with gormless ticket-holders being told to go see McInnes and Yaxley-Lennon instead.

At this stage, it’s unclear if either McInnes or Yaxley-Lennon will be able to obtain a visa to enter Australia, the possibility of them doing so entirely dependent upon the whim of the Immigration Minister, David Coleman. Still, Melbourne lawyer Nyadol Nyuon has created a petition, calling upon the Minister to refuse the pair visas, a petition which has won the support of the Federation of Community Legal Centres and to date has been signed by over 53,000 people. For his part, the Shadow Immigration Minister, Shayne Neumann, has also written Coleman, requesting that McInnes be denied entry.

By the same token, a petition by ‘Tiny’ Avi Yemini — the Australian Liberty Alliance candidate for Southern Metropolitan Region at the upcoming Victorian state election — has attracted over 21,000 signatures, while another by Luke Chandler (AKA Luke Izaak) has garnered a mere 600.

As for the Piss Boys, today it was reported that the FBI now classifies far-right Proud Boys as ‘extremist group’, documents say (Jason Wilson, The Guardian, November 20, 2018):

The FBI now classifies the far-right Proud Boys as an “extremist group with ties to white nationalism”, according to a document produced by Washington state law enforcement.

The document also says: “The FBI has warned local law enforcement agencies that the Proud Boys are actively recruiting in the Pacific north-west”, and: “Proud Boys members have contributed to the recent escalation of violence at political rallies held on college campuses, and in cities like Charlottesville, Virginia, Portland, Oregon, and Seattle, Washington.”

Of course, what impact this has on the Immigration Minister David Coleman is anybody’s guess.

In other sad news, Comcast fires employee for alleged membership in the Proud Boys hate group (Elise Solé, Yahoo Lifestyle, November 17, 2018), while in New York, some other Proud Boys have gotten themselves into all sorts of legal difficulties. As noted previously, on October 12 McInnes was invited by the Metropolitan Republican Club to celebrate the anniversary of the assassination of Japanese socialist Inejiro Asanuma by a fascist teenybopper on that date in 1960; following the fuehrer’s blah, some of his meatheaded supporters attacked some folks in the streets. As a result:

Jeffrey Clark is the brother of the late Edward Clark, who allegedly killed himself hours after his Gab contact, Robert Bowers, allegedly murdered eleven people in a synagogue in Pittsburgh. Both Clark brothers were active in the DC alt-right scene, attended Unite the Right in Charlottesville, and were apparently close with organizer Jason Kessler. Jeffrey was charged with weapons charges after his family members contacted the FBI concerned about his social media posts.

In Melbourne, in response to the tour, both the Campaign Against Racism & Fascism (CARF) and new-ish project Stand Together Against Racism (STAR) have organised events. Thus on Friday, November 30 STAR has organised a rally, Nazis not Welcome – No Visas for Robinson & McInnes, outside the Immigration Department in the city. For its part, CARF have organised an action on December 11 (Protest British fascist Tommy Robinson + Proud Boy Gavin McInnes).

With the prospect of being sent to jail (again) in temporary abeyance, last week ex-British National Party stooge Yaxley-Lennon was denied a visa to the United States, where he was expected to address Republican lawmakers at an anti-Muslim event in Washington organised by Daniel Pipes. (Pipes came to Australia earlier this year to talk the same shit as a guest of the Australia/Israel & Jewish Affairs Council (AIJAC) — see : The Pipes They Are A-Blowing: An Extremist Tour Down Under, Michael Brull, New Matilda, March 10, 2018.) On Sunday, the little shit and some hired goons made the mistake of attending a Luton Town match. For what happened next, see : When ‘Tommy’ came back to Luton Town, Football Lads and Lasses Against Fascism, November 20, 2018.