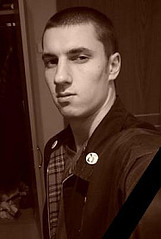 The nazi responsible for the attack has been arrested, but at this stage police are investigating the the incident as though it were the result of a regular pub brawl (the nazi has been charged with attempted murder).

Witnesses said prior to the stabbing, nazis attacked a group of anti-fascists in a pub, giving nazi salutes and shouting insults. Later they attacked Jan outside the pub. The attacker (a trained martial artist with more than 10 years experience in musado) stabbed Jan in the chest and in the back. Jan’s friends managed to stop the enormous bleeding from his chest before an ambulance arrived, but it was then discovered that he had been stabbed in the back as well. Jan lost a huge amount of blood as a result of the stabbing, and despite fighting, died two days later, losing his final battle on Sunday.

His favourite song was “Till the end of my life, I will be anti-fascist!” by the Slovak band RozpoR.

We will never forget!

Thanks to Pete from Prague for the original text (slightly edited). See also:

PS. Czech neo-Nazis had a march last weekend in Prague (Praha), after a planned demonstration in Pilsen (Plzen) got shitcanned by local authorities. The Czech press reports that:

Plzen- Vaclav Bures who organised the unauthorised neo-Nazi march in Plzen on Saturday was a member of the Czech senior government party, the Civic Democrats (ODS), at the time of the march preparation, iDnes.cz server wrote on Tuesday…

The neo-Nazis wanted to walk through Plzen centre, but Mayor of Plzen Pavel Roedl banned the action that drew a wave of resistance on Thursday last week.

That is why the rightist extremists changed their plans and met in Prague. The demonstration of some 200 people lasted about one hour and was calm.

Strunc said the ODS did not know what Bures is doing. Bures, however, called a similar action last April already. Some 50 extremists then protested in Plzen on his initiative against the imprisonment of Vlastimil Pechance that they said was unjust.

PPS. Contrary to the opinion of at least one punter on Bombshell zine Forum (from which I’ve apparently been banned and couldn’t be arsed re-joining), fascism is on the rise in Russia and other parts of the former Soviet Union. But hey, what would all of the groups dedicated to monitoring precisely this issue know that a local yuppie wouldn’t?

Prague/Moscow (dpa) – Seventy-five years after Hitler came to power in Germany the baleful influence of his ideology lives on with increasing numbers of racist attacks reported, particularly in the countries of the former Soviet Union.

In Russia, one of the main hotspots for neo-Nazi activity, human rights activists estimate there are roughly 70,000 [boneheads].

According to data from the Sova centre, 68 people were killed last year in racist crimes and 565 were injured in attacks. The number of attacks has increased by 20 to 25 per cent in recent years, the centre said…