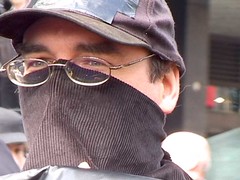 Crikey! Tricksy Darrin Hodges is… well… tricksy. That’s him (above), appearing as part of the fascist ‘black bloc’ at the APEC protests in Sydney last year. In September 2007, then, Darrin was a ‘national anarchist’. This September, Darrin is a candidate in the local council election in Sutherland Shire — and, presumably, a ‘democrat’, not a ‘revolutionary’. First, smash the state; then, a year later, ‘Vote 1 Darrin Hodges’. Tricksy Darrin has also — as previously noted — shut down his blog, thus preventing pesky journalists from being apprised of some of his more, ah, candid views on the matter of Muslims and the mud races. On the other hand, Jano Gibson, while being able to determine that Darrin is a member of the Australian Protectionist Party — and a former member of Dr. James Saleam’s Australia First Party — has proved unable to dig much deeper. While both APP and AF are ‘playing the race card’, it’s worth noting that Darrin has denounced AF as the ‘Australian Faggot Party’ following some rather… er… queer remarks by Queensland AF organiser John Drew. Darrin’s also described Dr. Saleam as a “criminal lunatic”, an “oily spiv”, a pathological liar, a “political gold digger” and so on and so forth.

Regarding the New Right / “national anarchist” demonstration Darrin briefly participated in, on September 13 Darrin objected to Saleam’s attempted appropriation of the event: “In a recent newsletter, Jim Saleam tries to co-opt the work of other nationalists by claiming he was involved in the planning and execution of the New Right APEC demonstration. This is what he is telling people, this is what he claimed in a recent newsletter…”. In reality, according to Darrin, “The nearest he came was sending his favourite lickspittle (who was told to fuck off) to spy on proceedings. As for being involved in the planning, nothing could be further from the truth and simply demonstrates that Saleam is nothing but a fraud”.

THREE years after racial tensions turned Cronulla into a riot zone, several candidates in next week’s council elections in the Sutherland Shire are running campaigns aimed at attracting the xenophobic vote.

Almost 1000 letters claiming the shire “has been slated for a new Third World refugee settlement” have been sent out by three candidates standing for the anti-immigration Australia First Party.

Another candidate, Darrin Hodges, a former member of Australia First who is the NSW chairman of the Australian Protectionist Party, has tried to link high-rise developments with an influx of Asian immigrants.

“To ensure that the Sutherland Shire remains a safe, peaceful and harmonious community of Australian heritage, it is important to prevent overdevelopment,” Mr Hodges said in a candidate information sheet submitted to the NSW Electoral Commission.

The IT consultant, 42, from Engadine, also wrote that he would oppose permits for mosques, sex shops and “any developments that undermine Australia’s traditional and family values”.

This is despite admitting to the Herald he had once been contracted to maintain the server of a company selling adult products over the internet.

Mr Hodges said Sutherland Shire should be a place for white Australians.

“It’s the birthplace of the nation. Europeans discovered and built this country and I can’t see any reason why the shire or any other part of Australia should not remain predominantly European.”

“If this scenario was played out, there would come the crime, the violence, the sexual assault and the undermining of our identity to an extent that would dwarf those other problems of just a few years back,” their letter states.

Mr Glas denied his party was engaging in race politics. “The media try to ramp us up as an uber racist party, which is simply not the case.”

He said local environmental issues, such as sandmining at Kurnell, were his party’s primary concerns.

The Mayor of Sutherland, David Redmond, who is standing for Community First, said residents had moved on from the riots and would not be attracted to xenophobic messages.

“I don’t believe they even represent a minority view in our Sutherland Shire,” Mr Redmond said. “I would also expect that after the election you will find that will have been the case.”