In Berlin (Germany) on May 14, antifa successfully prevented a small march of several hundred neo-Nazis (‘autonomist nationalists’) from getting very far; German police, however, did allow a number of the fascists to attack migrants and leftists and the day overall seems to have been quite eventful:

The police lost the control as the Nazi activists tried to force their march outside the second exit of the subway station. But here several hundred people blocked the route. Bottles, fire crackers as well as vegetables where thrown from both sides, several people got injured. The riot police finally managed to surround the Neo-Nazis but were themselves surrounded by left protesters. The situation was very chaotic and every few minutes scuffle broke out.

Speaking of neo-Nazi aping of alt.culture, antifa.cz on ‘The Big Neo-Nazi Crib’ is useful: Sydney-based neo-Nazi and ‘national anarchist’-turned-Volksfront organiser Welf Herfurth has gamely tried to advance the notion in Australia, but without much luck; the tiny, Melbourne-based student groupuscule ‘Nationalist Alternative’ flirts with the same model. Otherwise, ‘Australian Protectionist Party’ leader Darrin Hodges formed part of the ‘national anarchist’ ‘black bloc’ back in 2007. Sadly, his new political formation is being dubbed the ‘Australian Pathetic Party’ after its derisory performance in the NSW state election in March, and several recent demos that were tiny even by local fascist standards: 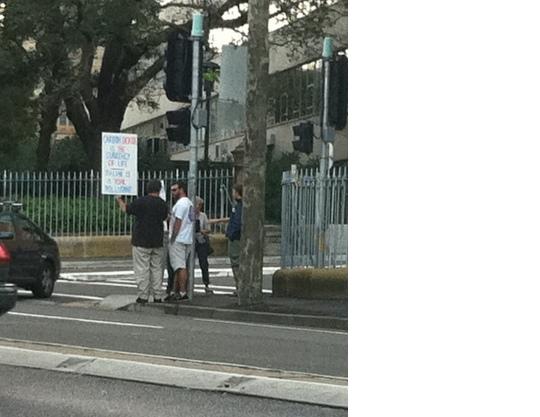 Of course, the other noteworthy event of late was the slightly truncated ADL rally in Melbourne on Sunday (video here). Fair play to the whinging pom and his barmy army: as a result of the protest, ADL leader Martin Brennan has twice been given the opportunity to air his views on radio, first by Neil Mitchell on 3AW on Monday and then by Martin King on MTR on Tuesday. Neither were especially sympathetic admittedly, but I suppose it’s better than being zapped by Muslamic Ray Guns.

In the US, the 10-year-old son of neo-Nazi Jeff Hall has been charged with his murder. Shortly before he was shot dead, Jesse McKinley conducted an interview with the NSM organiser: Domesticity and Radicalism Clash in a Neo-Nazi Home, The New York Times, May 12, 2011.

In Athens (Greece), fascists have been conducting pogroms against migrant workers; together with police, they have met resistance from anarchists and other anti-fascists. As ever, From the Greek Streets provides regular, ongoing coverage. ‘From the social trench of Villa Amalias’ is “a statement by the Villa Amalias squat in Athens regarding the events of the past days” (mid-May), and makes for typically sharp commentary:

For the past three days the wider area around Villa Amalias has seen events that any intelligent being living in the year 2011 would have thought to come out of a science fiction scenario. But this is not the case. This has been the reality for the past three years more or less: some have not experienced it, some do not want to see it, some are [stupefied] and refuse to see it, some become complacent — and yet some seem to seek it.

Under the pretext of the condemnable —by all of us— murder of the 44 year old Manolis Kantaris on the junction of Tritis Septemvriou and Ipirou street, some people decided the time had come for them to cleanse the area from those strange and grubby creatures (according to them), the migrants, launching an indiscriminate pogrom.

From the very first moment TV stations stepped into a dance around the dead body, ballooning all the wrongdoings of this case, and our well-known “neighbours” made an appearance once again to help the scared residents step out of their doorsteps. Could it be that “golden dawn” [Greek fascist organisation] is the new name of an entire area of Athens, not yet set because of some bureaucratic issues with its naming? All of a sudden, the death of a man by persons unknown with robbery as its motivation turned into the murder of an entire “nation” by “illegal migrants who act uncontrollably”. The ideal story for the fascist TV scenario writers who long [for] a greek purity they have lost for at least half a millennium (if it ever existed at the first place that is) in order to organise feasts, with their trophy being any migrant that would happen to cross their way.

In a blink, the rules of the game are overturned and from the point where all enraged greeks would condemn criminality and uncontrollable violence in their neighbourhoods, we now reached the point where anything is allowed as long as it is committed by greeks. Mobbing is allowed and so are mass beatings, stabbings, exemplary and throughout likeliness murders — like the one of the 21 year old Bangladeshi migrant [in the neighbourhood of Kato Patisia, trans.] Everything is allowed in the name of fear, survival, imposition and revenge. Cannibalism is allowed, too.

Social cannibalism. The result of dissolved society which refuses, whether willingly or not, to acknowledge the source of all this. To understand that the poverty and squalor never came, nor will it ever come from those from below in this world. Those from [below] are the recipients of a situation that is eternally fed by those above, those holding capital and power, because this is how they safeguard their continuity. The manipulation and subjugation of the world, with social, economic and class criteria, holds for them the balance of the base of the capitalist pyramid…

Perhaps most alarming, analysts here say, has been the resurgence of an anarchist movement, one with a long history in Europe. While militants have been disrupting life in Greece for years, authorities say that anger against the government has now given rise to dozens of new “amateur anarchist” groups, whose tactics include planting of gas canisters in mailboxes and destroying bank ATMs.

Some attacks have gone further, heightening concerns about a return to the kind of left-wing violence that plagued parts of Europe during the 1970s and 1980s. After urban guerrillas mailed explosive parcels to European leaders and detonated a powerful bomb last year in front of an Athens courthouse, authorities here have staged a series of raids, arresting dozens and yielding caches of machine guns, grenades and bomb-making materials.

The anarchist movement in Europe has a long, storied past, embracing an anti-establishment universe influenced by a broad range of thinkers from French politician and philosopher Pierre-Joseph Proudhon to Karl Marx to Oscar Wilde. Defined narrowly, the movement includes groups of urban guerillas, radical youths and militant unionists. More broadly, it encompasses everything from punk rock to WikiLeaks.

“Many of these are just a few frustrated high school students with a Web site,” said Mary Bossi, one of Greece’s leading terrorism experts. “But as we continue to see, others have the potential to be dangerous.”

A bit daft really, and factually mistaken (among other things, Faiola attributes to “anarchists” the assassination of Richard Welch, a CIA station chief in Athens; in reality, his death was one of a number of murders committed by the Marxist urban guerilla group ‘November 17’), but there you have it.

Anyway, finally… Raybon Kan’s Op Ed on NZ race relations (The Dominion Post, May 13, 2011) is interesting (word on the street is that a member of the neo-Nazi Kiwi Kyle Chapman’s family will soon be providing further public insight into Why Good Mormons Go Bad) and I really love this song!

I live in Melbourne, Australia. I like anarchy. I don't like nazis. I enjoy eating pizza and drinking beer. I barrack for the greatest football team on Earth: Collingwood Magpies. The 2023 premiership's a cakewalk for the good old Collingwood.
View all posts by @ndy →
This entry was posted in Anti-fascism and tagged Anti-fascism, antifa notes, Australia, Germany, Greece, United States. Bookmark the permalink.