Update : A commentator (‘Jesse’, Fri 05 Feb 10 (03:48pm)) on Andrew Bolt’s blog complains about another commentator’s (‘sasha of sydney’, Fri 05 Feb 10 (02:11pm)) linking to a previous blog entry (Robert Manne’s open letter to Andrew Bolt, July 3, 2006): “A link to a blog so far left that marxists think they’re a bit extreme? THAT is your counter argument? Why is it that reds quote other reds to try and prove that reds are right?” Take that, Spartacist League of Australia!

1. Communist Party of Australia (CPA)
[guilty of] a particularly wretched example of … abject defence of the capitalist order

The January 27 edition of The Guardian notes that the Adelaide CPA is on the campaign trail, with State Secretary Bob Briton as the endorsed candidate for the western suburbs electorate of Lee. The poll is to take place on March 20. “[M]embers are confident their work will lift the profile of the CPA in the area considerably”.

The February edition of Vanguard contains Duncan B’s reflections on ‘Joseph Stalin on Party Organisation’ (PDF). According to B, among the six features Uncle Joseph identified as being key to those of a Party organised on Leninist lines is ‘The Party as the highest form of class organisation of the proletariat’… which I think means that the CPA-ML will be directing their preferences to HEMP in future.

The always-outrageous (and sometimes disgusting) Van Thanh Rudd has thrown down the gauntlet to other communists with well-known relatives in the Australian political establishment by donning a white sheet with holes in it and standing outside the Australian Open. In other words, “Kevin Rudd’s nephew proved [Andrew Bolt’s] point when he stood outside the Rod Laver Area on Australia Day in his badly sewn Ku Klux Klan outfit… And so Australians generally are now being monstered in the Indian press as racists of the KKK kind, while at home we still refuse to discuss street violence – and the rise of the ethnic gangs behind some of the worst of it.”

In other news, if you’d like to know more about Uncle Hugo’s plans for a first second third fourth fifth International, a ‘Direct Action Forum’ on ‘The Venezuelan revolution & the call for a new Socialist International’ is taking place at 6:30pm on Thursday, February 25 @ the ‘Direct Action Centre’ (aka the Trades Hall Basement).

“Formerly the Democratic Socialist Party. Leninist, but not Stalinist and not Trotskyist, the DSP is enthusiastic about Cuba and Third World revolutions”; it is now also better known as the Socialist Alliance. “Public transport activist” Margarita Windisch has thrown her hat into the ring for the February 13 Altona by-election. Windisch is one of seven candidates expected to lose to Labor anointed Jill Hennessy. Unusually, Hennessy is a law-talking gal.

When they’re not cheering on capitalist counterrevolution or looking over their shoulders for Kiwi anarchists and/or English football hooligans, SAlt are busy embiggening revolutionary socialism. Otherwise… um… someone or other has established a Facebook group for those who dislike SAlt; former SAlt member Alistair Hullett died last week; former SAlt member Jeff Sparrow is referenced in the article referenced below ‘No criticism of Labor as Australia rejects Tamil refugees’ by Mike Head (January 20, 2010).

Mike Head reckons Inquest evidence shows Rudd government policies caused refugee deaths (February 2, 2010). In 2007, the SEP stood Will Marshall for Melbourne. He got 418 votes. Will Will stand again in 2010?

In a madcap attempt to undermine the stranglehold bourgeois art and culture maintains over the hearts and minds of angry proletarian yoof, the Socialist Party is calling on the Victorian State government to Scrap all anti-graffiti laws! (February 1, 2010). In an ominous sign of the repression to come, Comments are closed.

9. Solidarity
reformist opponents of revolutionary Marxism… crawling to the ALP

A member of the iSt, Solidarity are “for workers’ power and international socialism”. Beyond that, er…

10. Trotskyist Platform (TP)
a casualty of the retrogression of consciousness following the counterrevolutionary destruction of the Soviet Union

Sadly, there’s been no news from the Platform since July 2009. Instead, here’s a piece! of! spray! from! Australasian Spartacist, No. 192, Spring 2005: Editor Defects, “Trotskyist Platform”: Opportunism in Action! As an added! bonus! see! Sukant Chandan’s FRIENDS! OF! CHINA! blog. 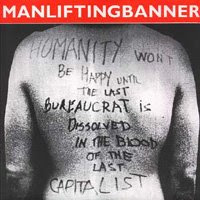 I live in Melbourne, Australia. I like anarchy. I don't like nazis. I enjoy eating pizza and drinking beer. I barrack for the greatest football team on Earth: Collingwood Magpies. The 2021 premiership's a cakewalk for the good old Collingwood.
View all posts by @ndy →
This entry was posted in Trot Guide and tagged Herbert A. Philbrick. Bookmark the permalink.