The corrupt, Masonic and Marxist Portuguese court system has sentenced a number of boneheads, members of the local Hammerskins franchise, to jail. According to one report:

“For the first time in Portugal, a collective of judges has handed down prison sentences for racial discrimination and inciting racial hatred. On Friday, the court at Monsanto in Lisbon found 31 out of 36 defendants – all boneheads – guilty of racism and crimes of a racist nature. Of these, six were handed down prison sentences, five were absolved, while the others received suspended prison sentences, were awarded fines or given community service orders. The longest prison sentence was awarded to Paulo Maia, who was given six years, while Mário Machado and Vasco Leitão – both linked to the extreme right party Partido Nacional Renovador (PNR) – were given four years. Paulo Maia was found guilty of racial discrimination, kidnapping, aggravated incitement, actual bodily harm and holding illegal arms. It was Maia who, two years ago in Amadora, shot and injured two men for racial reasons. Judge João Felgar also handed down a five-year prison sentence to defendant Pedro Isaque…” 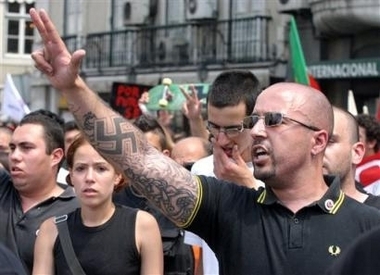 “Lisbon – Portugal’s main bonehead leader was Friday sentenced to 4 years and 10 months in prison, judicial sources said. Mario Machado, leader of the Portuguese section of the Hammerskin far-right group, was found guilty of racial discrimination, illegal possession of weapons, threats and violence. Six others were also handed prison terms, the length of which was not immediately given. Seventeen were given suspended prison sentences, seven were handed fines, and five were acquitted. Machado and 35 other suspects were detained in November 2007 on charges including attacks against Africans and dark-skinned Portuguese. Police seized firearms, munitions, knives, clubs, baseball bats and racist pamphlets.”

“Mario Machado, leader of the Portuguese far-right movement National Front (FN), was imprisoned Friday after 14 hours of questioning, a spokesman for the court said. A Lisbon judge decreed preventative prison for Machado. His lawyer did not give details, saying the charges against him were “public knowledge.” Nearly 30 far-right militants, including Machado, were detained Wednesday for possession of weapons and racist activities. Police searched some 60 addresses around the country. Three of the detainees were placed under house arrest pending trial. Six were ordered to report regularly to the authorities. The rest were released. Machado was sentenced to four years in prison in 1997 for participating in the killing of Alcino Monteiro, a Portuguese citizen of African origin, in Lisbon in 1995…”

13 Responses to Hammerskin goes to jail