The Australian Defence League has mixed-up confusion worse than their “Scottish” counterparts. First the League declared its support for a MASS RALLY AGAINST IMMIGRANTS AND ISLAM to defend Australia from WOMEN being STONNED / forced CIRCUMCISIONS by DIRTY ARABIC BUTCHERS / multiple WIVES and G*d knows what else their fertile imaginations could produce. Then they withdrew their support, and decided to promote the April 9 rally as a protest against SHARIA LAW (which, they maintain — with a straight face — is on the verge of being imposed upon the Australian population). Now the bizarros have once again cancelled their support for the event.

Or have they? Who really knows. But the ADL are surely the most pathetic League since the Patriotik Yoof.

(Also, sadly, one of the organisers of the mass rally, Robert Wills (PraiseMuhammad), appears to have exited Facebook. For the record, Robert liked UFC, Coca-Cola, women with nice racks, Carl Barron, loud music and free drinks, misses being a little kid and doesn’t give a f**k.)

In any event, Melbourne locals have organised a counter-rally to oppose the boofheaded bigots — a MASS RALLY AGAINST IDIOTS AND IGNORANCE. So if you’d like to let the bigots belonging to the League, the fascists in the ‘Australian Protectionist Party’, the ‘Southern Cross Soldiers’, boneheads, and all the other racist cranks who are planning on crawling out of the gutter to make a public spectacle of themselves on this occasion know that they are not welcome, do yourself a favour, and come on down. 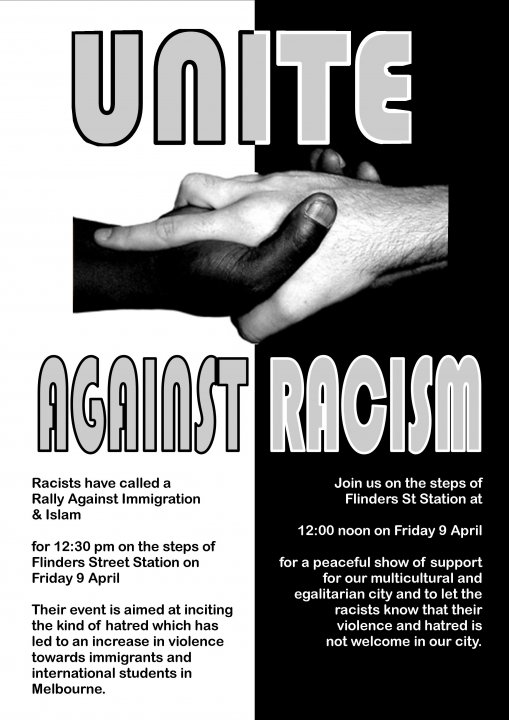 I live in Melbourne, Australia. I like anarchy. I don't like nazis. I enjoy eating pizza and drinking beer. I barrack for the greatest football team on Earth: Collingwood Magpies. The 2021 premiership's a cakewalk for the good old Collingwood.
View all posts by @ndy →
This entry was posted in Anti-fascism and tagged Australian Defence League. Bookmark the permalink.