It is not news to report that the Bolsheviks destroyed the anarchist movement in the Soviet Union. But how, and what were the consequences? These reprinted bulletins from the Joint Committee for the Defense of Revolutionists Imprisoned in Russia and the Relief Fund of the International Working Men’s Association for Anarchists and Anarcho-Syndicalists Imprisoned or Exiled in Russia show it as it happened. They ‘shed a little light on the struggles of our comrades and keep their names alive’ (p.x)…

Another call for unity on the left, this time by SA in Victoria (‘Socialism of the 21st century’ and left unity): “In Victoria this year we will most likely have both federal and state elections. It would be a real step forward if all socialist groups publicly supported the candidates of other socialist organisations (Socialist Alliance, Socialist Party, Revolutionary Socialist Party and Communist Party of Australia) and advocated a first-preference vote for them.”

The Socialist Equality Party — the Australian section of the International Committee of the Fourth International (ICFI), the world party of socialist revolution — is not included in this list, probably not without reason, as the SEP only make reference to the SA in order to denounce it, whereas the SA do what most everybody else does with regards the SEP, and ignore it.

Links — which is published by SA nee DSP — has published a statement by COSATU on “the brutal murder of Eugene Terre’Blanche on April 3, 2010″. Oddly, for an Australian-based publication, Links is most popular in the US, and by a fairly wide margin.

It’s unlikely — to put it mildly — that SA or any of the other Marxist parties will trouble any former lawyers as they make their way to their rightful place to a seat in State Parliament — although stranger things have happened. For my money — and keep in mind I live below the poverty line — the only possible exception would be inner-city Melbourne, where several seats — Brunswick, Melbourne, Northcote and Richmond, which are otherwise the property of Labor — are under pressure from The Greens.

“‘Spinning the Media’ is 6 month investigation by the University of Technology (UTS) Sydney and Crikey online news into the role PR plays in making the media.” Crikey asks: “Is the news you’re reading the work of a journalist … or a PR agent?” The obvious rejoinder being, ‘There’s a difference?’ See also : Alex Carey, Taking the Risk Out of Democracy: Propaganda in the US and Australia (University of New South Wales Press, 1988).

All-Embracing But Underwhelming is a blog by a Kiwi who works for The Illuminati. His role in undermining Kerry Bolton’s pioneering work in bringing THE TROOF to The Masses is currently being undertaken by way of that sinister institution known as The Academy.

Fuck Off We’re Full of Racists explores the Wide World of Racist Stoopid on Facebook (as well as providing some more serious commentary on matters relating to racial politics in Australia). 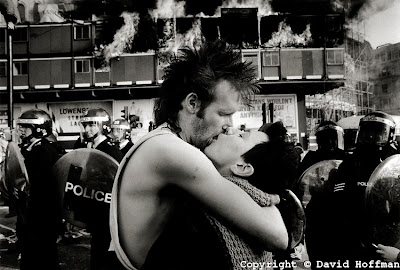 History is Made at Night – The Politics of Dancing and Musicking is neat-o, especially 1990: Trafalgar Square Memories (March 31, 2010), which is all about how the vilified and persecuted forces of genuine Marxism gathered around the newspaper ‘Militant’ saved the day… or not.

The bad old days will end is “Home of the Freedom Pass Anarchists and the wonderful world of professional wrestling, psychogeography, allotments and the class struggle.” The author writes: “On the day that I retired from my final job as a lockkeeper I left the following on the wall… I started work at fifteen years of age. Worked on the river and at sea but I also worked in factories and fields. In the circus and in films. I never achieved much. But I never crossed a picket line. Never judged a fellow worker by their colour or creed nor sucked up to the bosses for my own ends. Pretty much sums it all up.”

Welcome is a new(ish) French film currently on release in Australia. I saw it recently and, apart from an absence of car chases, it was pretty good, and a real tear-jerker (so ladies, bring a tissue). Margaret & David gave it ****.

In The Real World, Bad people in Calais, Brighton and elsewhere are flouting The Law in order to provide some degree of solidarity with the migrant workers whose plight is the subject of the film. Channeling Jesus Christ Himself, The Mad Monk pointed out on The Television earlier this week that He would support the Coalition’s policy on asylum seekers. The Mad Monk’s As to the Qs put to Him him by His his audience was masterful, apparently. Thus, to the shock and horror of its many critics, Uncle Rupert’s The Australian (by way of Patricia Karvelas) revealed him to be “at his best” (Softer Tony Abbott proves a winner on ABC’s Q&A, April 6, 2010).

Bonus spotting! “In a letter on the Kurdish struggle addressed to the Spartacist League, dated June 12, 2003, the IBT appended a postscript. You noted that as early as 1978, the Great Leader of the SL, Jim Robertson, referred to the Kurds as “Turds.” You were rightfully indignant at this blatantly chauvinist sneer. The recent diatribe against you in Workers Vanguard utterly fails to disprove your claim that Robertson obviously meant to be contemptuous of the Kurdish people. Robertson’s accusation that Reuben Samuels, the SL’s leading specialist on the Middle East and an advocate of the importance of the Kurdish struggle, was wasting his time on “the Turds” (capitalized in the original) could have no other intent. One of the former Spartacists who are now supporters of the LRP was in the room when Robertson made his filthy comment; he tells us that everyone there knew he was referring to the Kurds.

Russia has recently banned Adolf Hitler’s autobiographical work “Mein Kampf,” joining a number of countries where the “Nazi Bible” is already forbidden. State prosecutors said that a book that describes the concept of “Lebensraum” and paints the Slavic people as inferior beings has “a militaristic outlook and justifies discrimination and destruction of non-Aryan races, reflecting ideas which, when implemented, started World War II.” Experts suggest that the decision to add the book to the federal list of extremist materials signifies the Russian government’s wish to illustrate the war it is waging against the far-right movements. But can this war be won, especially after the Moscow metro bombings?

In Aotearoa/New Zealand, a bonehead has confessed to the murder of Jae Hyeon Kim, a Korean backpacker, in 2003. Shannon Flewellen admitted in the Christchurch High Court that he had helped choke Kim and stomped on his neck until he died (White supremacist admits killing Korean tourist, Keith Lynch, The Press, April 1, 2010).

Best ignored really eh; might scare the tourists — and their lovely money — away…