It’s interesting times for the Australian student movement. Following a spectacularly unsuccessful campaign to prevent the Federal Government (with the critical support of Family First Senator Steve Fielding) from introducing Voluntary Student Unionism (VSU) legislation, student unions, from the peak body the National Union of Students (NUS) to its dozens of affiliates, are facing a grim future. In summary:

On 9 December 2005, the Higher Education Support Amendment (Abolition of Compulsory Up-front Student Union Fees) Bill 2005 was passed in the Senate, and received the Royal Assent on 19 December 2005. From July 1 2006, [Australian] universities will not be able to compel union membership or fees. 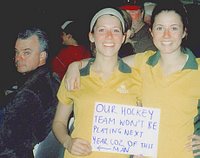 The general effects of this on campus life will vary, but as the legislation mandates the winding back or removal of a range of social services previously available to students for free or at minimal cost, it’s likely to result in a severe curtailment of what was once thought to characterise ‘campus life’. The legislation places additional pressures on University administrations to replace lost services, as well as placing many student unions in an impossible situation in relation to staffing and wages (see, for example, ‘Swinburne student union nears collapse’, Adam Morton, The Age, March 11, 2006).

One of the other effects of VSU will be the removal of the student union from its status as being the most important and lucrative resource for (student) political activists. Long regarded as a cash cow by the student left (and the various parties which feed on the student body), removal of funding will severely, and quite consciously, curtail — at least in the short- to medium-term — left student activism.

The NUS is obviously a dead duck as far as student activism is concerned, and with a small number of exceptions, always has been. Its principal function has been to provide a publically-subsidised training ground for future politicians. (In this, the NUS has functioned in a manner remarkably similar to that of many of its affiliates; providing income, resources and training to ambitious young student politicians.) In fact, the guaranteed income stream compulsory membership of student unions’ has generated for student politicians has placed both student unions and (other) opponents of VSU in a particularly difficult situation: the political reservoir from which a militant response to VSU might be drawn — one comprising a large number of students and young workers — simply doesn’t exist. Facing no requirement to convince students of the desirability of joining ‘their’ unions, student unions have, by default, been able to treat students with indifference, while ‘corruption’ in some student unions has even resulted in their forced liquidation (see also the highly amusing documentary film The State of the Union).

Where these developments leave the student left is an intriguiging question. Below is an account of the development of the largest left tendency within student politics. I’ll return to it later, as well as to the question of how anarchists should respond, both to VSU and to the student left.

The National Broadleft (NBL) was formed in 1999. Kate Carr, the first ‘national convenor’ of the faction, provides the following account of its origins:

After discussions at the four major student conferences this year, a new student group, the National Broad Left (NBL), was established in Melbourne on July 21.

The group will initiate national campaigns, intervene in student unions and operate as a united faction within the National Union of Students (NUS). The new group brings together progressive individuals and a range of left organisations within the student movement, including Left Alliance (LA), Resistance, parts of the Non-Aligned Left (NAL) and Love and Rage…

More than 200 people participated in discussions held throughout the country before NBL’s formation. The significance of the creation of a nationally unified left within NUS cannot be overestimated.

Until now the left has been divided into two major factions (LA and NAL) at NUS national conferences, resulting in poor collaboration and communication within the left around policy for NUS and the election of office bearers.

The NBL explicitly advocates challenging the ALP-dominated leadership of NUS and changing NUS’s campaign strategy from one of lobbying the ALP to sparking broad campaigns which involve and inspire students to fight for progressive social change.

It is hoped that the formation of NBL signals a period of constructive collaboration between left activists around the country and will facilitate healthy debate around priorities for the student movement.

When it became clear that the majority of those involved in the NBL were not willing to place political pressure on NOLS to support the left office-bearer candidates over the right-wing of the ALP, Resistance left the NBL.

During the NUS conference, the NBL changed its original position and began arguing for NOLS to form a left bloc.

Even more importantly however, most independent left activists have left the NBL and it is not attracting new student activists. Nor will it do so if it continues to capitulate to the ALP left, rather than challenge it.

The task for left activists in NUS is to work together to provide a political challenge to the ALP. With the recent events at S11 and with M1 ahead of us, the left should be able to inspire a new layer of students to struggle against the corporatisation of higher education. But we will not convince these students to take up the fight in student organisations if we simply play games with the Labor student bureaucracy.

Instead we should be drawing these people into a united left faction that seriously aims to win control of NUS away from the ALP and transform it into a left-wing led, democratic, accountable and activist-based national student union.

Here’s another account of the disintegration of the NBL. Interestingly, events at Woomera2002 (late March — early April) are considered pivotal.

In 2002, after the events at Woomera, it was fairly clear that it wasn’t desirable to work with Socialist Alternative. Further, a number of students had had enough of the prevailing fixation on the pointless antics of NUS, and for activist purposes wanted to extricate themselves from the whole schamozzle, while at the same time maintaining cross-campus connections. In essence, what was wanted was an organisation something like what segments of NBL became immediately after S11.

The biggest hurdle was the unofficial leadership (the ‘numbers’ people). While making sympathetic noises, they were neck-deep in factionalism. In response, some anarchists, a group of younger students from Sydney and a few greens started having their own, independently-organised meetings. These took place during the pre-caucus leading up to NUS national conference. (The Trots, predictably enough, reacted especially badly at news that a meeting had been called for people interested in ‘anti-authoritarian ideas’ and ways of ‘subverting NUS’.) Some of the rebels even made some ‘Rebel Alliance’ patches: a sign of dissent at the existing orientation of the NBL towards competing for office in the Galactic Empire.

As opposed to changing things.

In a fairly cunning move, the ‘unofficial leadership’ started regularly attending these meetings, and with some bullshit here (and some bullshit there), devolved the ‘Rebel Alliance’ into just another sub-faction of the NBL, complete with nominees for office bearing positions. The original network of people who’d formed the Alliance proved unable to stop this devolution, either thinking themselves outnumbered (and therefore powerless to protest) or simply being too naive to do so… until it was too late.

So, the ‘Rebel Alliance’ became little more than a non-Trot faction, and the basis for working together little less than a shared antipathy toward Socialist Alternative. Predictably, this lead to some fairly bizarre behaviour, including alliances with parts of the ALP, and pointless red-baiting. In the absence of some more rigorous ideological framework from which to structure its activity, such a lame, reactionary approach to factional organising simply wasn’t sustainable, and its disintegration meant that the collapse of the NBL as a whole was merely a matter of time.

I live in Melbourne, Australia. I like anarchy. I don't like nazis. I enjoy eating pizza and drinking beer. I barrack for the greatest football team on Earth: Collingwood Magpies. The 2021 premiership's a cakewalk for the good old Collingwood.
View all posts by @ndy →
This entry was posted in Anarchism, Student movement, Trot Guide. Bookmark the permalink.