…died of natural causes. Further, anarchist protesters assaulted police, who bravely endured the attacks of the violent mob while they scrambled desperately to save the apparently injured man’s life.

“City resident Ian Tomlinson, 47, was on his way home from his job at a newsagent’s. He suffered a suspected heart attack but officers had to move him away from the front line after bottles were thrown at them” (Squats raided in hunt for G20 rioters, The Australian, April 3, 2009).

Walking home, hands in his pockets, this video shows the moment newspaper seller Ian Tomlinson was attacked from behind by a baton-wielding police officer.

Hours later Mr Tomlinson, aged 47, who appeared to be playing no role in the G20 protests that brought parts of London to a standstill last week, was dead.

The dramatic film shows that Mr Tomlinson, who was married, did not speak to police or offer any resistance, before police – some in riot gear, others with police dogs – surge up behind him.

Then a Metropolitan police officer appears to strike him from behind with his baton, hitting him on his upper thigh.

Obviously, Ian was reaching for a gun. 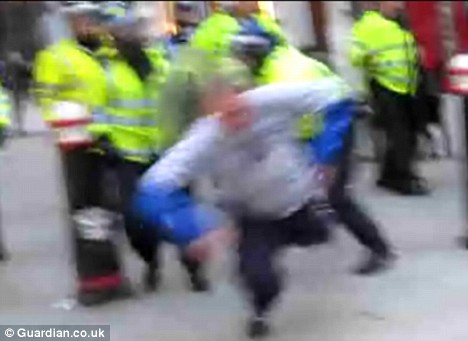 Video of police assault on Ian Tomlinson, who died at G20 protest

The Guardian obtained this footage of Ian Tomlinson at a G20 protest in London shortly before he died. It shows Tomlinson, who was not part of the demonstration, being assaulted from behind and pushed to the ground by baton-wielding police.

I live in Melbourne, Australia. I like anarchy. I don't like nazis. I enjoy eating pizza and drinking beer. I barrack for the greatest football team on Earth: Collingwood Magpies. The 2021 premiership's a cakewalk for the good old Collingwood.
View all posts by @ndy →
This entry was posted in Media, State / Politics. Bookmark the permalink.