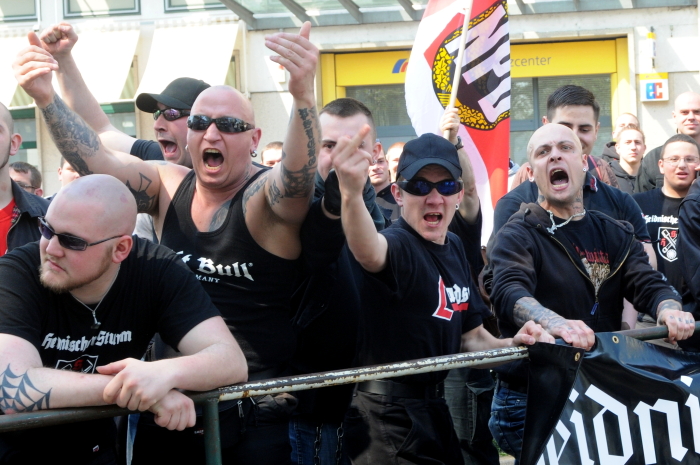 It was curious to note that on May Day in Germany a trades union rally was attacked by a mob of 300 or so neo-Nazis. An account of this incident is available by way of the Trotskyist World Socialist Web Site: Germany: Neo-Nazis attack May Day demonstration in Dortmund, May 9, 2009.

Two points of interest are that the social democrats on the march were seemingly unprepared to face the nutzi mob, while German authorities — despite having the obvious capacity to monitor any preparations for such an assault — appear to have allowed the attack to proceed: the policeman who kicked a Turkish demonstrator in the head while he lay prone on the ground perhaps embodying the attitude of the institution social democrats rely upon to protect them from the nutzi menace.

Approximately 300 neo-Nazis attacked a demonstration organised by the DGB, the German trade union federation, on May 1 as it set off from the square in front of the old synagogue towards Westphalia Park…

Armed with sticks, firecrackers, stones and lumps of clay containing glass fragments the Nazi thugs attacked a contingent of Kurds and Turks at the rear of the demonstration, injuring several people, including some police officers. One demonstrator was said to have received serious injuries after being hit by a bullet-like projectile.

The DGB demonstrators attempted to defend themselves. The relatively few police officers present, who were poorly equipped, tried to separate the two groups. Some of those on the DGB demonstration were treated with extreme brutality by the police, as is shown in photos published in the press and in one video, which clearly shows a prostrate Turkish demonstrator being kicked in the head by a policeman in full riot gear…

On the bright side, an action which would no doubt bring a smile to Tim Blair’s face.

Not unexpectedly, our correspondent infantilises the ‘misguided young “left” Autonome’ who engage in direct confrontation with the state and its little helpers the nutzis, but is less sanguine on the manner in which the German left might protect itself from attack at future public events — a certainty given the size and growing strength of militant fascist groups.

A communiqué from Autonome Antifa Freiburg, on the other hand, is a little more direct: Beat the Fascists wherever you meet them! (Schlagt die Faschisten, wo ihr sie trefft!) It identifies the ‘autonomous’ or ‘free’ nationalists — essentially, the extra-parliamentary far right — as being “a new form of right-wing radicalism in Germany”, one which first came to major media attention only last year (but which has been developing slowly for many more years). Aside from its rejection of close stewardship by the leading neo-Nazi party the NPD, the autonomists distinguish themselves by way of their aping the tactics of their ‘antifa’ opponents. The protection the German state provides their public assemblies, and the impatience many on the far right have with the arrogance and corruption of the NPD, have proven attractive to a number of racist youth in Germany. Given that, in one study, almost 5 per cent of boys ‘said they belonged to a “right-wing group or Kameradschaft“, the future is looking rosy for the ANs.

On the other hand, as some local punk conservatives have observed, ‘who gives a shit about Germany’, and if I’m so interested in Germany, ‘why don’t I go live there’? (On ‘conservative punk’, see Liz Worth, ‘From the White House to the Punk House’, Punk Planet, No.72, March/April 2006; some Melbourne punks are also rather conservative.)

On May Day 2009 around 1,000 Nazis marched through Ulm (Baden-Württemberg) and Neu-Ulm (Bavaria) where they were confronted by 5,000 counter demonstrators. On this day there were further fascist demonstrations, with a total of 3,000 participating Nazis. Despite the militant resistance in Ulm, the only Nazi march that could be prevented was in Mainz. The march in Ulm was organised by the youth organisation of the National Democratic Party of Germany (NPD), the young national democrats (JN). A broad spectrum of fascists participated at the march.

While in Ulm autonomous Antifa were subjected to excessive police violence, they were yet again betrayed by the “German Confederation of Trade Unions” (DGB) but received solidarity only from Kurdish as well as communist demonstrators. The DGB has yet again placed itself in the tradition of May Day 1933. Even then the Nazis attempted to transfigure the international workers day into the “day of national work”. On the 2nd of May 1933 they devoured the trade union movement while on the day before part of the trade Union movement went on the streets together with the Nazi Party. Every year the Nazis try to claim May Day for themselves so that its roots will be forgotten: The anarchist assembly in 1886 at the Haymarket in Chicago to promote a general strike for an 8 hour working day.

May Day 2008 became a signal for a new form of right-wing radicalism in Germany. For the first time the “Autonomous Nationalists” (AN) received attention from the media. It was then that 1,100 Nazis from a militant youth subculture marched through the Barmbeck district of the city Hamburg. Over 9,000 leftists gave resistance, the Nazis concentrated their attacks against members of the press as well as political opponents. The police were surprised and dumbfounded by the new quality of right wing militancy. Within the scene the attention resulted in a greater momentum in the attractiveness of the AN. The AN present themselves as a superficial right-wing rip-off of Autonomous Antifa and are attempting to develop a violent and modern image in order to attract young people. Although they are turning away from traditional repugnant Nazi images such as the narrow minded hair parting (aka Hitler) or the thuggish Nazi-skin, in order to appeal to a new generation, they have however failed to achieve the support of a broad spectrum necessary for a mass movement.

On the 12th of April 2008, 800 ANs had already marched through the town of Stolberg (North Rhine-Westphalia). The reason for this is that on the 4th of April a youth had been killed in a street fight after attending an NPD meeting. The largest rally so far by the Autonomous Nationalists occurred on the 6th of September 2008 when 1,200 Nazis, despite counter-protests from 1,800 left-wing demonstrators, were able to march undisturbed through the streets of Dortmund (North Rhine-Westphalia). The march was to commemorate the German invasion of Poland on the 1st of September 1939. The Nazis have been commemorating the start of the second world war for the past four years, cynically running under the motto of “national anti-war day”. On the 1st of May 2009 the AN marched once again through their stronghold Dortmund, this time 300 of them attacked a Trade union demonstration.

On the 13th of September 2008 1,100 Nazis took part in the 4th “Festival of the nations” (Fest der Völker/Fdv) in Altenburg (Thuringia), they were met by 2,000 left-wing counter-demonstrators. At the annual Rechtsrock (Rock against communism) festival, organised by the NPD, the bands which play mainly belong to the music network “Blood and Honour”. Hardcore Nazis from all over Europe travel to this festival which serves as an opportunity to improve right-wing networks. Many of the Nazis are independent of political parties organised into the so-called “Freien Kameradschaften” (independent camaraderie organisations). The aim of such large meetings, such as the “Festival of Nations”, is to construct so-called “nationally liberated zones” within larger cities, which in contrast to some rural areas will only exist for a limited time.

The largest Nazi demonstration in Germany, since the end of the second world war, took place on the 14th of February in Dresden (Saxony). On the anniversary of the allied bombing 6,500 Nazis, from all over Europe, marched through the city. Although for the first time this year, several thousand left-wing counter-demonstrators also attended, the revisionist event has managed to inscribe itself in the agenda of European Nazis. Just as the marches in Wunsiedel (Bavaria) to the grave of Rudolf Hess or the annual party of the NPD newspaper “Deutschen Stimme” (“German voice”) mostly in towns in East-Germany before, Dresden has become the main annual meeting of European Nazis.

The three main characteristics of the larger Nazi meetings is networking and organising, promoting self confidence in the internal ranks and demonstrating a potency to the outside world. The reason why the Nazis are meeting is unimportant, as long as they serve as an identification function for the whole Nazi spectrum. This is especially the case for historical revisionist themes, where mainly Nazi political strongholds are selected. It is not enough to just stop the larger Nazi meetings, the Nazis have shown that they are able to react flexibly to legal restrictions. Besides fighting against the Nazi ideology present within the society and reporting about Nazi activities it is completely necessary to smash the Nazi structures: every single Nazi has to be attacked by any means necessary.

In Australia, the ‘autonomous nationalists’ have established a tiny foothold among the far right, with the only development of any real significance of late being the announcement of an informal alliance between the ‘New Right’ and boneheads belonging to ‘Volksfront Australia’. The chief architect, in both cases, is the Sydney businessman, German-born ex-NPD member Welf Herfurth. Presumably, the handful of boneheads belonging to Volksfront are intended to supplement the teenyboppers Welf has assembled around the banner of the New Right.

The local Blood & Honour franchise apparently held a gig on April 25 in Perth. Presumably, given media attention and political pressure from the local ‘ethnic’ lobby, police monitored the event, but were otherwise happy to ensure that there was no ‘trouble’. At some point, more details will be forthcoming, but being 2,700kms away from the city in which the gig was held makes it a little difficult to ascertain much of anything.

In Athens, Greece, 300 (100?) or so fascists belonging to Chryssi Avghi (‘Golden Dawn’) have enjoyed whinging and whining in public about 500 or so immigrant workers currently squatting a building in the city. Despite being fuckwits, bums and lowlifes, the ‘foreign’ squatters were joined in attacking the pea-brained racists by a group of anarchists, while other leftists also counter-demonstrated. Naturally, police had to intervene in order to ensure the fascists were able to beat at least some immigrants before making a safe exit; sadly, it appears that a number of the squatters were injured during the confrontation, although whether by fascists in uniform or out of uniform is not known [BBC video]. Further disco on the collaborative efforts of Greek neo-Nazis and Greek police is available @ the blog clandestinenglish: Police and Neo-Nazi scum collaborate once more in Athens…, May 10, 2009.

…The neo-nazis when obstructed from doing the demo started beating randomly immigrants with iron bars in Menandrou street. The police all the time looked but not intervened. Their collaboration got even tighter when the neo-nazis moved towards their headquarters, which is located near the Court of Appeals building at Socratous Street. Under the protection of the riot police, from their hq’s roof and then from the street, the neo-nazis attacked the building where immigrants find refuge with stones and flash and sound grenades. The neo-nazis were all wearing helmets, this at a time when in Greece the state attempts to illegalise hoods in protests. They tried to invade the building but the immigrants defended it with stones. Four protestors and many immigrants were injured. A girl was arrested…

I live in Melbourne, Australia. I like anarchy. I don't like nazis. I enjoy eating pizza and drinking beer. I barrack for the greatest football team on Earth: Collingwood Magpies. The 2021 premiership's a cakewalk for the good old Collingwood.
View all posts by @ndy →
This entry was posted in Anti-fascism, Broken Windows. Bookmark the permalink.