The University of Adelaide & WebSense ~versus~ slackbastard

As noted previously, this site is blocked by a number of different institutions, including public libraries in Bristol, Spanish engineering companies, internet cafes in Athens, and — closer to home — the University of Adelaide. 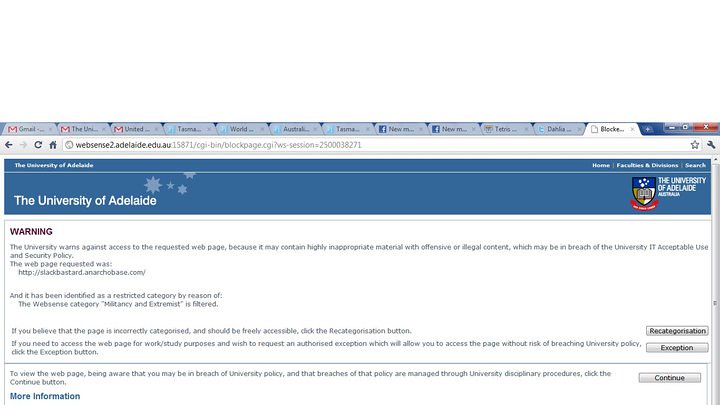 The University of Adelaide employs a US company named WebSense to undertake monitoring and censoring of content available to users. In being blocked by WebSense slackbastard is in pretty good, albeit controversial, company: in November 2007, it blocked the website of Norman G. Finkelstein on the basis that, in the opinion of WebSense, the site was racist. My own site is blocked on the basis of its ‘antigovernment’ content. According to WebSense:

Militancy and Extremist – Sites that offer information about or promote or are sponsored by groups advocating antigovernment beliefs or action.

Until August 2009, WebSense software was also being used by the Yemeni government to filter Internet access.

Assuming that the University of Adelaide agrees that being ‘against government’ is unacceptable, this is fair enough. However, if this rule is to be applied fairly, I would urge University authorities to examine the contents not only of blogs such as mine, but also its library shelves, as a quick search of the library’s online catalogue reveals the existence of not one or two or even three items classified as ‘anarchist’, but almost eight thousand titles.

Of course, having purged its library of books that offer information about or promote or are written by authors advocating antigovernment beliefs or action, the University will need to begin to examine the contents of its courses more closely, as well as the general calibre of its academics…

I live in Melbourne, Australia. I like anarchy. I don't like nazis. I enjoy eating pizza and drinking beer. I barrack for the greatest football team on Earth: Collingwood Magpies. The 2023 premiership's a cakewalk for the good old Collingwood.
View all posts by @ndy →
This entry was posted in Anarchism, Media, Student movement, That's Capitalism!, War on Terror and tagged slackbastard, University of Adelaide. Bookmark the permalink.

2 Responses to The University of Adelaide & WebSense ~versus~ slackbastard