Striking workers at Baiada Poultry factory have been standing strong in the face of a brutal police assault on their peaceful picket line on Friday night that saw one worker hospitalised. Now they need your support.

The Supreme Court has banned officials from the NUW, the workers’ union, from supporting or organising a picket so union members and supporters have stepped in to organise a community picket.

Join the rally to stand up for decent wages, decent working conditions, and the right to peaceful protest… 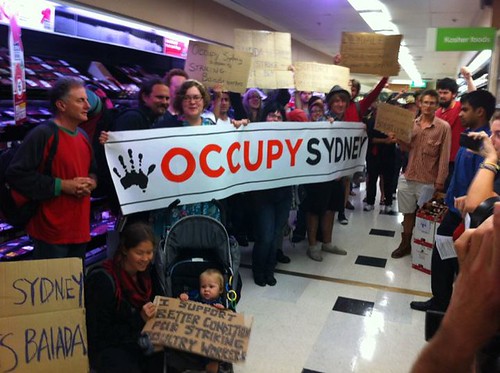 Meanwhile in Sydney, Occupy Sydney briefly occupied a Coles supermarket in solidarity with striking workers. (Baiada supplies chickens to Aldi, Coles, KFC, Nando’s, Red Rooster and Woolworths.) On the other hand, from her vantage point on Sydney’s desperately impoverished North Shore, trollumnist Miranda Devine has written in The Daily Telegraph some blah blah blah on the subject of the EVIL! UGLY! union thugs of the NUW.

Note that, in addition to providing low pay and hazardous working conditions, Baiada is one of several companies the Australian Competition and Consumer Commission has instituted proceedings against in the Federal Court, alleging misleading or deceptive conduct in relation to the promotion and supply of chicken products, specifically its claim that free-to-roam means two chickens being allocated a space equivalent to an A3 page.

I live in Melbourne, Australia. I like anarchy. I don't like nazis. I enjoy eating pizza and drinking beer. I barrack for the greatest football team on Earth: Collingwood Magpies. The 2020 premiership's a cakewalk for the good old Collingwood.
View all posts by @ndy →
This entry was posted in State / Politics, That's Capitalism! and tagged Baiada Poultry. Bookmark the permalink.