“The left should offer no comfort to these crazies. We should do whatever we can to isolate them. They are wreckers. If they grow in Australia it will simply make it harder to build future protests and movements.” ~ Mick Armstrong, Socialist Alternative, November 19, 2006

Before we talk about the G20 case, I want to acknowledge that we’re standing on Aboriginal land: on the land of the Eora people of the Gadigal nation. And I want to say that not just because it’s true, but also because when we’re talking about state violence and resistance to state violence it’s important to remember that it began here in 1788 and has continued ever since.

In November 2006 the G20 (the finance ministers from the 20 richest countries) met in Melbourne and protests began on Friday with ‘corporate engagement day’. As part of that the offices of defence force recruiting, of a company called Tenix, which is a military contractor, and branches of ANZ bank, which is profiteering from the occupation of Iraq, were targeted. These visits did manage to shut down every branch of the bank in the CBD.

The next day, as is standard for any meeting of the powerful, the city was blocked off with cops and barricades. Thousands of people defied this intimidation to protest in the streets of central Melbourne and a few hundred people – some of them disguised – diverged from the rally, ran around a bit, dismantled some barricades and smashed the windows of a police van.

Now, according to the state, the corporate media and some sections of the left, these actions were pretty much The Worst Thing Ever. We think there are plenty of good reasons for people to be angry under capitalism and about not having much say in how things work.

Arrests began the next day [Actually, I witnessed a few folks being arrested by snatch squads during the evening of the first day’s protest]. The newspapers published ‘dob in a thug’ photo sheets. The police formed a taskforce that raided houses and hung around pubs trying to get information. They carried out dawn raids in Sydney in cooperation with the APEC taskforce and the counter-terrorism squad. Part of the campaign of fear was that people were given unusually serious charges and lots of them. Things like riot, conduct endangering life, aggravated burglary. This was all part of trying to intimidate and isolate people.

All up 28 people [from New Zealand] were charged. One person, Akin Sari, is currently in jail serving a 28-month sentence.

Most of the other arrestees pleaded guilty to reduced charges and got fines, suspended sentences and/ or community based orders. However, three people are to go to trial in Melbourne County Court starting June 30.

There’s a [crazy!] mother from Melbourne – all they’re saying she did was wave a flag and yell, and she’s fighting riot charges. There are also two people from Sydney facing charges of aggravated burglary, which can carry a 25-year jail term, for allegedly walking into those offices on ‘Corporate Engagement Day’ with nothing more than glitter and water pistols [ultra-violence!].

These people have been through three years of worry, of travelling [the world looking for violence!] to court, of reporting to the police station on bail. They need our support so that individuals under attack aren’t left isolated [wreckers!]. Clearly these cases are about far more than the fate of the individuals caught up in them. As political prosecutions they’re part of a much broader attack – and their outcomes, and how we deal with them, will affect all of our abilities to act on our opposition, whatever tactics we use.

In many ways police attacks and the criminalisation of dissent aren’t new. There’s a man in jail in Queensland right now called Lex [crazy! ultra-violent!] Wotton: his crime was taking part in protests against the police after a cop beat Mulrinji Domadgee to death in a cell on Palm Island. The only reason this particular Aboriginal death in custody really made the news was because the community responded by burning the police station down. The cop was still found not guilty, got a promotion and compensation.

NSW police have new secret search powers and the new bikie laws can send people to jail solely because of who they hang out with. We had APEC with its secret blacklist and the thousands of cops on the streets. A bunch of Muslim men are in maximum security jail for the most bullshit excuse for a ‘terror plot’ ever.

This is how it works for a whole lot of people and those of us here who haven’t yet been personally hit with it need to understand that this affects us too. This is why solidarity is crucial.

The trial of the remaining G20 arrestees is potentially a key moment in developing a culture of political solidarity in Australia. Being involved in solidarity may not always be the most exciting thing to be doing, but as revolutionaries who will continue to face state repression, it is crucial to support and sustain people who are struggling to deal with the practical and mental difficulties of going through a long legal process, so that we all feel we are able to continue to participate in longer-term struggles and projects.

“any movement that does not support their political internees … is a sham movement” ~ Ojore N. Lutalo

Also, apart from donating money to help with legal and other costs, consider coming to Melbourne if you can while the trial’s on. Many of us manage to travel distances for political conferences and protests and it would seem at this time that being in Melbourne for this trial is as important as any of those. In between sitting around court there’s going to be political discussions about how we do support and solidarity in the future.

This is the text of a speech by the G20 Solidarity Collective, Sydney with additions by SourDough.

To donate to the solidarity fund:

“These are feral, low-life people that want society to be in a state of near anarchy for their own perverse pleasure. Let’s not mince words here. People who say they are anti-war but resort to violence and destruction to put their case are clearly a bunch of people who are dangerous to society. These are just anarchists that enjoy disrupting civil society. They do not have one fig of credibility.” ~ SA Deputy Premier, Treasurer, Minister for Industry and Trade, Minister for Federal/State Relations Mick Armstrong Kevin Foley, September 6, 2008

What were the objections to the forming of a police force?

Some people believed that if the people wanted one they should do it themselves, not have the government do it for them.

It was also feared that the police force would be used to arrest opponents of the government, stop protests and destroy free speech. It was thought that the idea of a police force belonged in a foreign country.

How did it come about?

Robert Peel became the Tory Home Secretary in 1822. The Metropolitan Police Act of 1829 set up an organised police force for London, with 17 divisions, each with 4 inspectors and 144 constables. It was to be controlled from Scotland Yard, and answerable to the Home Secretary.

They became known as ‘Peelers’ and ‘Bobbies’ after their founder, and wore a dark blue longcoat and a tall hat which they could use to stand on and look over walls. Blue was chosen because it was the colour of the popular Royal Navy rather than red which was the army’s colour and struck fear into the people because of the way soldiers had been used to smash protests. The only weapon was a truncheon.

How did the public react?

They hated the Peelers. Many were poor quality – drunks and bullies. Of the first 2,800 new policemen, only 600 kept their jobs. The first policeman, given the number 1, was sacked after only FOUR HOURS! (He was legless.)

In 1833 PC Robert Culley was stabbed to death after the police broke up a political meeting. The jury acquitted the man who killed him, and a newspaper awarded the jurors medals! JPs were also angry that they had no control of the police.

Eventually however the impact upon crime, particularly organised crime led to an acceptance, if not approval, of the Bobbies. 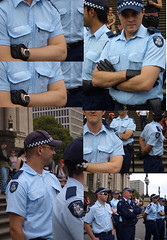 Above : Police @ G20. In a move which stunned all and sundry, many elected not to wear any identification.

I live in Melbourne, Australia. I like anarchy. I don't like nazis. I enjoy eating pizza and drinking beer. I barrack for the greatest football team on Earth: Collingwood Magpies. The 2023 premiership's a cakewalk for the good old Collingwood.
View all posts by @ndy →
This entry was posted in Broken Windows, State / Politics and tagged G20. Bookmark the permalink.