Last December, Occupy Los Angeles proposed a General Strike on May 1 “for migrant rights, jobs for all, a moratorium on foreclosures, and peace – and to recognize housing, education and health care as human rights.” The idea has spread through the Occupy movement. Occupy Wall Street in New York recently expressed solidarity with the proposal and called for “a day without the 99%, general strike, and more!” with “no work, no school, no housework, no shopping, take the streets!” Reactions are ranging from enthusiastic support to outraged skepticism. What form might such an action take, and what if anything might it achieve?

In Victoria, ‘Labour Day’ is celebrated not in May but in March (on the second Monday). Elsewhere in Australia, May Day proper (May 1) is only celebrated in Queensland and the Northern Territory (on the first Monday). State propaganda proclaims that “Labour Day in Australia celebrates workers’ contribution towards the nation’s economy” while May Day is largely ignored and has been for some years. In Melbourne in 2001 a half-hearted attempt was made to revive the day but this soon ended, and for all the obvious reasons.

This year, the VTHC will again be organising an Event on the first Sunday (May 6) following May Day, AAWL has organised a rally at 5.30pm outside the State Library, on May 2 ASF Melbourne has organised a Sparks retrospective to be held at the Melbourne Anarchist Club and I dunno what else is gonna happen on the Day (maybe you do?); a general strike, perhaps?

Sparks was published 1986-91 originally by ASF Melbourne and then the Public Transport Workers Association (PTWA-ASF) and became the most widely read anarcho-syndicalist paper in Australia with a circulation in excess of 5,000. A former editor of Sparks will give a talk about the magazine and its impact in public transport industry in Melbourne as well as a brief history of the PTWA.

Scanned copies of original front covers will be on display. Refreshments available.

May Day 2012 also marks the sixth anniversary of my blogging @ anarchobase.com. Thanks to a and D for the assist. 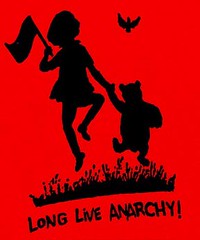 I live in Melbourne, Australia. I like anarchy. I don't like nazis. I enjoy eating pizza and drinking beer. I barrack for the greatest football team on Earth: Collingwood Magpies. The 2020 premiership's a cakewalk for the good old Collingwood.
View all posts by @ndy →
This entry was posted in Anarchism, History, State / Politics, That's Capitalism! and tagged May Day. Bookmark the permalink.

2 Responses to May Day in Melbourne 2012