May Day this year falls on a Wednesday.

At 11.30am the Wednesday Action Group will be meeting outside Her Majesty’s Theatre, 219 Exhibition Street (once home to the Melbourne Anarchist Club in the 1880s).

At midday there will be a gathering of anarchists and others at the 8 Hour Monument (cnr Victoria and Russell Streets) and another (organised by Australia Asia Worker Links) at 5.30pm at the State Library (328 Swanston Street).

On Sunday May 5 from 1pm the Victorian Trades Hall Council (by way of the Melbourne May Day Committee) is holding a rally and march. (The Committee is organising several other events as well: check their blog for more details.) The Socialist Alliance has also organised a breakfast. With toast.

That afternoon the contemporary Melbourne Anarchist Club (and perhaps even some of the ghosts of Exhibition Street) will be holding a BBQ from 4pm. 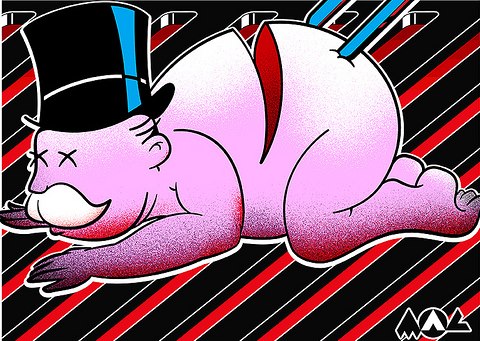 I live in Melbourne, Australia. I like anarchy. I don't like nazis. I enjoy eating pizza and drinking beer. I barrack for the greatest football team on Earth: Collingwood Magpies. The 2023 premiership's a cakewalk for the good old Collingwood.
View all posts by @ndy →
This entry was posted in Anarchism, History, State / Politics, That's Capitalism! and tagged May Day. Bookmark the permalink.