May Day is May 1 is this Sunday. There’s a few things going on, to which the following is a guide.

The Victorian Trades Hall Council is organising a rally and march. Assemble 12.30pm outside Trades Hall (corner Victoria and Russell Streets). [Youse can join the Socialist Alliance for a toast before the march @ the Resistance Centre (Level 5, 407 Swanston St, City (opposite RMIT)) if youse wanna.]

Following celebrations @ Trades Hall, from 4pm the Melbourne Anarchist Club will be enjoying May Day with music, drinks and food. There’ll be acoustic sets from Wil Wagner, Tom Denton (Sweet Teens), A Commoners Revolt (solo) and Jim Power (Ducks in the Mud). NB. The original Melbourne Anarchist Club was formed on May 1, 1886, making 2011 the 125th anniversary of anarchism in Australia.

The Moar You Know… 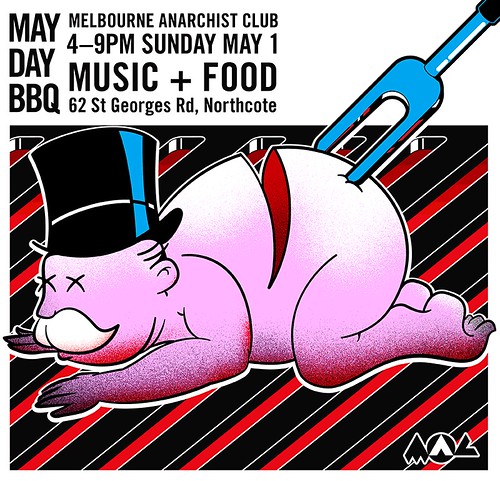 I dunno if there’s anything else on, but feel free to lemme know if there is.

Yes, we are having a combined bake sale and bake off to celebrate Autumn and homemade delicious vegan treats! Bring along your best homemade vegan treat to donate and be in the running to win prizes! Judges are those that buy and taste the wares and there’s also a Best in Show prize as well. Donate, or just come along and buy from the wonderful range of yummies on offer. GET YOUR BAKE ON!

And of course, @ 4.40pm Collingwood will be playing the Western Bulldogs @ the MCG.

I live in Melbourne, Australia. I like anarchy. I don't like nazis. I enjoy eating pizza and drinking beer. I barrack for the greatest football team on Earth: Collingwood Magpies. The 2021 premiership's a cakewalk for the good old Collingwood.
View all posts by @ndy →
This entry was posted in Anarchism, History, Music, That's Capitalism! and tagged May Day. Bookmark the permalink.