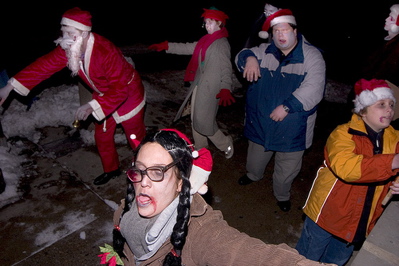 BERLIN (Reuters) – Drunken Santas on a rampage in New Zealand, armed German robbers in Santa disguises, a British St. Nick wanted for flashing, and a Swedish vandal in a Santa outfit are giving the big man in red a bad name this year.

Reports of “Bad Santas” breaking the law or otherwise wreaking havoc have been circulating around the world.

Armed with a gun, a man in a Santa outfit held up a furniture store in the German town of Ludwigshafen Saturday and forced two cashiers to open the safe. He filled his sack with cash, locked the two women in the safe and escaped.

He is still on the loose, but police in Tuebingen were able to nab a bank robber armed with a machine gun in a Santa costume with the aid of an infrared camera and helicopter. They found him hiding in a ditch in a nearby forest.

“The machine gun was fake,” a police spokesman said. Dressed in a Santa cap, beard and wearing sun glasses, he was wanted for stealing 500,000 euros in four separate bank robberies.

One Santa was stopped by police for driving 150 kph (90 mph) on a northern German motorway, 50 kph over the speed limit.

“He said he was in a rush because he still had packages to deliver,” said a spokesman for the police. They gave Santa a fine and took away his license.

That incident paled in comparison to what happened in Auckland Saturday when 40 drunken Santas rampaged through the city center, stealing from stores and assaulting security guards in a protest against Christmas becoming too commercial.

In Britain, police said they were looking for a Santa acting suspiciously — a flasher who exposed himself to women.

Officers in Swanage on the south coast of England said the flasher had struck a number of times since December 6, and a week later exposed himself whilst wearing a Santa Claus outfit.

A British agency recently issued a code of conduct to root out substandard Santas. “Santa is a magical and cuddly man, not a fat, smelly slob,” said James Lovell of the Ministry of Fun agency in London. “He must not smell of drink or body odor.”

Police are hoping the drunken antics of 50 men in Santa Claus outfits at the weekend is not the start of a regular problem at this time of year.

The group, participating in this year’s “Santarchy” – Santa anarchy – stole from shops, urinated in the streets and threw rocks at buses in downtown Auckland on Saturday.

“It’s just a pack of clowns, just a bunch of idiots getting together and taking the opportunity to be relatively anonymous by all wearing the same clothing, making it difficult to identify who’s done what,” said Senior Sergeant Matt Rogers.

He hoped the problems this year were a one-off event at a time when office and end-of-year parties already whet people’s appetites for alcohol.

“We hope people go out and have a good time and behave in a civilised manner, but if people can’t, police will deal with it appropriately.”

Police arrested three men and will charge a fourth after the group hurled glass bottles at several security guards.

Two of the guards were treated for cuts to the head.

“We started getting phone calls from the public at 5.15pm. They were at Britomart, behaving loutishly, just being silly.”

About 6pm the group, which had shrunk from 50 to about 20, made their way to Princes Wharf, where one adventurous Santa scaled the mooring rope of a cruise ship.

When he came back down, several security guards grabbed him, sparking the flurry of flying bottles.

Auckland Chamber of Commerce chief executive Michael Barnett said he was disappointed that a stronger signal wasn’t sent out about public disorder.

“It’s a bit disappointing that the law is not being enforced that sends a strong signal to the rest of them and to anyone else who thinks this is humorous,” he said.

“There’s a group of people obviously organised and going into shopping areas and just intimidating shop owners and operators.”

Alex Dyer, who organised the Santa spree, explained Saturday’s antics as a group of men who liked having a drink and a laugh.

“It doesn’t mean anything and it’s not against anyone. It’s just having fun. That’s what life’s about.”

While Mr Dyer did not condone illegal behaviour, he washed his hands of any responsibility.

“I can’t physically restrain people from doing stupid things. I can’t say, ‘Okay 50 drunk men, all listen to me: Please, nobody do anything stupid’.

“If someone does something stupid and gets caught for it, that’s their problem.”

He said Saturday was not an anti-commercialisation protest.

“People do Santarchy in other countries, sure, and for them maybe that’s their aim, but with us we’re just dressing up as Santa and getting drunk. We just like booze.”

I live in Melbourne, Australia. I like anarchy. I don't like nazis. I enjoy eating pizza and drinking beer. I barrack for the greatest football team on Earth: Collingwood Magpies. The 2020 premiership's a cakewalk for the good old Collingwood.
View all posts by @ndy →
This entry was posted in Anarchism, Poetry. Bookmark the permalink.
Login