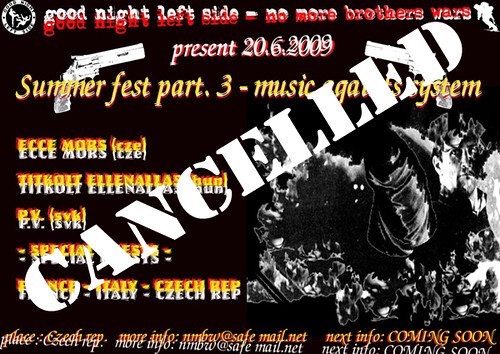 Czech neo-Nazis have cancelled a gig scheduled for June 20 in Prague. The gig — promoted on MySpace — was organised by the local franchise of Blood & Honour, members of the neo-Nazi Workers’ Party (DS) and a local businessman (Martin Franěk, owner of ‘Hate Core Shop’). Not playing at the event are Czech band Attack and Slovakian bands Before the War and Project Vandal. Also not playing are US bands H8Machine and the Bully Boys.

The cancellation follows a series of arrests — including the arrest of Franěk — by Czech police. The arrests were made, seemingly, on the basis that such gigs are unlawful, promoting as they do the virtues of “neo-Nazism, racism and xenophobia”. Video footage of the raids and photos of some of the items confiscated are available here.

In Australia, the promotion of “neo-Nazism, racism and xenophobia” by neo-Nazi organisation ‘Blood & Honour Australia’ (and fellow boneheads belonging to the ‘Southern Cross Hammerskins’) is a lawful activity, as is the production and distribution of neo-Nazi propaganda. Thus the two groups are organising gigs in Melbourne (Victoria) on September 12 and the Gold Coast (Queensland) on April 17, 2010. Neo-Nazi propaganda — including the awesomely titled album ‘Freezer Full of Nigger Heads’ by US neo-Nazi grindcore band ‘Grinded Nig’ are available locally through 9% Productions. 9% also has a happy home on YouTube. The 65,000 Australian fans of Facebook group ‘Fuck Off, We’re Full’ will also be delighted to learn that 9% sells a t-shirt especially for them, at the bargain basement price of just $25 (plus postage). Note also that the Bully Boys had no trouble touring Australia in 2004.

The arrests triggered protest rallies by small groups of neo-Nazi supporters in Prague and a number of other towns and cities in the Republic. At one such rally in Most, North Bohemia, on June 14, Peter Kotab, the leader of the Workers’ Party, found it all too exciting and collapsed while being arrested by police. Kotab was one of 15 neo-Nazis detained by police. “In Zlin, south Moravia, a meeting of ultra-right radicals ended up in a clash with anarchists on Saturday. The police in Zlin detained three men. Two anarchists were accused of rioting and an ultra-right radical was later released without being accused” (Police detain 15 rightist extremists, Prague Daily Monitor / ČTK, June 15, 2009).

Prague – The organisers have cancelled a concert of far-right music bands which was to take place in north Bohemia at the end of June in reaction to the police raid against extremists last week, according to the information published on the event’s official website.

The Call of Freedom concert was to start by speeches of representatives of the far-right Workers’ Party (DS), which were to be followed by the performance of music bands from several countries.

Last week, Czech police accused ten far-right radicals of having organised concerts as according to the police, the concerts are abused for the promotion of Nazism and fascism.

“Our event has been cancelled. Please, inform your friends about this,” the website writes.

According to the invitation placed on the Internet, the DS was organising the concert together with the Hate Core Shop.

The fliers placed on the website of the shop say the DS wanted to celebrate at the concert its success in the elections to the European Parliament in which it received 1.07 percent of the vote.

Hate Core Shop head Martin Frank is reportedly one of the radicals whom the police detained and accused last week.

According to Ondrej Cakl, expert who has been monitoring the ultra-right scene for a long time, [Frank] is one of the main organisers of neo-Nazi concerts.

Last Tuesday, detectives from the organised crime unit (UOOZ) detained ten radicals. According to the police, they all are members of the neo-Nazi National Resistance group.

The police accused them of organising 11 concerts since last April being aware that both participants and the audience were spreading the ideas of neo-Nazism, racism and xenophobia at the concerts.

Five of the detained persons have been taken into custody.

On November 10, 2007, on the anniversary of Kristallnacht, Czech neo-Nazis, reinforced by scores of German neo-Nazis, attempted to organise a march through the Jewish quarter of Prague.

Things didn’t quite go according to The Master (Race) Plan…

See also : Czech teenagers losing trust in police – survey in press, České Noviny [Czech Happenings], May 21, 2009, which reports that “The study shows that current young people have a more positive stance on Romanies. Three years ago, one-fifth of young people took a racist position, which is 1 percent more than in 1991. In 1991, 12 percent of young people expressed anti-racist attitudes, while in 2006 it was 43 percent.” | Czech media getting bad press over extremism, Christian Falvey, Radio Praha, June 6, 2009: “The Czech media is regularly ranked as one of the freest in the world, but recent events have called into question how well that freedom is utilised where political extremism is involved. Stemming from a number of heavily publicised incidents in recent weeks, many people are asking if it’s in fact media attention that’s actually feeding the occurrence of right-wing extremism. This week’s Talking Point discusses the events that have brought the journalists themselves into the spotlight.” [Audio]

Recorded LIVE! in the studio by Jesse and last year’s guests of B&H and the SCHS, Belgian neo-Nazis ‘Kill Baby Kill’. The video is proudly hosted by YouTube, and KBK is proudly hosted by MySpace. Note that KBK vocalist Dieter Samoy had a crack at killing a blackfella in 2006: he failed, but points for trying. I suggest the boys get jobs at GSL: it’s a license to kill baby kill!

I live in Melbourne, Australia. I like anarchy. I don't like nazis. I enjoy eating pizza and drinking beer. I barrack for the greatest football team on Earth: Collingwood Magpies. The 2023 premiership's a cakewalk for the good old Collingwood.
View all posts by @ndy →
This entry was posted in Anti-fascism, State / Politics and tagged Blood & Honour, Czech Republic. Bookmark the permalink.