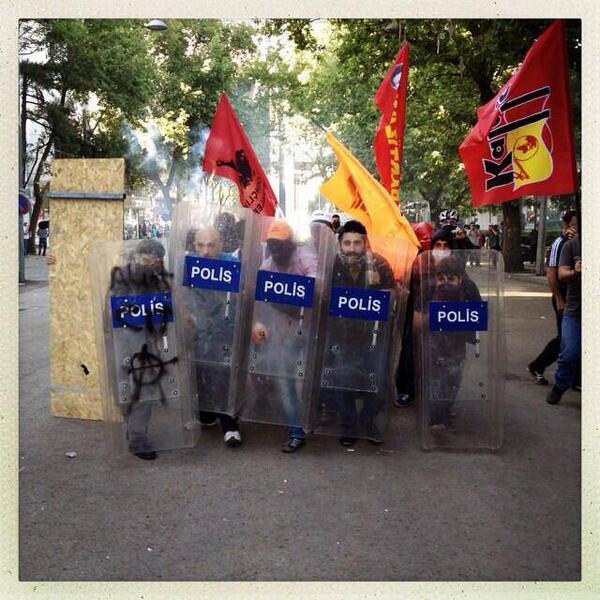 Interesting times in Istanbul. The protests appear to be growing, but who knows where they’re going.
I’m not sure what are the best English-language sources for what’s going down, but libcom will no doubt throw up some interesting links and accounts in the coming days.
In the meantime I recommend Dave’s blog, Citizen K, for updates and infos. Dave’s on the ground in Istanbul and hopefully keeping safe.
Some token links to @ groups/projects in the state of Turkey: Aforum | anarsi.org | karakok.org

The Turkish media, for the most part, are pretending this isn’t happening. So people are using Twitter, Facebook and Tumblr to communicate to the outside world what’s happening. When independent media emerged in Seattle in ’99 it was at least semi-reliable. The crap that people are thoughtlessly retweeting makes for depressing reading. I think “Let’s request and early election” is probably the most ridiculous. Yes, let’s do that. This is not the Turkish Spring…

Despite my reservations on the potential success of #occupyturkishhashtags, I went to Taksim today. The cops have surrendered it to the protesters, and from Istiklal to Mecedikoy there wasn’t a polis officer to be seen (note: they were in Besiktas, gassing the crap out of everyone). The experience was interesting – at times the atmosphere was like a giant political rally, at times it was like a football riot, at times it was like the sectioned area we had for two and a half days at S11 in Melbourne in 2000 – a Temporary Autonomous Zone.

Finally, a statement from some anarchists in Istanbul, ‘Massive Riot Against State Terrorism in Turkey’ (June 1):

This is an informative mail about current situation in Istanbul, Turkey.

After two days of protest about the urban gentrification of Gezi Park (biggest park in Taksim where green areas continually being destroyed), people got fed up with police brutality and violence.

Especially silence of the media, increasing attacks of government and freedom of individuals, imperial aims of the state trying to take advantage of the Syria have expended the recent conflict in riots.

The clashes continued all day and night yesterday. At least seven civilians were murdered by the police attacks, hundreds were injured, hundreds are in custody where they are beaten up and some tortured.

All temples of capitalism had to close down in Taksim. There is a great deal of solidarity on the streets, many small shops and homes, universities; all pharmacies opened their doors to protesters. Turkish Chamber of Architects and Engineers Office is turned into a hospital with volunteer doctors and nurses. And they are treating wounded protesters.

In many places in Istanbul, police stations has been attacked. Fascist groups were beaten up by anarchists. People from the Asian side who wanted to join the riot were blocked by the police, but they walked on the highway after midnight, crossing the Bosphorus Bridge on foot and made it. The Prime Minister blamed the social web informing the murders, and ironically called the people who are sharing news as fascists.

The protest has spread all over Turkey. People are on streets in Ankara, Izmir, Eskisehir, Sakarya, Isparta and many others.

These protests are not only for the Gezi Park as state-suppressed mainstream media claims. The riot is now the revolt of the hundreds of thousands of people protesting against state oppression and violence. We as revolutionary anarchists have been and we are going to be on the streets, against the police violence state terrorism.

We are expecting solidarity action from all anarchists and anti-authoritarians all around the world.

Everywhere is Istanbul and everywhere is resistance against state terrorism, police violence and capitalist exploitation.

We will continue to report as riot continues.

I live in Melbourne, Australia. I like anarchy. I don't like nazis. I enjoy eating pizza and drinking beer. I barrack for the greatest football team on Earth: Collingwood Magpies. The 2021 premiership's a cakewalk for the good old Collingwood.
View all posts by @ndy →
This entry was posted in Anarchism, Anti-fascism, Broken Windows, Death, History, Media, State / Politics, Student movement, That's Capitalism! and tagged #occupygezi, #TaksimSquare. Bookmark the permalink.