[FWIW: TAV is the italian acronym for Treno ad Alta Velocità i.e. HSR, High-Speed Rail. In essence, opposition to ‘inappropriate’ (capitalist) development in Italy is being criminalised under the rubric of anti-terrorism. Ho hum. On a vaguely-related note see also Berlusconi’s guilty sentence: all you need to know, Giovanni Tiso, Overland, August 2, 2013.] 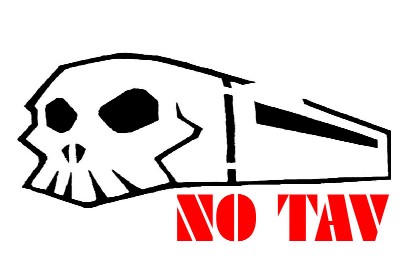 NO TAV movement again under attack

For twenty years in mountains of North West Italy, not far from Torino, a powerful movement has grown that has resisted the Italian government’s plan to build a high velocity railroad, which in addition to being very costly and economically useless would certainly destroy the mountain environment. Over and over, the NO TAV movement, now well-known throughout Europe, has come under attack by the police and the army, besides being the object of a smear campaign by politicians of almost every political stripe. However, so strong has been the determination of the people of Val di Susa and their many supporters to resist this assault on their land and their lives that so far no real construction has taken place and all that the companies in charge of the project have achieved has been to surround thousands of acres of land, belonging to the local population, with barbed wires and cops.

It is now generally recognized, even at the EU level, that the construction of the high velocity railroad is unnecessary, so that some participant countries have already withdrawn from the project. Nevertheless, the Italian government has even further intensified its attack on the resistance to the TAV trains, with the full militarization of Val di Susa. As the villagers of this beautiful historic valley, near the border with France, the center of the partisan resistance to Fascism and Nazism in the ‘40s, have repeatedly denounced, no effort has been spared to repress ideologically and physically the legitimate protest of the residents of the valley who would bear every day the consequences of the TAVS. Already the land of Val di Susa has been drenched with tear gas, and many have been arrested, wounded, and some have even died because of the government’s outrageous determination to complete this work regardless of its devastating consequences for the people of the valley.

Now a new violent assault on the No TAV movement is unfolding that demands a clear response by all those in and out of Italy who believe that the systematic destruction of our environment and the violation of people’s most basic needs and demands are crimes that affect us all and we should not tolerate.

On Monday morning, July 29, the DIGOS – the political branch of the police – has raided dozens of homes in Torino and in Val di Susa. Twelve comrades have been forced to open their houses to its agents, who have then proceeded to search for incriminating materials, presumably related to their protest against the enclosure of the land of the valley with hedges of barbed wire. Instructed to look for explosives and cutters, the police have failed in this goal, but they have confiscated all the audio-visual and telecommunication materials they could find, clearly the real objective of the search. As one of the activists raided put it: “They came for weapons, they left with computers and phones”.

The raid has included the restaurant La Credenza – a name that in Italian significantly means both ‘faith’ and ‘pantry’ – a public place of meeting and aggregation for No TAVS in Val di Susa, where workers’ unions and political associations are also located. This is a place where every day people meet to discuss current events, mostly relating to the struggle, as well as share some food and a glass of wine. Whoever goes to Bussoleno, the heartland of the NO TAV struggle, passes through it, to have a chance to talk to local people, check on current events, and have a great dinner. But the magistrates paint it as a place of conspiracy, to support the charge that motivates the raid: involvement in “attacks with terrorist and subversive intent.”

Anyone who has been in Val di Susa, or has followed the long history of the protest its people have mounted against the TAV knows this charge is false, outrageous, and is a classic example of blaming the victims. Not surprisingly the “proofs” are manufactured.

At one of the houses raided, a map of the valley was found with marker-signs on it. The young woman living there is a member of the Legal Team for the movement, and the map is part of the material that she was to submit to the defense in trials that are already taking place against some of its members. On it, the sites are marked where in 2011 several people were brutalized by the police. But according to the investigators, the map proves the existence of a militarily organized guerrilla movement.

Similarly, beer bottles presumably found on the construction site are presented as evidence for the presence of Molotov cocktails, no proof given that they ever contained anything but beer. Black T Shirts too were confiscated, though it is hard to imagine what they could prove. But the meaning of the police operation comes forth most blatantly where the magistrates state that those raided are investigated as suspects of “attacks with terrorist intent.”

In sum, the goal of this new operation is to escalate the assault on the movement by representing it, legally and through the media, as a ‘terrorist’ movement – a move obviously intended to scare its supporters, turn public opinion against the people of Val di Susa, and legitimize any violence the state will deem fit to unleash against them.
We do not think this operation will succeed. The people of Val di Susa have fought the fascists, have fought the Nazis, and for twenty years they have been able to push back the attempt of the Italian government to destroy their mountains, already traversed by many railroad lines and a recently constructed highway. However we should not underestimate the will of the government to crush this movement. This in fact appears to be the primary objective of the present operation, as reports indicate that, even from a capitalist viewpoint, the TAV project is turning out to be economically unfeasible. Why to pursue it then with so much obstinacy, to the point of stomping over the lives of thousands of people? Is it because the Italian government cannot admit that when people struggle in a unified way they can win? Or is it that the profits that private companies would make would outweigh the failure of the project to bring any benefit to the country as a whole and outweigh as well the immense agony and loss inflicted on the people of Val di Susa?

Politics these days has a surreal character. Lies, distortions, arguments motivated solely by the narrowest of private economic motives are the order of the day. But the fictitious character of the charges brought against the victims of the raid should not deceive us about the damage they can inflict. At the very least these attacks are forcing a movement to re-channel its energies from the struggle against the TAV to the defense of those under attack.

This is why we need to support the NO TAV activists under investigation, we need expand our support for the NO TAV struggle, and send a clear message of protest to the Italian government, demanding it ends the persecution of the No TAV activists and put an end to the TAV project itself.

We urge the Italian government and judiciary to:

*End its arbitrary use of the law to persecute No TAV activists;
*Cease the investigation against the twelve people whose homes have been raided;
*Stop the militarization of Val de Susa;
*Listen to the legitimate protest of the people of Val de Susa and abandon the TAV project itself, which has already caused so much suffering to so many people.

I live in Melbourne, Australia. I like anarchy. I don't like nazis. I enjoy eating pizza and drinking beer. I barrack for the greatest football team on Earth: Collingwood Magpies. The 2023 premiership's a cakewalk for the good old Collingwood.
View all posts by @ndy →
This entry was posted in Broken Windows, State / Politics, That's Capitalism! and tagged Italy, No TAV. Bookmark the permalink.