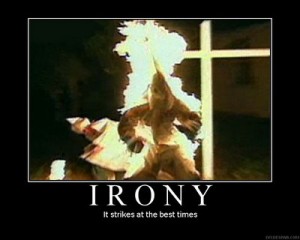 The Facebook page ‘Anarchist Memes’ has been unpublished by Facebook. Ben Norton has written an article in response, published at Counterpunch and Dissident Voice. The reasons why Facebook chose to close the page are a bit obscure: precisely how it transgressed the site’s guidelines is unknown. Ben writes that recent acts of censorship included:

a picture of a Klansman who had accidentally set himself, instead of a large wooden cross, on fire, accompanied by the words “IRONY, it strikes at the best of times” … a picture featuring a portrait of famous Ukrainian anarchist communist Nestor Mahkno with the text “You may be anti-racist… but are you shoot anti-Semites on sight anti-racist?” … a picture simply reading “Some women have penises. Get over it!” … [and finally] an Eat That Toast! cartoon depicting how strange stalkers who consider themselves “nice guys” really look to others.

Controversial images and ideas, perhaps, but hardly ones which would seem to violate either laws or ‘community standards’.

Anyway, while I have some disagreement with Ben’s analysis of anarchism, his article is worthwhile reading and, as he notes, Facebook’s policies regarding the limits of legitimate public expression are important to keep track of and respond to.

I live in Melbourne, Australia. I like anarchy. I don't like nazis. I enjoy eating pizza and drinking beer. I barrack for the greatest football team on Earth: Collingwood Magpies. The 2021 premiership's a cakewalk for the good old Collingwood.
View all posts by @ndy →
This entry was posted in Anarchism, Media and tagged Anarchist Memes, Facebook. Bookmark the permalink.