John Shipton, CEO of the WikiLeaks Party (and Assange’s old man), recently sat down for a nice cup of tea with that nice man Bashar al-Assad, President of Syria and General Secretary of the Ba’ath Party (Bashar was of course preceded as President by his old man, Hafez). Accompanied by other senior Party members and Sydney academic Tim Anderson, the trip was ostensibly a “fact-finding mission”. Not unexpectedly, it raised a number of eyebrows. 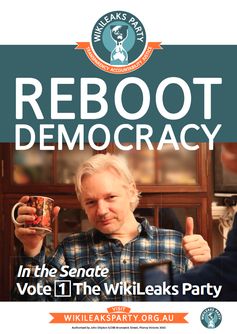 Asked in an interview with ABC radio what his discussion with Bashar consisted of, Shipton stated that he posed Bashar two questions: one, was Bashar going to declare war on Saudi Arabia? and two (sic), the status of several imprisoned Internet activists. Shipton doesn’t state what the answer to his first question was but claims that the Party has entered into negotiations with the government regarding the release of imprisoned bloggers. While they’re not named, this group would presumably include folks like Bassel Khartabil, among others.

In any event, the occasion got me thinking: what’s the position of the Australian left on Syria? For the Marxists, it’s mostly opposition to war (ie, US/NATO military intervention) accompanied by varying degrees of antipathy towards Assad. Thus SA and SAlt reckon Assad is Bad (Assad’s backers on the left are ignoring reality, Michael Karadjis, May 5, 2013; Syria: support the revolution, oppose US bombing, Vashti Kenway, September 8, 2013/Stop the US-led war on Syria!, August 28, 2013), while the CPA/CPA(ML) is neutral (People of the world demand HANDS OFF SYRIA!, September 4, 2013/Hands off Syria!, January 27, 2013), the Spartacists (ICLFI) hold the line in Imperialists’ Hands Off Syria! (Australasian Spartacist, No.221, Spring 2013), while the most detailed statement by the Northites (ICFI) is that by David North/(Green): US imperialism and the proxy war in Syria (September 9, 2013).

Curiously, North refers to the SSNP, noting that “On April 22, 1955, [senior Syrian military figure] Malki was assassinated while attending a soccer match by a member of the pro-US and right-wing Syrian Social National Party. An official investigation into the assassination found that the US was a major supporter and financier of the SSNP. It was well known that the SSNP had close ties with the CIA.” Committed to the (re-)construction of a Great(er) Syria, I last read reference to the SSNP via its participation in the Sydney Forum, the Australia First Party’s annual conference. And AF, of course, gained some inadvertent publicity when, somehow or other, it managed to sneak ahead of various other worthies on the WLP preference list in NSW …

I live in Melbourne, Australia. I like anarchy. I don't like nazis. I enjoy eating pizza and drinking beer. I barrack for the greatest football team on Earth: Collingwood Magpies. The 2021 premiership's a cakewalk for the good old Collingwood.
View all posts by @ndy →
This entry was posted in !nataS, Media, State / Politics, That's Capitalism!, Trot Guide, War on Terror and tagged John Shipton, Syria, Wikileaks Party. Bookmark the permalink.