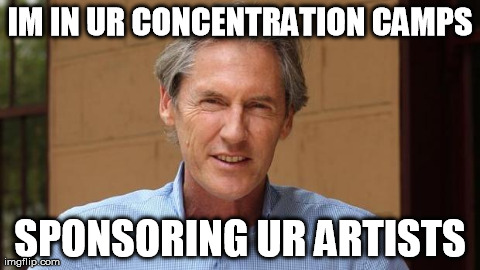 “The Biennale of Sydney has taken the correct and only viable course of maintaining its partnership with Transfield.”
~ Matthew Westwood, The Australian, February 25, 2014

“Well I just think that there’s a lot of black noise here where the public discourse has been taken over by these people concerned about the refugee situation — and that’s fair enough that people are concerned about [the] refugee situation — but to target the Biennale as they have targetted [it] with this perceived sponsorship of Transfield Services is I find it offensive to start with and I find it misleading at best … What I object to is people that are trying to exploit, if you like, this public event for their political agenda as important as that political agenda might be. It’s not for them to take a position within the event when they actually have no particular role within the event … What I object to, strongly, is that people outside of the Biennale are now critical of the Biennale for not somehow addressing the issue of refugee rights when in fact there is such tenuous connection or indeed, not only just tenuous, but there’s an argument that nothing that the Biennale or its supporters is doing is wrogn.”
~ Luca Belgiorno-Nettis, PM, February 24, 2014

“The boycott, like the social-media protest, will work short-term just, as Milliss has it “to assuage art world feelings of powerlessness or horror”.”
~ Helen Razer, Daily Review, February 20, 2014

Transfield shares climbed 24.5 per cent to 99¢ in heavy trade on Monday after the company said the Abbott government had granted it a 20-month contract to operate a centre on Manus Island in Papua New Guinea that has been beset by deadly violence.

Transfield, which was until October chaired by Tony Shepherd, who is heading the government’s Commission of Audit, replaces UK-listed G4S. Violence at the centre last week claimed the life of one detainee and forced the Minister for Immigration, Scott Morrison, to admit he had initially provided incorrect information about the fracas…

• There have been several sources of ‘correct information’ regarding events and processes at Manus Island in the past few days. Former administration worker and interpreter Azita Bokan was interviewed by Richard Glover on ABC Sydney last Friday (February 21, 2014) while migration agent Liz Thompson has been interviewed by Marni Cordell for New Matilda and by Mark Davis on Dateline (February 25, 2014). Both were compelled to blow the whistle on conditions at Manus and should be congratulated for their courage in doing so.

• Immigration lawyer Wenny Theresia has penned a response to the letter by the Board of the Biennale of Sydney — the one in which it pledged undying loyalty to the Belgiorno-Nettis family, declared that the Biennale is synonymous with the Transfield brand, and which was in turn a response to the ‘Open Letter to the Board of the Sydney Biennale From Participating Artists’ (February 19, 2014) — which you can read on the xclnt xBorderOperationalMatters blog here. Tomorrow it will be the artists turn to respond.

• Finally, this Saturday in Melbourne there will be a rally at the State Library at 1pm to demand the closure of the prison camps on Manus and Nauru.