• Lots of butthurt is being expressed by local nazis w regards the dismal rally Australia First and Golden Dawn stoopidly organised last week. This will carry on for some time I expect, along w mutterings about the Dark Forces ranged against them. So too will claims that the rally — contrary to all the evidence — was a roaring success. Ho hum.

Curiously, the leader of GD in Australia, Iggy Gavrilidis, has posted pictures of AF and GD members and supporters taken not at the rally but at some point before or after it — then claimed to the nazis back home in Greece that this comprised the rally! (It’s also slightly odd that a handful of the men who appear in the photos did not attend the abortive rally …) 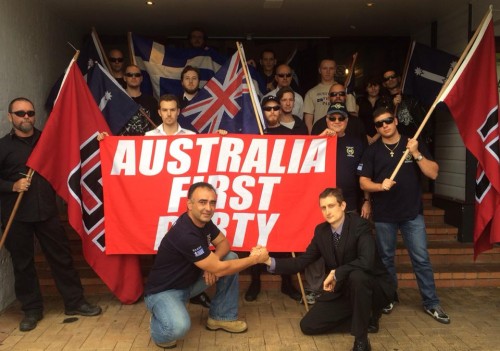 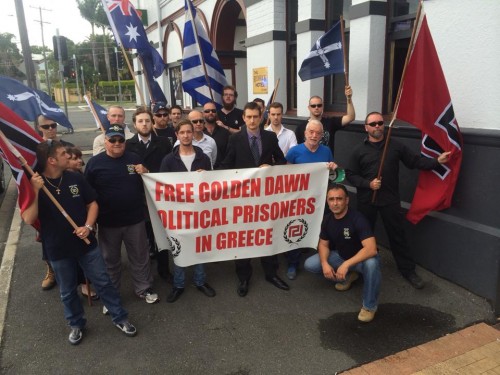 • The Australian Golden Dawn’s Rally in Brisbane Was an Embarrassing Failure writes Lauren Gillin (Vice, May 7, 2014).

• The Online Hate Prevention Institute has published an article on Social Media, Golden Dawn and Australia’s Far-Right (May 7, 2014).

• Antony Loewenstein has written an article on why Australia’s far-right fringe groups must not be allowed to become mainstream (The Grauniad, May 6, 2014). Pro-tip: never read the comments.

• I was briefly interviewed by 2SER and 4ZZZ earlier today: I may throw some links up later.

• In Greece, there were fascist tears in parliament as it voted to lift the immunity from prosecution of all (current and former) GD MPs. As one Tweeter noted:

Tough and brutal against immigrants, crying in parliament to escape jail. That's the face of the Golden Dawn.

• In Hungary, Tamas Sneider, a former bonehead, has been appointed deputy speaker in the national parliament. In Germany, Deutsche Welle has published a Chronology: Year one of the neo-Nazi NSU murder trial.