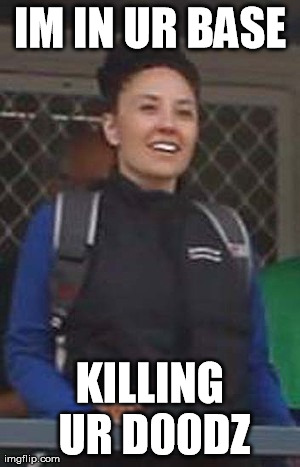 While in the UK Women deceived by undercover officers back in court to challenge police’s “delaying tactics”,* in Australia Fairfax’s Tom Allard reports that corporations have been doing what corporations do: spying on activists, in this case anti-coal mining malcontents. In April 2012, then Attorney-General Nicola Roxon stated on Q&A that “there may be people and unfortunately we do see a growing number of links across some sort of groups who are anarchist, others who meld into some religious, sometimes, and intent with committing a terrorist offence that might link in with other protest groups…”

If that mAkEs SeNsE?

The case reported on by Allard seems to conform to the general pattern of corporate spying:

• official denial;
• close cooperation with the state;
• disregard for legal niceties;
• obscuring the ultimate legal and political responsibility for the infiltration and covert surveillance through a series of private contracts with a range of agencies;
• beaming, well-paid, lying yuppies.

Obviously, anyone involved in any form of political activism should expect to be spied upon, both by the state and corporate sector. One of the mildly disturbing aspects of this account, however, is the reaction of one of the spies when confronted by activists. “Confronted on camera”, Marnie Tisot — Professional Service Solutions’ ‘Operational Risk and HR Advisor’ and ‘a highly respected project leader with more than 10 years experience in delivering projects and services across government organisations and commercial industries’ —

… denied she was working undercover, breaking down in tears and saying she had assumed her false identity to escape the attention of a violent ex-husband. She also said she had stopped working for PSS.

However, Ms Tisot continued to use her real name once she left Maules Creek and returned quickly back to work at PSS after being detected.

Her emotional story about fleeing a violent man was also undermined by the prominent profile and photograph on the PSS website and the fact there were business cards in her name with her mobile number at the office of PSS last week. In a brief interview with Fairfax Media, Ms Tisot declined to outline what she was doing at Maules Creek but referred Fairfax to her explanation on video.

However, multiple sources familiar with the operation have confirmed to Fairfax that Ms Tisot was working as an intelligence operative for CIRM.

The construction of a plausible back-story is a crucial aspect of infiltration, as is the existence of a plausibly deniable reason for, say, adopting another name, being in a certain place at a certain time, and so on.

While Marnie appears to have closed her Twitter and LinkedIn accounts, she has written several online articles, which make for very interesting reading given her lying and spying:

• Can I Read Your Mind?
June 29, 2011
“Many successful people swear by their ability to read others and use ‘gut feeling’ to make decisions. But is there a hard science behind reading people, and can it be learned?”
• Relationships: Make or break businesses.
November 7, 2012
“According to Marnie Tisot, Transport Security Inspector at the Department of Infrastructure and Transport, relationships make or break ideas, projects and even businesses.”
• Track me if you can
August 16, 2013
“Employee tracking – arguably useful, always controversial. This week we are talking about tracking employees who travel, particularly to high-risk destinations. Today we see an increasing number of devices, apps and systems available to track and monitor people who travel internationally or work alone and in remote locations. So what should you think about when considering a tracking solution for your corporate travellers?”

* See the Police Spies Out of Lives blog, a “support group for women’s legal action against undercover policing” for moar infos.