In a few weeks time there will be a series of actions in support of imprisoned Australian Jock Palfreeman. Jock is currently serving a 20-year sentence in Bulgaria for murder and attempted murder. For more details on Jock’s case, please see the Free Jock website and Every Parent’s Nightmare, the site dedicated to ABC journalist Belinda Hawkins’ book about Jock. See also : Australian Activist Jock Palfreeman Is Taking On Bulgaria’s Prison System From the Inside, Danica Radisic, Global Voices, July 3, 2014. 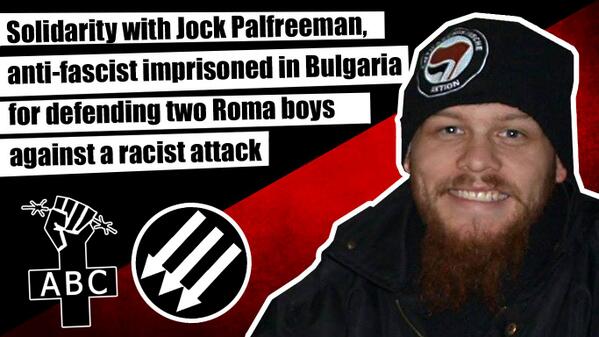 In the Netherlands (Amsterdam): Anti Fascist Action have organised a benefit gig for July 16.

In the United States: A DAY OF SOLIDARITY WITH ANTIFASCIST PRISONER JOCK PALFREEMAN- JULY 25TH.

In Australia (Melbourne): a benefit gig is being organised for Sunday, July 27.

You can write to Jock at:

I live in Melbourne, Australia. I like anarchy. I don't like nazis. I enjoy eating pizza and drinking beer. I barrack for the greatest football team on Earth: Collingwood Magpies. The 2023 premiership's a cakewalk for the good old Collingwood.
View all posts by @ndy →
This entry was posted in Anti-fascism, State / Politics and tagged Jock Palfreeman. Bookmark the permalink.