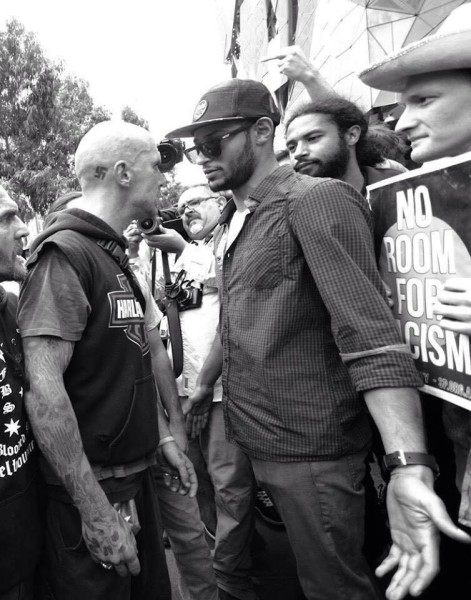 Above : Iconic img of confrontation between a neo-Nazi skinhead and a counter-protester at Reclaim Australia rally in Melbourne.

On Facebook, one Reclaim Australia supporter has opined that the appropriate punishment for burning the Australian flag is death by gang rape:

FWIW, Dean Luland works @ Period Home Brick Restoration [Facebook page], so if you live in Sydney and would like to hire someone to restore your house, it may be worthwhile taking your business elsewhere.

In other news, a Melbourne man by the name of Rod Mathers has vowed that he and his mates will be attending the rally to ‘Stop the forced closures of Aboriginal communities’ on Friday in order to assault members of the Socialist Alliance, a group he holds responsible for an alleged assault upon a Reclaim Australia supporter on Saturday:

It’s obviously unknown how srs Mr Mathers is, but those attending the rally should prolly keep an eye out for ‘patriots’ intent on attacking the rally and march …

I live in Melbourne, Australia. I like anarchy. I don't like nazis. I enjoy eating pizza and drinking beer. I barrack for the greatest football team on Earth: Collingwood Magpies. The 2023 premiership's a cakewalk for the good old Collingwood.
View all posts by @ndy →
This entry was posted in Anti-fascism, Broken Windows, State / Politics, Trot Guide and tagged Dean Luland, Melbourne, Period Home Brick Restoration, Reclaim Australia, Rod Mathers, Socialist Alliance, Stop the forced closures of Aboriginal communities. Bookmark the permalink.