There are two events on in Melbourne this weekend which may be of interest.

This free community forum is hosted by No Room for Racism and supported by the Islamic Council of Victoria. The forum will consist of a panel of speakers followed by discussion on how to counter the growing threat of right-wing, racist and Islamophobic groups like ‘Reclaim Australia’. The forum will be used to prepare for the July 18 ‘Rally Against Racism’ (counter-demonstration to ‘Reclaim Australia’).

The forum will be co-hosted by Monique Toohey & Cllr Stephen Jolly. If you are concerned about rising Islamophobia and want to join the fight against racism come along and get involved! The time to get organised is now. (Everyone is welcome except Islamophobes & racists.)

2) Also on Sunday, in Richmond, ‘Reclaim Australia’ splinter group ‘United Patriots Front’ will be assembling in Citizens Park before marching to an empty Richmond Town Hall, where they’ll be ranting and raving about Muslims and leftists. A counter-rally has been organised by the ‘Campaign Against Racism and Fascism’. Start time for the CARF event is noon, but there will be other folks ITA from 11am …

3) In related news, Steve Jolly (Yarra Councillor, Socialist Party) was interviewed by Tom Elliott of 3AW this afternoon on the subject of the UPF’s little Nuremberg rally in Richmond and the Islamophobia forum in the city. You can listen to the interview here. The former face of ‘Reclaim Australia’ turned UPF leader Shermon Burgess is very upset at the interview, because not only was Jolly (“the communist traitor that hates the fucking ANZACs”) given air time, but Burgess’s comrade and fellow UPF leader Neil Erikson (the convicted anti-Semite and neo-Nazi) was not given an opportunity to speak on air. In response, Burgess has published a video on Facebook in which he implores his dwindling number of supporters to call 3AW and to “tell them they are traitors. They are the people helping these communists support terrorists. 3AW you are fucking filth. Oh and another thing, if ya ever want … any interview in future, where UPF gets bigger, ya not gonna fucking get it. You’re a bunch of dickheads.”

For those joining anti-fascists and anti-racists in Richmond, this post by FightDemBack! includes a neat spotting guide to local neo-Nazis, while the Melbourne Activist Legal Network has a good collection of Resources.

4) As previously noted, the UPF leadership in Melbourne consists of two men: Neil Erikson and Blair Cottrell. Both men are anti-Semites and pro-Nazi, although only Erikson has a criminal conviction for the former, while Cottrell claims to have been jailed for arson. In any case, Cottrell is a serious young fascist and further claims to have been inspired to form his ‘National Democratic Party of Australia’ by the events of April 4.

In the same manner as Shermon Burgess has attempted to re-write his history as an Australian Defence League militant — celebrating the deaths of asylum seekers at sea, the anti-Muslim pogroms in Cronulla in December 2005, and advocating the killing of Muslims and the destruction of mosques — so Cottrell has sought to erase his history of online misogyny, racism, anti-Semitism and neo-Nazism. Give the rank ignorance and prejudice which saturates its ranks, it’s unsurprising that none of Burgess’s followers have any ever expressed any reluctance to form a coalition with the neo-Nazi and fascist right — and nothing is likely to alter that situation. Nonetheless, for anti-fascists, it’s worth taking note of who it is that will assemble in Richmond on May 31, in the city on July 18, their views and political perspectives, and what drives the RA and UPF leadership in their self-declared war on Islam and socialism. 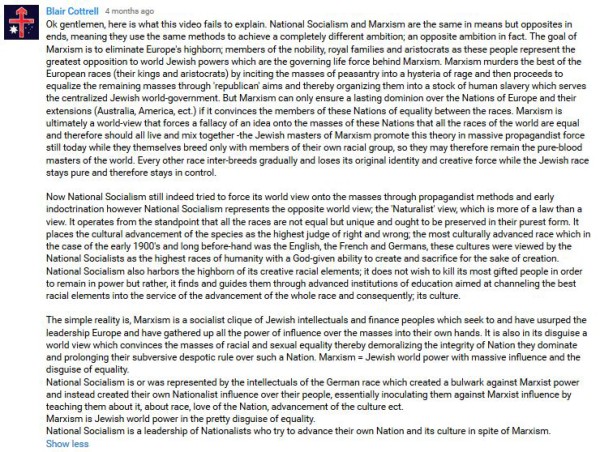