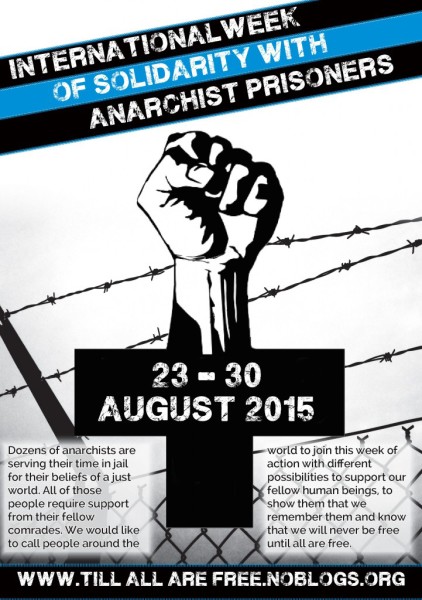 “Call out for an International Week for Anarchist Prisoners

In summer 2013 members of several ABC groups discussed the necessity of introducing an International Day for Anarchist Prisoners. Given there are already established dates for Political Prisoners Rights Day or Prison Justice Day, we found it important to emphasise the stories of our comrades as well. Many imprisoned anarchists will never be acknowledged as ‘political prisoners’ by formal human-rights organisations, because their sense of social justice is strictly limited to the capitalist laws which are designed to defend the State and prevent any real social change. At the same time, even within our individual communities, we know so little about the repression that exists in other countries, to say nothing of the names and cases involving many of our incarcerated comrades.

This is why we have decided to introduce an annual Week for Anarchist Prisoners on August 23-30. We chose August 23 as a starting point, because on that very day in 1927 the Italian-American anarchists Nicola Sacco and Bartolomeo Vanzetti were executed in prison. They were convicted of murdering two men during an armed robbery at a shoe factory in South Braintree, Massachusetts, United States. Their arrest was a part of a bigger anti-radical campaign led by the American government. The State’s evidence against the two was almost totally non-existent and many people still today believe that they were punished for their strong anarchist beliefs.

Given the nature and diversity of anarchist groups around the globe, we have proposed a week of common action rather than a single campaign on a specific day making [it] easier for groups to be able to organise an event within a longer target period.

Therefore, we call on everyone to spread the information about the Week for Anarchist Prisoners among other groups and communities and think about organising event(s) in your city or town. The events can vary from info-evenings, screenings and benefit concerts to solidarity and direct actions. Let your imagination run free.

Check out the flyers in different languages. Please send reports of your activities to tillallarefree (A) riseup.net

Till all are free.”

• Oury Jalloh, a Sierre Leonean asylum seeker in Germany, died in a fire in police custody in Dessau in 2005, while his hands and feet were tied to a mattress.
• Nikos Romanos, a Greek anarchist and convicted armed robber whose best friend aged 15, died in his arms after being shot by police. In 2014, he went on hunger strike for his right to an education, and won.
• Mumia Abu-Jamal, an American political activist and journalist, currently serving life imprisonment without parole for murdering a police officer in Philadelphia in 1981.
• Carlo Guiliani, an Italian anarchist and ‘anti-globalisation’ protester, shot and killed by police in Genoa, Italy at the G8 summit in 2001.
• Halim Dener, a Kurdish activist shot and killed by German special police in Hannover in 1994, while putting up a poster for the ERNK, the National Front for the Liberation of Kurdistan.
• Jock Palfreeman, an Australian anti-fascist unjustly sentenced to 20 years in maximum security prison for premeditated murder in Bulgaria after intervening to protect a Roma who was being attacked by neo-Nazis.
• Joel Almgren, a Swedish anti-fascist, currently serving 6 and a half years in prison for attempted murder, after defending an anti-racist demonstration in Stockholm from a neo-Nazi attack.

I live in Melbourne, Australia. I like anarchy. I don't like nazis. I enjoy eating pizza and drinking beer. I barrack for the greatest football team on Earth: Collingwood Magpies. The 2021 premiership's a cakewalk for the good old Collingwood.
View all posts by @ndy →
This entry was posted in Anarchism, Broken Windows, History, State / Politics, That's Capitalism!, War on Terror and tagged Anarchism, International Week for Anarchist Prisoners, prisons. Bookmark the permalink.