Coming soon from the desk of Kevin Andrews 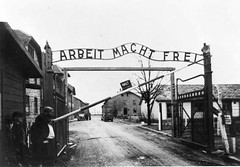 President of southern Chieti province uses ‘work makes you free’ slogan that topped gates at Auschwitz in brochure to promote local job centers, saying he could not remember source but was impressed by quote

Italian politician has used the “work makes you free” slogan that topped the gates at Auschwitz in a brochure to promote local job centers, saying he could not remember the source but was impressed by the quote.

News agency Ansa reported the vice-president of the Jewish community in Rome had sharply criticised Tommaso Coletti, president of Italy’s southern Chieti province and member of the center-left “Daisy” party, for using the quote.

Countless photographs have focused on the “Arbeit macht Frei” sign at Auschwitz to encapsulate the horror of the Nazi death camps.

“Work makes you free. I don’t remember where I read this phrase but it was one of those quotes that have an instant impact on you because they tell an immense truth,” Coletti wrote in the pamphlet, Ansa reported.

Coletti could not be reached for comment and the regional job centres were also unavailable. Ansa said the governor of the Abruzzo region, which includes Coletti’s province, had apologised to Italy’s Jewish community.